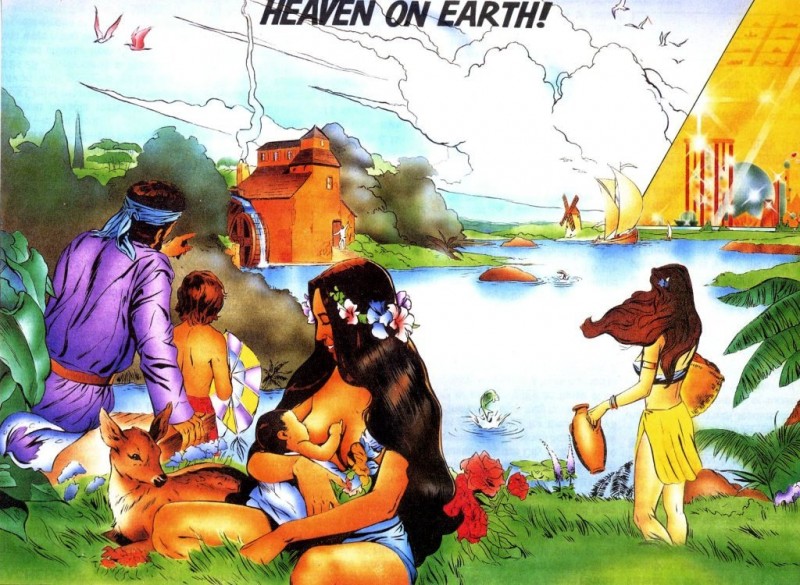 DID YOU KNOW THAT GOD IS GOING TO BRING HEAVEN DOWN TO EARTH TO LIVE HERE WITH US, WE’RE NOT GOING TO GO UP TO HEAVEN TO LIVE WITH GOD? In fact, God’s great Heavenly City is such a real place that the Bible tells us all about its size, shape, colours and even the materials that it’s made of! It will stand on the Earth a gigantic 1500 miles long, 1500 miles wide and 1500 miles high! (Rev.21:1,2 , 10-24)

BUT BEFORE GOD BRINGS DOWN HIS HEAVENLY CITY, HE IS GOING TO COMPLETELY CLEANSE THE ENTIRE SURFACE OF THE EARTH BY BURNING IT ALL UP WITH FIRE! He will then remake and recreate a beautiful New Earth with a beautiful new surface and fresh, clean, new air and a new sky! (2Pet.3:10-13 ; Rev.21:1)

HE’S GOING TO RECREATE THE ENTIRE SURFACE OF THE EARTH into a beautiful Garden of Eden, the Paradise of God! Then the Heavenly City is going to come down from God, out of Space, to land on the beautiful New Earth!

INSIDE THE GREAT HEAVENLY SPACE CITY IS WHERE ALL OF GOD’S SAVED CHILDREN WILL LIVE WITH HIM FOREVER! But outside the City, on the surface of the New Earth, the Bible says there will be whole nations of people who have been raised from the dead and have stood before God’s Great Judgement Throne and have been allowed by Him to live on the beautiful New Earth. (Rev.21:24-26 ; 22:2)

WHEN GOD JUDGED THESE PEOPLE, HE SAW THAT THEY WERE NOT BAD ENOUGH TO HAVE TO GO TO HELL, the Lake of Fire, where the really wicked go to be punished for their sins. But because they had not received Jesus and His free gift of Eternal Life, they couldn’t go to Heaven either.–And it looks like some of them maybe even did go to Hell for a little while, but learned their lesson there, took their punishment, were sorry for their sins, and so were then mercifully let out of Hell to go and live on the wonderful New Earth.

ON THIS BEAUTIFUL NEW EARTH, THE BIBLE SAYS “THERE WILL BE NO MORE SEA”! (Rev.21:1) Today most of the Earth’s surface is covered by water.–So when God remakes the Earth’s surface and the seas are all dried up, there will be at least four to five times as much land for all of the people to live on and farm and enjoy!

GOD TOOK ME ON A SPIRIT TRIP ONE TIME TO THE HEAVENLY CITY and I WAS ABLE TO LOOK OUT THROUGH ITS CLEAR-AS-GLASS GOLDEN SIDES ONTO THE NEW EARTH BELOW, and it was just gorgeous!–Like some of the most beautiful places on Earth today!–No more sea, but rivers and lakes and streams and rolling hills and forests and fields and farms and cottages and little villages.–No more big cities, except the Big City, the Heavenly City!

JUST THINK!–A WHOLE NEW EARTH, A WHOLE NEW CREATION!–With peaceful and friendly animals and birds and all the beautiful creations of God that are with us now. But there will be none of the harmful insects and pests and thorns and thistles, etc. The whole Creation will be just like God had planned for it to be in the beginning, like it was in the Garden of Eden!

WHAT A WONDERFUL WORLD IT WILL BE!–With no more sin, war, destruction, death, sickness, tears or pain!–And no more speeding cars that cause so much death and destruction, no more smoke to pollute the air, no more destructive factories or weapons–none of these things! Everything will be just Heavenly, beautiful and natural, the way it was when God first created the Earth!

WE DON’T KNOW EXACTLY WHAT KIND OF BODIES THOSE PEOPLE LIVING OUTSIDE THE CITY ARE GOING TO HAVE, but we do know that they’re not going to be as supernatural or powerful as the Heavenly resurrection bodies of the saints. The bodies of those who live in the City will be as powerful and miraculous as the angels’, just like Jesus’ body after He was resurrected!

THE PEOPLE OUTSIDE ON THE NEW EARTH WILL HAVE SOME KIND OF NEW RESURRECTION BODIES, but I think they will be a little more like the bodies that we have now than the powerful bodies that the saints will have then. When I saw the New Earth I remember seeing farms, so they must grow food, which means they must have some of the same natural needs that we have now. I also saw cottages, houses and villages, so they must still need shelter, and I suppose they will also wear some kind of clothing.

THE PEOPLE LIVING ON THE NEW EARTH OUTSIDE THE HEAVENLY CITY MIGHT BE JUST AS NATURAL AS ADAM and EVE WERE! They will be learning about the Lord and His Love and will be receiving healing and teaching from the Heavenly saints who will be helping them. Maybe, if they really fully receive the Lord, they too will someday be allowed inside the City!–We’ll find out when we get there!

THE NEW EARTH WILL BE SO WONDERFUL THAT LIFE WILL BE JUST HEAVENLY FOR EVERYBODY!–And even though the unsaved people outside on the New Earth won’t be able to live in the Golden City, maybe they can visit it, and they will still have a happy and beautiful life!

BUT WHY WOULD ANYONE WANT TO LIVE OUTSIDE ON THE NEW EARTH WHEN THEY COULD LIVE INSIDE THE GREAT HEAVENLY CITY ITSELF? To be able to live inside the Heavenly City, all you have to do is receive Jesus into your heart here and now!–Then that great, wonderful, gigantic Golden City will be your town, your Home, and you’ll be able to walk its streets and enjoy its beauties and thrill to its pleasures forever!

RECEIVE JESUS AS YOUR SAVIOUR BY PRAYING THIS SIMPLE PRAYER:

“Lord Jesus, please forgive me for all my sins. I believe You are the Son of God and that You died for me. I now open the door of my heart and I ask You, Jesus, to please come in and give me Your free gift of Your Holy Spirit and eternal life. Help me to love You and to love others by telling them about You and Your Love. In Jesus’ name I pray. Amen.”