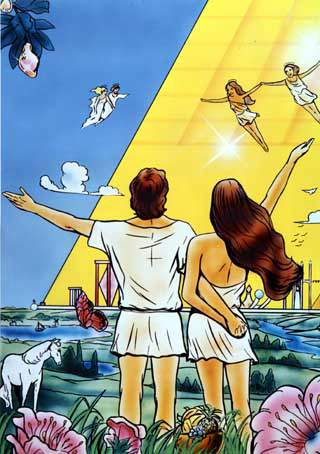 ROBERT and SUNNY ARE ABOUT TO HAVE A DELICIOUS PICNIC with two of their closest friends from the gigantic Golden City! Like all of the people who live inside of this great Golden Mountain, their friends, Peter and Angela, can fly! Here we see them flying down to meet Robert and Sunny, who are throwing open their arms, greeting and welcoming them!

THIS GIANT GOLDEN MOUNTAIN CITY IS SO BIG that Robert and Sunny can only see just a small part of it from where they’re now standing! It’s like when you’re in a car driving towards a really big mountain, at first the whole mountain seems like it’s pretty close.–But as you get closer and closer to it, it seems like it gets bigger and bigger, and usually takes longer to reach than you first thought it would!

WELL, THIS MOUNTAIN IS MUCH MUCH TALLER THAN ANY MOUNTAIN ON EARTH!–It’s 275 times taller than the tallest mountain in the World, Mt. Everest! And this Golden Mountain City is just as wide and just as long as it is high!–1,500 miles!–So it can be seen even from thousands of miles away by the people who live outside of it!

ALTHOUGH ROBERT and SUNNY ARE NOT CITIZENS OF THE GOLDEN CITY and therefore have never been inside of it, the pretty little cottage that they live in is only a few miles away from it! At night time they love to relax on their porch and look up the giant glowing Mountain before them, up past the clouds and into the starry sky where its golden peak reaches far into Space! They never need any candles or lamps in their cottage because the light from the City never goes out and lights up the Earth all around it with a beautiful warm golden glow!

BECAUSE THE CITY IS MADE OUT OF A BEAUTIFUL CLEAR-AS-GLASS KIND OF CRYSTAL-GOLD, they can see through its walls! Whenever they spend time with their flying friends from the City, Robert and Sunny love to ask questions about the different buildings and amazing sights of the corner of the Pyramid that they can see, and learn all they can about them.–Of course, being 1,500 miles long, the City goes much further than the few miles that Robert and Sunny can look into it, so Peter and Angela always have a lot to tell them about many of its wonders that they can only imagine!

FOR THEIR PICNIC THEY WILL BE HAVING SOME DELICIOUS FRESH FRUIT that Robert and Sunny have just picked from their garden. No one ever goes shopping with money to buy jars, cans, packages or boxes of food from shops and stores any more, but everyone simply picks and eats fresh fruits and vegetables! The insect pests that used to eat and destroy much of man’s crops are all gone now, so it’s much easier to be a successful gardener or farmer!

THE WEATHER IS ALWAYS NICE and WARM, SUNNY and BRIGHT, NO MORE RAIN STORMS, and the ground is ideal for growing food! All weeds and thistles that harm and choke the good food-plants no longer grow at all!–Nor do any thorns or sticker-bushes!–Which is why Robert and Sunny were able to walk to their favourite picnic spot today bare-footed! The soft green grass that carpets the Earth is perfectly safe to walk on, lie in and play in, so they don’t even need a blanket to sit on!

WHILE ENJOYING THEIR LOVELY PICNIC THEY DON’T HAVE TO WORRY ABOUT ANTS, FLIES OR MOSQUITOES EITHER!–Such pests don’t even exist any more! But there are some groups of hungry lions and tigers that often roam around this area. For this reason, Robert came prepared!–He brought along some extra bananas, which he found out last time the lions especially enjoy, as a nice change from their regular diet of grass and straw! Robert knows this because the big old papa lion told him so!

ALL OF THE ANIMALS and BEASTS ARE TAME and GENTLE NOW!–The friends of man and pets of his children! Neither man nor beast eat meat any more, and all of the different kinds of animals eat and play and rest together in beautiful peace and harmony!–And the animals are able to talk and communicate with man and each other–just like they used to when the World was first created!

THIS BEAUTIFUL and HAPPY WORLD THAT ROBERT and SUNNY LIVE IN IS KNOWN AS THE “NEW EARTH”!–And the gigantic Golden Mountain is the “Heavenly City”! This great Heavenly City is already made by God and is floating through Space towards the Earth right now! It is described in the last two chapters of the Bible and is the place that most people are talking about when they speak of “Heaven”!–But most people don’t realise that we are not going to Heaven, Heaven is coming to us!

BUT BEFORE GOD’S GREAT HEAVENLY CITY LANDS, He is going to burn up the entire surface of the Earth and its pollutions, melting all of the mountains and drying up all of the seas, making five times as much beautiful land for people to live on! Then He will re-create it all into a beautiful heavenly Paradise, just like the original Garden of Eden!

GOD TOOK THE APOSTLE JOHN ON A SPIRIT TRIP INTO THE FUTURE and gave him a vision of this great 1,500-mile high, long and wide Golden City coming down from Space to the Earth. He wrote: “I saw a New Earth, for the first Earth was passed away; and there was no more sea! And I saw the Heavenly City, New Jerusalem, coming down from God out of Space!–And I heard a great voice saying, ‘Behold, the City of God is with men!'” (Rev.21:1-3)

INSIDE THE GREAT SPACE CITY IS WHERE ALL OF GOD’S SAVED CHILDREN WILL LIVE WITH HIM FOREVER! They will all have powerful new resurrected super-bodies which they will receive very soon when Jesus Christ returns to stop Man from destroying the World and killing himself! In their new super-bodies, God’s people will be able to fly just like Jesus did in His, and like Peter and Angela are in this picture! (Luk.24:31,51)

OUTSIDE THE CITY THE BIBLE SAYS THERE WILL BE WHOLE NATIONS of other people who have also been raised from the dead and have been allowed to live on the beautiful New Earth. (Rev.21:24-26; 22:2) They don’t get to live in the City yet, the Home of the Saved, because they didn’t receive God’s Son, Jesus, in this life because they never heard or fully understood how to. But on the New Earth they will all learn to know and love Him at last!

JUST THINK!–IT WILL BE A WHOLE NEW EARTH, A WHOLE NEW CREATION!–With no more sin, war, destruction, tears, pain or death!–And no more of man’s speeding and polluting cars, destructive factories, industries, weapons of war or filthy, stinking, dangerous cities! Everything will be just beautiful and natural, the way it was when God first created the Earth in the lovely Garden of Eden!–Heavenly!

THE NEW EARTH WILL BE SO WONDERFUL THAT LIFE WILL BE JUST HEAVENLY FOR EVERYBODY!–But why would you want to be delayed outside on the New Earth when you could be a saved Saint who gets to live inside of God’s Heavenly Space City in a super-body that can fly and enjoy all of the Heavenly wonders and pleasures of God!–Both inside of His Heavenly City and outside on the New Earth!–And even on other Worlds throughout the Universe?!

TO BECOME A SAVED CITIZEN OF GOD’S HEAVENLY CITY, ALL YOU HAVE TO DO IS RECEIVE HIS SON, JESUS, into your heart here and now by simply praying this little prayer: “Dear Jesus, I believe that You are the Son of God and that You died for me. Please forgive me for all my sins. I now open the door of my heart and I ask You, dear Jesus, to please come in and give me Your free Gift of Eternal Life! Help me to love You and to love others by telling them about You and Your Love.–In Jesus’ name I pray. Amen.”

GOD BLESS YOU WITH HIS LOVE HERE and NOW and A WONDERFUL LIFE WITH HIM FOREVER IN THAT BEAUTIFUL HEAVENLY CITY!