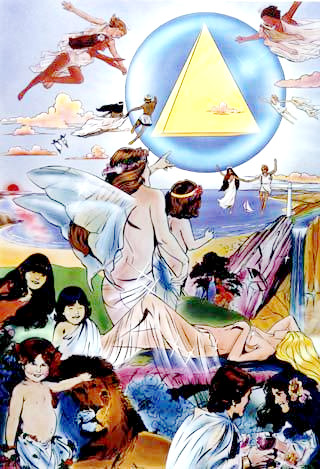 THIS HUGE GOLDEN PYRAMID IN THE SKY IS THE BIGGEST SLICE OF PIE YOU’LL EVER SEE! And though it’s shaped a little bit like a piece of pie, it’s not just a slice, it’s the whole thing! In fact, it’s not really an imaginary “pie in the sky” at all!–It’s real! It’s an actual space vehicle that is already built and on its way to Earth right now!

THIS AMAZING HEAVENLY BODY WILL SOON ARRIVE and WILL ACTUALLY FLOAT ABOVE THE EARTH! Shortly after its arrival, literally billions of spacemen will come flying out of it, following their all-powerful King down to our Planet to crush and defeat the armies of Earth who resist them! All of man’s combined military might and modern weapons will not be able to stop this invasion!

THESE INDESTRUCTIBLE INVADERS WILL USE THEIR SUPER-HUMAN POWERS TO CONQUER ALL OPPOSITION, and will take over the entire World, forever ending man’s rule on Earth as we now know it! They will then set up their own government, ruling over the millions, or even billions, of people on Earth who will survive the change-over.

LIKE A GIANT SPACE STATION, THE GOLDEN PYRAMID WILL HANG IN THE SKY while the Earth turns beneath it! It will serve as the Headquarters or “Mothership” of the invaders, who will fly back and forth from this base in space to the planet Earth below.

–THIS AMAZING LOOK INTO THE FUTURE IS NOT TAKEN FROM A SCIENCE FICTION MOVIE OR BOOK, but from the Bible! For the Bible predicts that within the next few years, man’s destructive rule on Earth will suddenly end when Jesus Christ Himself returns “in the clouds of Heaven with power and great glory”! (Mt.24:29-31) He will supernaturally gather together all of His saved children, instantly giving them powerful new resurrection super-bodies that will rise up from the Earth to meet Him in the air! (1Thes.4:16,17)

HE WILL THEN TAKE US ALL TO THIS HEAVENLY CITY forthe most wonderful Party ever held, our Victory Celebration over all the forces of evil that we will have left behind on the Earth! (Rev.19:6-9) The Bible says that this beautiful pyramid-shaped crystal-gold Space City is a gigantic 1500 miles long, wide and high, prepared by Jesus Himself to house all of His billions of children who have ever lived! It is now floating through Space towards the Earth in a gigantic sphere called the Crystal Sea! (Rev.21:1-3,16)

AFTER OUR CELEBRATION OF VICTORY IN SPACE CITY, ALL OF GOD’S CHILDREN WILL RETURN TO EARTH on powerful Heavenly horses, with Jesus Himself leading us! We’ll come flying out of the sky, invading the Earth to conquer and destroy all the evil kingdoms of man, whose armies will be assembled in Israel. A great final battle will be fought there, known as the “Battle of Armageddon”. (Rev.19:11-21)

THEN THE LORD and HIS RESURRECTED CHILDREN WILL REORGANISE THE EARTH, RULING IN LOVE OVER ALL OF THE NATURAL PEOPLE on Earth. A wonderful new World will be built as the Kingdom of God is set up, and Jesus Christ will reign from shore to shore as King of Kings over the entire Earth! (Rev.20:4)

THE BIBLE SAYS THAT THIS PERIOD WILL LAST FOR 1,000 YEARS, and is therefore known as the Millennium. The Curse that came upon the Earth when man fell into sin will be removed and the Earth will be restored to the original beauty of the Garden of Eden! –At last man will live in beauty and plenty and peace, like God planned for Him to live in the very beginning!

THE “LION WILL LIE DOWN WITH THE LAMB and the leopard with the baby goat, and a little child shall lead them!” (Isa.11:6,7) Man and beast will no longer eat meat, and all of creation will be at peace and harmony with itself! Like the little girl in our picture, small children will be able to lead and play with lions and tigers as pets!

THE GREAT SPACE CITY WILL NOT ACTUALLY LAND ON THE EARTH UNTIL THIS 1,000-YEAR PERIOD IS OVER, but it will be nearby, close enough that we’ll be able to see it hanging there in the sky! It will be the Heavenly Headquarters for all of God’s resurrected children, who will be busy teaching and training the natural people of the Earth to love the Lord, know His Word and follow His loving ways.

ALL OF THOSE HEAVENLY FLYERS IN THIS PICTURE ARE GOD’S RESURRECTED CHILDREN. In our new super-bodies, we’ll be able to fly and even travel with the speed of thought, as Jesus did in His new resurrection body. (Lk.24:31,51) No doubt we’ll be able to shoot back and forth from our work here on Earth to our Heavenly Headquarters for relaxation, refreshing and inspiration!

JUST IMAGINE HOW BEAUTIFUL THAT GREAT SPACE CITY WILL LOOK FLOATING THERE IN THE SKY! It will probably remain in one place, with the Earth revolving underneath it, so that everyone will be able to see it every time the Earth turns! It would rise and set on the horizon much like the sun and the moon do now. Think how beautiful it would look in the night sky, lighting the Earth below with its beautiful soft golden glow!–Absolutely gorgeous!

ARE YOU ONE OF THE SAVED WHO WILL RISE FROM THE EARTH TO MEET JESUS WHEN HE RETURNS SOON?–To rule and reign with Him as one of His resurrected supermen or superwomen during this wonderful 1,000 years? Will you be able to fly up and enjoy this wonderful Heavenly City? If you’re not sure, you can be sure by opening your heart and receiving Jesus right now!

THEN YOU’LL KNOW THAT HEAVEN IS NOT JUST A DISTANT “PIE IN THE SKY” for some far-away future!–You can have a piece of God’s Heavenly Pie right here and now! Jesus gives us His Heavenly Love, joy and peace in our hearts and lives right now!–A real taste of Heaven to come!–The best, most delicious Pie you’ll ever find!

WANT SOME?–“TASTE and SEE THAT THE LORD IS GOOD!” (Ps.34:8) Simply pray this little prayer: “Lord Jesus, I believe that You are the Son of God and that You died for me. Please forgive me for all my sins. I now open the door of my heart and ask You, Jesus, to please come in and give me Your free Gift of Eternal Heavenly Life! In Jesus’ name I pray. Amen.”