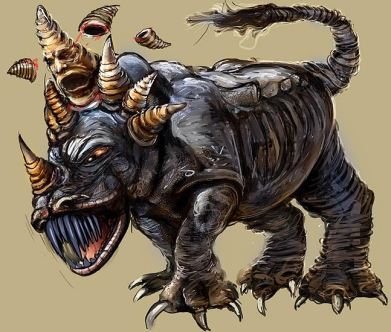 Points I would like to bring out in this article which I believe are supported by both Holy Scripture and history:

"This beast with the "great iron teeth" corresponds to the legs of iron in the Daniel 2 image and is, of course, Rome. this great and terrible beast of force and power "devoured and brake in pieces" all the known, civilized world of its day. And yet so magnificent was the Roman concept of law, so noble their ideas and ideals, so learned their language and literature, that they were to influence all cultures and civilizations to come. This truly diverse beast literally "stamped the residue" of civilizations with the imprint of its culture!

The 10 horns are the final 10 kingdoms which evolve out of, or from the breakup of the Roman Empire, and are just the same as the 10 toes of the image." -- David Brandt Berg

Daniel 7:22 makes it crystal clear that the Fourth Kingdom continues, "Until the Ancient of days came, and judgment was given to the saints of the most High; and the time came that the saints possessed the kingdom". In other words, the Fourth Kingdom continues to the very end until the coming of Jesus Christ to rule on earth. And we know from history that though the Roman Empire seemed to die with the invasion of the barbarians from Germany, it again revived and became the "Holy Roman Empire" under the Popes. Could the revival of the Roman empire under the Popes be one interpretation of "his deadly wound was healed" of Revelation 13?

Rome lost most of its temporal power when Pope Pius VI was attacked and confined in 1798. I believe this to be the "deadly wound" of Revelation 13:3.

In 1796, French Republican troops under the command of Napoleon Bonaparte invaded Italy, defeated the papal troops and occupied Ancona and Loreto.

Pope Pius VI sued for peace, which was granted at Tolentino on February 19, 1797; but on December 28 of that year, in a riot blamed by Papal forces on Italian and French revolutionaries, the popular brigadier-general Mathurin-Léonard Duphot, who had gone to Rome with Joseph Bonaparte as part of the French embassy, was killed and a new pretext was furnished for invasion. General Berthier marched to Rome, entered it unopposed on February 10, 1798, and, proclaiming a Roman Republic, demanded of the Pope the renunciation of his temporal power.

Do you think it is outside of the realm of possibility that the Popes and Rome have slowly and covertly regained that temporal power since then? They had over 200 years to do it! If the Vatican did indeed regain its temporal power over the world, wouldn't it be yet another fulfillment of the prophecy "his deadly wound was healed"? I believe it is.

Revelation 13:3  And I saw one of his heads as it were wounded to death; and his deadly wound was healed: and all the world wondered after the beast.

Is Revelation 13:3 a prophecy waiting to be fulfilled in the still unknown future? I believe it was fulfilled in 1929 by the Lateran Treaty that Mussolini made with the Pope!

The Lateran Treaty (Italian: Patti Lateranensi; Latin: Pacta Lateranensia) was one of the Lateran Treaty of 1929 or Lateran Accords, agreements made in 1929 between the Kingdom of Italy and the Holy See, settling the "Roman Question". They are named after the Lateran Palace, where they were signed on 11 February 1929. The Italian parliament ratified them on 7 June 1929. It recognized Vatican City as an independent state, with the Italian government, at the time led by Benito Mussolini as prime minister, agreeing to give the Roman Catholic Church financial compensation for the loss of the Papal States.[1] In 1947, the Lateran Treaty was recognized in the Constitution of Italy[2] as regulating the relations between the state and the Catholic Church. (Ref: https://en.wikipedia.org/wiki/Lateran_Treaty)

The deadly wound which resulted in the loss of papal authority was healed in 1929. You may debate that but for me it's as clear as a bell.

Several people have told me, "not Rome!" even though Daniel 7 and other Scriptures makes it clear that the 4th and final kingdom of man continues to the very second coming of Jesus. If the Fourth Kingdom is Rome and the Fourth Kingdom continues to the very end until Jesus returns to take over and rule the earth, the Fourth Kingdom must be ruling the world today! So the only question that remains is, what represents the Fourth Kingdom today? I believe it's still Rome, the Vatican, that is ruling the world covertly. Though most contemporary Christian leaders would not agree with that, all the Protestant reformers of the 16th and 17th centuries did. I can prove that from their writings. What I am trying to teach is no different that what the Protestant reformers already thought about the Roman Catholic church. You can read their books on my James Japan website.