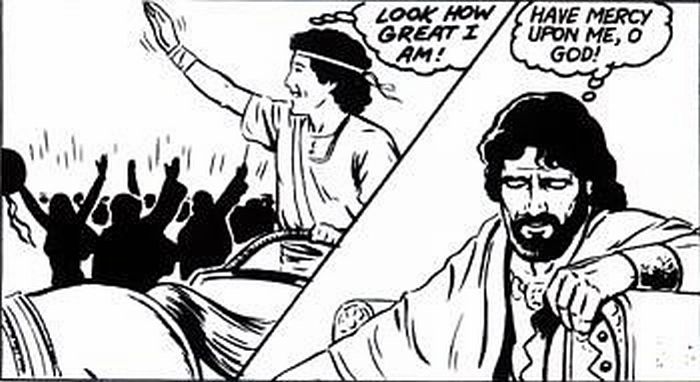 If we don't have His righteousness, we have nothing!

Those who are so proud of their own success and their own righteousness, who "thank God that they are not as other men" (Lk.18:11), they tend to look down on others, and have no mercy, no compassion, no sympathy! But in God's sight, such self-righteous pride is the worst sin of all! (Isa.64:6)

Pride comes before a fall, and some people have to really go through a lot before they get humbled. (Pro.16:18)--Like King David! He probably had a lot of spiritual pride that had to be humbled, because look what a great hero he was to begin with! Even as a little boy he fought and killed a lion and a bear to protect his father's sheep. Then he killed Goliath, the giant, and all Israel knew what a great hero he was! (1Sam.17:34-37,49; 18:6,7) But apparently he became lifted up in pride, and thereby fell into great sin. Worst of all, he became a self-righteous sinner because he covered it up and pretended to be so righteous! Finally the judgements of God fell and he lost everything! (2Sam.11,12) But look what a marvellous change occurred in him when the Lord really humbled his spiritual pride!

Lord, help us to remember we haven't got anybody's righteousness except yours, and you're the only One Who can give it to us! (Phi.3:9)