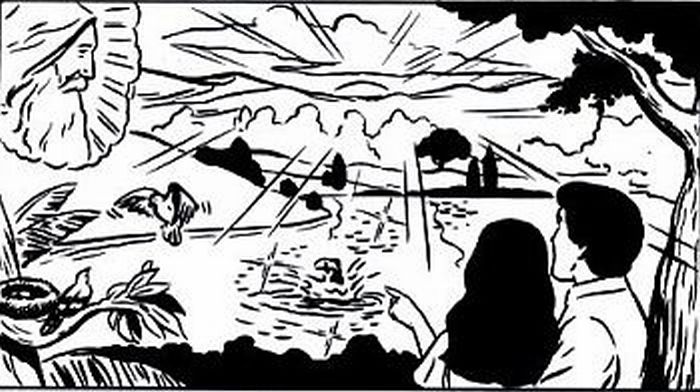 If you really haven't got enough sense to believe in God, then you can just look at His Creation and know that there is a God! Just logically and reasonably, anybody in their right mind should know there's a God! Anybody who really believes that it all happened by accident is a fool! It's ridiculous! All you have to do is sit outside and look at the trees and the birds, and you'll know that it wasn't an accident.--Too much planning went into it all. God's entire glorious Creation is a constant testimony of the existence of a Divine Designer and Creator.

Although the whole Creation testifies of the existence of the invisible God, many people today refuse to receive the testimony, because they choose to be ignorant!--Thus they've cooked up the ridiculous, idiotic scheme of evolution!--To try to get rid of God and the knowledge of God, "as they did not like to retain God in their education". (Rom.1:28)--They don't want to confess that He exists.

But we marvel at the work of God's hands, and we see Him in His handiwork, and, as His Word says, we understand Him by the things that are made, so that we know God, and glorify Him as God, and are thankful! (Romans 1:20)