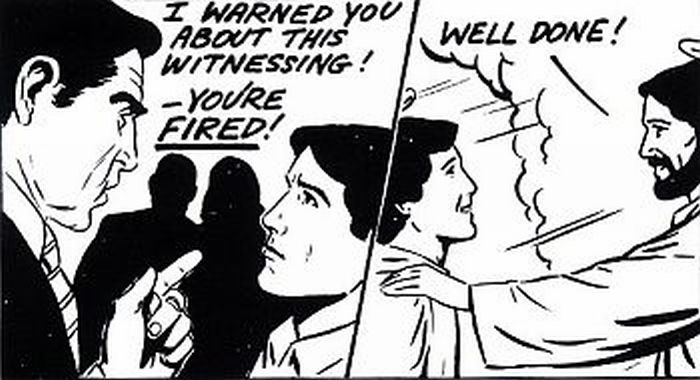 It's a sacrifice to witness!

Editor's note: "To witness" in this case means to share your faith in Jesus Christ with others. A witness is a person who simply tells what he or she has seen and heard. You may or may not consider it a "sacrifice" to share your faith depending on your situation. I personally think telling others about the Lord one of the most exciting and enjoyable things I can ever do in life!

Like the lady said when she was told she needed to go out witnessing, "Oh, this just kills me!" Well, that's exactly what it should do!--It should kill your pride, your self, your selfishness, your egotism, and may even cause some considerable physical sacrifice and strain. (See John 12:24,25.)

Sometimes it's actually dangerous to witness!--You're liable to get some persecution. But we still have to do it! All the early Apostles died as martyrs, as well as a good many of the early Christians, but they continued to be faithful witnesses just the same! But when the church left the arena and started sitting in the grandstands in order to avoid death by braving the lions, she died of old age in the stands!--It's better to die as a witness in the jaws of the lions than of old age in the grandstand! Jesus Himself promised that if you would suffer with Him you should also reign with Him! (2Tim.2:12) So are you going to reign now a little while and suffer a lot later?--Or are you going to suffer a little now and reign forever?

"They that be wise shall shine as the brightness of the firmament; and they that turn many to righteousness as the stars for ever and ever!" (Dan.12:3)