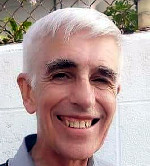 My name is James Arendt. I am a U.S. American, born in Hammond Indiana and raised in Chicago, Illinois in the southeast side neighborhood of Hegewisch. I currently live on the Pacific island of Guam, one of the territories of the USA.

I was raised a Roman Catholic but converted to a biblical Protestant born again faith in Jesus Christ in 1971, one year after enlisting in the USAF. In 1972 the Air Force sent me to Japan to a military installation just north of Tokyo. During the 18 months I served in the Air Force in Japan, I fell in love with the country and its people and culture. In the Fall of 1973 I was presented an opportunity to continue to live in Japan after my discharge from Air Force by becoming part of God's army -- becoming a missionary for Jesus Christ! I did that by joining a missionary movement called the Children of God and now is known as The Family International (TFI). In all as a missionary for Christ, I lived 40 years in Japan, 3 and a half years in Russia, and spent weeks in Finland, Poland, Estonia, Lativa, and China serving my King of kings, the Lord Jesus Christ.

Deep Truths largely consists of my favorite articles by David Brandt Berg. I think they are good for the world and all Christians in general. They helped me understand the Bible in a deeper way. Moreover, I would not have become missionary in Japan and other countries except for Pastor David's influence in my life.

Most of the articles on Deep Truths were written from 1969 to the early '80s. They are also known as "Mo Letters" because David's nickname in the early days was Moses David or Mo for short, and his writings were letters to the disciples of Jesus in The Children of God, later known as "The Family" and now "The Family International." David graduated from this earthly realm to the Heavenly one to be with Jesus his Savior in 1994.

Please understand that David Berg used ALL CAPS when writing the first sentence of his articles as his style of writing. He wrote the articles before the Internet was even an idea in the minds of the public. When David wrote in ALL CAPS, he did not mean yelling or shouting as people who chat on-line take it to mean today. On some articles I edited the first line to lower case, but it is just too much work to do them all.

From January 2017, I began to post my own material which are not from the Family International or necessarily based on the teachings of David Berg. Some actually contradict them! This is especially true for David's teachings about Matthew 24 (and comparable chapters in Mark and Luke), Daniel 9:27 and prophecies in the Book of Revelation. From December 2014 I adopted the historicist school of interpretation of Scripture which means many prophecies in Daniel, the Gospels and Revelation have already been fulfilled in history. David Berg, sad to say, taught from the futurist school of interpretation which was based on John Nelson Darby and promoted further by C.I. Scolfield -- a man David Berg didn't even like! So I hope you see, I have been open to change as God has shown me truth. But I will not throw the baby out with the bath water and say that everything else David taught is also false as some have done. I would not been an evangelist in the atheistic nation of Japan it weren't for David Berg's influence on my life. Moreover, if it weren't for David Berg. I would probably be embracing the false doctrines that evangelicals hold today such as support of the State of Israel which I believe is part of an Endtime deception of the body of Christ. For more about that, please see my Endtime Deceptions Exposed page.

I want to promote Jesus Christ and His Truth and Salvation on this web site. Please also see my James Japan blog.

You are welcome to email me and ask me questions, but before you do, please check out my email policy statement.