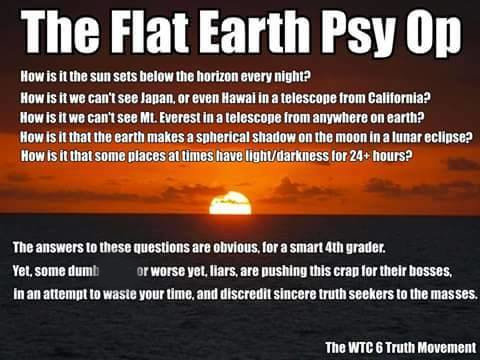 From sometime in 2015, I was surprised to learn that some people still believe the earth is flat, and not of a spherical shape! Since then, Flat Earth Theory has been gaining momentum and popularity on YouTube, Facebook and other social media! Just enter in Google "flat earth theory" and you will get over 10 million hits!

I believe the Flat Earth idea could be a trick of the NWO (New World Order) people to confuse and mislead those who study conspiracies. Is conspiracy study a contemporary phenomenon? It is not! History tells us that conspiracies against the general population to enrich the ruling elite have existed from time immemorial.

Is everything NASA is telling us a lie? Some people think that because NASA says so, it must be a lie! They distrust everything NASA has to say, and with good reasons. One of those reasons is doubt whether NASA really did put a man on the moon. I am of that opinion that there are very good reasons to question it. But in this case I do not think we should take NASA as the final authority on the subject. Did NASA put the first man in space? No, the Soviet Union did! Did the concept of a spiracle earth originate from the NASA? No! A spherical earth has been postulated from the time of Aristotle who lived from 384 – 322 BC)! Moreover, there is NO scientist of any reputation whatsoever who has held a Flat Earth hypothesis. And there is no Christian leader I respect who teaches the earth is flat.

One reason for the Flat Earth Youtube phenomenon could be that the NWO people want to group climate change deniers in the same category as the flat earth people. You can include Moon Walk deniers with that as well. This is diabolical! Climate change deniers have reputable scientists such as John G. Hartnett on their side, but flat earth theory people have absolutely none.

One of my friends suggested that Flat Earth may be a conspiracy from NASA itself! All of the Flat Earthers are people who believe the Moon Walk was a hoax. Because those who believe in a flat earth appear to be fools in the sight of the rest of the world, nobody will listen to them about other conspiracies even though they may be true. Could therefore Flat Earth be a conspiracy against those who believe the Moon Walk hoax conspiracy? Or any of the other popular conspiracies such as who killed JFK, 911, NWO exposes, etc.? Is there such a thing as a conspiracy against those who believe in conspiracies? It sure seems so to me! The YouTubes that promote Flat Earth sound good and reasonable. The ideas came from intelligent minds in order to mislead and confuse. In other words, the modern creators of Flat Earth Theory may be highly intelligent people who were paid to lie! And sadly so far, three dear friends of mine have bought it. It really makes me mad!!!

This young man in the Youtube explains the Flat Earth Theory phenomenon quite well and eloquently.

I want to present something that the video does not cover. If the earth is indeed flat, we should be able to see land across an ocean with a powerful telescope. We can't. We should be able to see land of the opposite coast of Lake Michigan while standing at Navy Pier in Chicago. We can't. Land 48 miles away is barely visible from the top observatory of the Willis Tower in Chicago, and this distance is only half of the average width of Lake Michigan, the distance from Illinois and Wisconsin to the State of Michigan on Lake Michigan's eastern shore.

The picture below shows Lake Michigan and the city of Chicago on its southern western shore. This picture shows the approximate distance from the Chicago Loop (the city center) to the eastern shore of the state of Michigan which is about 48 miles or 76.8 kilometers. I used Google Earth on my PC to measure this distance. Let's say I was standing on Lake Shore Drive, the road in Chicago that runs parallel with Lake Michigan. My eye height above the surface of Lake Michigan is at least 20 feet. That would make the Michigan shoreline 1205 feet below the horizon which is 5.5 miles away.

Now let's say I went to the top observatory deck of the tallest building in Chicago, the Willis Tower (formerly called the Sears Tower), which is approximately 1400 feet from my eye height to the surface of Lake Michigan. The eastern shore can be seen, but not much. The photo below was taken from the approximate height of the sky-deck observatory of the Willis Tower. As you can see, land on the opposite side of Lake Michigan is not visible, only a water horizon can be seen. I have heard that from the observatory deck of the Willis Tower, the coast of Michigan is indeed visible, but not very much of it. More of it can be seen from a higher altitude. This proves curvature of the earth. Even if someone says the math in this article is incorrect, the plain fact is the higher you go, the further away the horizon gets. This proves curvature of the earth. I don't need NASA or a school text book to tell me this. I have validated it from my own experience when looking out a window of an airplane.

Will this help change the minds of flat earth theorists? I don't know. One of my friends remains unconvinced. He cannot explain in his own words satisfactorily to me why I cannot see the Michigan shoreline from Chicago. He said weather or visibility has something to do with it. But the photo of from height of the Willis Tower looking across Lake Michigan shows a clear sky. He is in denial! There is only one thing he can do: Throw YouTubes at me made by unknown people with no credentials. I saw a couple of those YouTubes and they are filled with nothing but specious arguments!

Noun: an argument that appears good at first view but is really fallacious

I learned it's easy to fool people, but a magnitude harder to convince them that they have been fooled. I flew around the earth once going west and I wound up back to where I started. It only took me 20 years to do it. :-)

I'm using Chicago and Lake Michigan as an example because I was raised in Chicago and have been to Lake Michigan countless times. It's 87 times larger than the largest lake in Japan, Lake Biwa. The opposite shore of lake Biwa is clearly visible. I often tell the Japanese that Lake Michigan looks like an ocean.

Here's a view of Lake Michigan from a satellite: Standing on one of those sand dunes 100 feet above the surface of Lake Michigan would put the horizon 12 miles away and this would hide the bottom 187 feet of those buildings. This proves curvature of not only the earth, but of Lake Michigan itself!

When I flew from Chicago to Japan, the pilot flew northwest which took me over Canada, Alaska, and the eastern part of Russia. The spherical model of the earth shows me that going northwest is the shortest route!

This is only 3 minutes, 22 seconds and fun to watch!

One of my friends told me that all science is bunk and you cannot trust any of it! If that were true there would be no modern technology today. You certainly wouldn't be reading this article from your PC, Tablet or phone.

Another point: Curvature of the earth was proven over 500 years ago in 1492 when Columbus sailed the ocean blue. And Ferdinand Magellan's expedition circumvented the earth from 1519 to 1522. So to say we get the idea of a global earth from NASA is to ignore history.

Folks, those who say the earth is flat are either lying or totally deceived.

Also see how Flat Earth Societies are linked to Freemasonry!

It is YOU who are insulting ME by a FALSE accusation! Repent!

Steven Arele (US) says...
The dumb-sh* curse word to which Marie referred is in the next-to-last line in the very first image on the page of the article linked below: https://deeptruths.com/articles/flat-earth-trashed.html
Admin:
Thank you! I edited the offensive word out. I honestly didn't notice it when I posted the article.