Death in Your Arms! 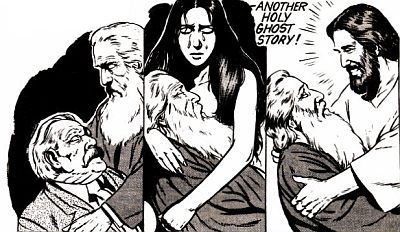 I want to tell you about the Sunday morning that a man died in my arms, I was sitting in Cafe de Paris in Puerto when this great big tall fine-looking man, a giant of a man, big, robust, walked into the cafe with his family.

He looked like he was in his 70s, quite an old fella, but he looked fine, robust, healthy, but walked with a cane. He sat there in that chair looking around majestically, a big strong fellow. I looked down at his foot and it was all bandaged up.

So I looked at that poor old fellow and I said, "You know, we ought to pray the Lord will heal him and help him and really deliver him from his aches and pains and whatever trouble he's got. We ought to pray for real deliverance for that fellow!" And I hardly got the words out of my mouth and the prayer off my heart when the Lord delivered him!--Not the way I was expecting it, but the Lord delivered him!

I was watching the very moment when he fell over and I rushed forward and took him in my arms, I quickly held him so he wouldn't slip and fall on the floor and I began to pray for him, as I thought maybe if he heard somebody praying it might encourage him. I've often prayed with people in accidents who were dying, and it sometimes encourages them to know that somebody is praying for them.

I didn't realise that he was dying in my arms, but immediately this British doctor rushed over and we knelt down beside him, the doctor and I. I was still holding one hand doing whatever the doctor told me to do, and he was massaging his heart. He shook his head--no pulse, no breath, no nothing!--And the doctor pronounced him dead.

Oh, I forgot to tell you one of the best parts! Suddenly as I was sitting there after they had removed his body. I saw his face smiling at me! I was just telling someone what had happened, when there he was, his face just below pavement level out in the street, as though his spirit was just leaving and wanted to tell me goodbye and thank me!

All I saw was just like an oval portrait, just his head only, and he was looking straight at me and he nodded his head and smiled like, "Thank you!" It was so sweet, and that was really the payoff!

Just because they've got a spiritual body now doesn't mean they're not human. You're going to have a lot of the same characteristics.--It's still going to be you. You're even going to look a lot the same, only better, only better!

So it's a beautiful place to be, full of beautiful people having a beautiful time, and trying to help you all they can with their prayers and with all the help they can, thank the Lord? Do you believe it? It's the truth!

But I was really amazed at how few people even pay any attention to things like that, how few people are even concerned about death! Here they were face to face with death; something that is going to happen to every one of them sooner or later, and most of them are not prepared for it, have made no preparation whatsoever.

Are you ready to die? Have you made preparations for the journey into death? Have you received Jesus Christ as your Saviour? Are you saved? If not, receive Him now!

Copyright © 1998 by The Family International
Request