The Ark of the Covenant

Excerpts from "THE EASTER STORY!" a Bible class from David Brandt Berg with his pupils -6 April 1980 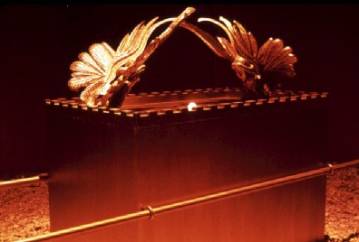 ALL RIGHT NOW LET'S PROCEED WITH THIS PASSAGE IN THE 27th CHAPTER: "He cried with a loud voice, yielded up the ghost, and, behold, the veil of the temple was rent in twain from the top to the bottom; and the earth did quake, and the rocks rent; and the graves were opened."--This was quite a momentous event! "And many bodies of the saints which slept arose and came out of the graves"--when? (Answer: "After His resurrection.") 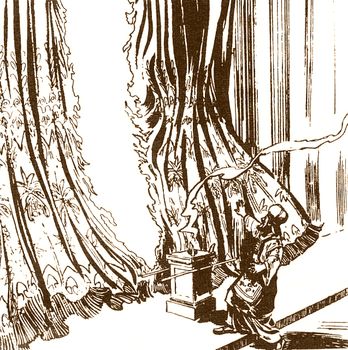 THE ARK SYMBOLISED WHAT? The very presence of God in the Temple, right? It doesn't tell you all these things here in the Bible because you're supposed to know a few things, and if you were a Jew in those days you would have known one thing about that veil, as it was called.

NO ONE EVER WENT BEHIND THE VEIL EXCEPT WHEN? The only thing in that Holy of Holies was the Ark of the Covenant, right? What was the Ark like?

As I recall it was supposed to be 2 1/2 cubits long and 1 1/2 cubits wide, which would be about 2 feet wide and 4 feet long. That's about the size of what? It was about the size and shape of a coffin. Only it was a box made of gold-plated wood!

THE ARK WAS A GOLDEN BOX and WHAT DID IT HAVE ON EACH SIDE OF THE BOX, LENGTH WAYS? (Peter: Two cherubs.) Well, on the sides of the box were two long staves or poles--for what purpose? (For carrying.) For carrying. It took two men to carry it. They must have been pretty strong men, it may have even taken four to carry it. Nn the ends of the box were two cherubim, some places they're called seraphim, or golden angels.

THEY WERE THE CLOSEST THING THAT THE JEWS HAD TO ANY KIND OF GRAVEN IMAGES. Now the Lord by the Law had forbidden graven images of anything on the Earth, under the Earth or in the Heavens, but there were these two graven images, one on each end of the box, how about that? There's another example of how God makes the rules, so He can break them if He wants to!

AND IN THIS MOST HOLY OF ALL HOLIES IN THE JEWISH RELIGION, THE ARK OF THE COVENANT which represented the very presence of God, were some of their holiest artifacts, holiest material souvenirs of famous past events--what was in the box? One thing was what? (Jewel: The tables that Moses got.) Yes, and what else? Something to do with Moses' brother. Something that showed his authority. (Aaron's staff.)

AARON'S ROD AS IT'S CALLED, AND IT DID WHAT? (Peter: Is that the one that ate up the snakes?) Yes, but also later on it did what? (Divided the Red Sea.) Yes, but Aaron's staff did something very important when there was a controversy over his authority as to whether he was the right High Priest or not. They had some arguments, these Jews were always causing trouble, and one time they even challenged Moses, "Are we not also prophets?" etc. (Numbers.12:2.)

MIRIAM HIS OWN SISTER LED A REBELLION AGAINST HIM, especially after he married this Ethiopian Black girl, that did it, that was too much integration! Besides the fact that it was about his fourth wife, as I recall. That's not brought out too clear, the church certainly doesn't emphasise it, nor do the Jews, that Moses had about 4 wives and one of them was a Black girl!

IN THE BOX WAS AARON'S ROD THAT BUDDED. Now on some occasion when there was a controversy over whether he was the right High Priest, they had a test to see whose rod would bud, and Aaron's was the only one that budded. Can you imagine? After the stick had been supposedly dead for years and he'd been carrying it around for years, all of a sudden it sprang buds! (Numbers.17:8.)

WHAT DOES THE WORD ARK MEAN? Well, in Genesis 6, 7 and 8 it was a boat. It literally was any kind of a container or a box, or in that case a boat. An Ark was something that contained something.

IT ALSO HAD IN THE BOX SOMETHING ELSE BESIDES AARON'S ROD THAT BUDDED and the tablets of stone of the Law. Those tables of stone certainly must have only contained the 10 commandments, that's for sure, because they weren't big enough to have engraved all those ceremonial laws of the sacrifices. In other words, they contained what was known as the moral code, the moral law, the 10 major laws. What else was in the box?

THIS THING WAS BETTER THAN A REFRIGERATOR! Not even a refrigerator could have done what the Ark did! Here it contained this rod that budded. (Peter: Did it have some manna?) It had some manna! There was a dish of manna in the box to remind them how God had fed them in the wilderness. (Ex.16:33; Heb.9:4.)

AN YOU IMAGINE, THAT MANNA KEPT FROM THE TIME THEY FIRST PUT IT IN THERE FOR HUNDREDS OF YEARS, and pretty soon you're gonna find out how long.--When ordinarily it only kept how long? (Peter: Just that day, you had to eat it that very day.) You had to eat it right away or the next day it was spoiled! There was only one day of the week that it kept for two days and didn't spoil. What they gathered on Friday always kept over Saturdays so that they wouldn't have to go out and gather anymore on Saturday and work. They say it was something even a little bit sweet like coriander seed, and it was kind of a sweet bread.

WELL, IT HAD A SAMPLE OF MANNA IN THE BOX, Aaron's rod that budded, tables of stone, I can't remember if there was anything else. At least those are three of the major things I remember were in there: All these famous souvenirs of their past history and events.

THEN THE TWO CHERIBUM, ONE ON EACH END OF THE BOX, and which way were they looking? Outward or inward? (Peter: Inward.) How do you know? (Peter: Because I've seen pictures before.) Well, that's true because they were supposed to be looking inward. And how were their wings? Well, if you want to read the exact description, you can read it in the Bible, we don't have time now though. You can go into that yourself. But they had their wings outstretched toward each other with the wingtips touching, sort of like they were hovering over the box. (Exodus 37.)

BECAUSE THE MOST IMPORTANT THING IN THE BOX WAS NONE OF THESE THINGS. In fact, it wasn't a thing. And it wasn't exactly in the box but it hovered between the two angels, and what was that? You look like you're ready to say something. (Alfred: The Spirit of God?) The Spirit of God! And it had a name.

IT WAS A VERY BRIGHT LIGHT, SO BRIGHT THAT THEY DIDN'T EVEN DARE LOOK AT IT OR IT WOULD BLIND THEM. And it was called what? Maybe you never heard of it before. It was called the Shekinah Glory. It comes from a Hebrew word, S-H-E-K-I-N-A-H, as I recall. It was a very brilliant light representing the Spirit of God.

THAT DAY HE SYMBOLICALLY TOOK THE SINS OF THE PEOPLE UPON HIMSELF. It was symbolised by the ceremony and the blood of the sacrifice, etc., he was sprinkled with it and he went back behind this huge heavy curtain.

THE CURTAIN OF THE TEMPLE OF HEROD--and BY THAT TIME THEY WERE REALLY GETTING FANCY--WAS GUESS WHAT? They said it was one of the most beautiful and gorgeous fabrics ever woven, and how they could have ever even woven such a thing I don't know, but it was extremely heavy. And the reason it was so heavy, it was so thick. It was about 4 inches thick!

WHY DID GOD REND THE VEIL IN TWAIN?--Because otherwise nobody could see back there, right?

NOBODY ELSE WAS ALLOWED TO GO BACK THERE. Nobody ever saw back there. Nobody was ever allowed to see the Ark and the Shekinah Glory. Once the Temple was built and it was placed back there, only the high priest could ever go back there to find out whether God was till around. But when that veil was rent in twain and it fell apart, the whole public could look in! And what do you suppose they saw?

WHY DID GOD, IN A SENSE, DRAW THE CURTAINS FROM OFF THE STAGE and LET YOU SEE WHAT HAPPENED? Not only had the Shekinah Glory departed, do you know what else departed?--The whole Ark was gone! This is one of the greatest secrets of Jewish history that they have hushed up, like they hushed up who Paul was and Jesus and all the rest. They tried to hush up the whole works. They tried to hush up the knowledge of the Resurrection, everything.

BUT THAT IS ONE OF THE BIGGEST SHOCKERS OF ALL! That has been one of the great mysteries of Jewish history, what happened to the Ark? Because at that time it was still there, until suddenly it had disappeared! The Jews have all kinds of theories about it. They claim, "Well, we don't even know how long it might have been gone. It might have been stolen years before because nobody ever went back there but the high priests and maybe they were all covering it up."

BECAUSE THEY DID COVER IT UP AFTER THAT! They apparently sewed up the veil and put it up again, and they hushed it up and covered it up as quick as they could to not let the people know that the Ark was gone and the Shekinah Glory of God was gone!

AND THE NEXT TIME WE SEE THE ARK IN THE BIBLE, WHERE IS IT? (In Heaven!) (Rev.11:19.) It went to Heaven, with the Shekinah Glory representing the Spirit of God, and it was gone! Can you imagine the consternation of those scribes and Pharisees who killed Him and the high priest and all the priests? There must have been hundreds of people there in the Temple on this very high holy Sabbath Eve.

I'm also the webmaster of jamesjpn.net. You can read my bio there.
Are you sure you want to report it?