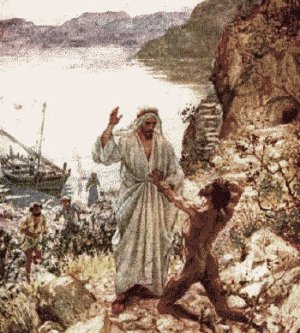 MR. MACHOWSKI HAD A SPIRIT NAMED TOM. They used to have a palmist in their side show in this carnival that he ran who had real gifts--this crystal ball palmist and mystic woman--and he thought it was something good.

BUT EVEN THE FAMILIAR SPIRITS FREQUENTLY WOULD CONFESS CHRIST: "Thou art Jesus, the Son of God! Art Thou come to torment us before our time?"! (Mt.8:29) The spirits confessed the disciples, the girl followed them around saying: "These are the servants of the Most High God which show unto us the way of salvation!" (Ac.16:16-18) In this case the spirit was confessing the truth and was almost good advertising for the Apostles! Everybody in town was familiar with this girl already, and her keepers, and that she was a fortune teller or medium, she would tell them things, and she was saying good, she was telling the truth.

I THINK SHE JUST GOT TO BE A NUISANCE! Paul just got annoyed at having somebody following him around all the time saying, "These are the servants of the Most High God, which show unto us the way of salvation," etc. They got a little weary of it and he cast it out of her. Then her keepers got mad because their source of gain was gone!

MR. MACHOWSKI BELIEVED IN GOD and HE FIGURED THIS WAS A GIFT OF GOD! This medium had travelled in their sideshow and he said, "I'd like to have that kind of a gift!" So he got this spirit named Tom who talked to him, and he talked to it, and he even told him how to play the races!

HE LIKED TO GAMBLE IN THE HORSE RACES, so the spirit Tom would pick up the pencil and write down the name of the horse that was going to win such and such a race tomorrow, and he made a mint betting on the races! Then I guess Tom wanted to teach him a lesson--or the Lord wanted to teach him a lesson that God is in control of the spirits too! He figured that he was just going to really make it now and all of a sudden Tom began giving him bad steers and he just lost his shirt, lost everything! Tom just laughed and thought it was a big joke! So he got very upset about it with Tom, and that's when he got saved!

HE'D GO INTO A ROOM, TURN OUT ALL THE LIGHTS IN THE DARK and TALK TO TOM, and TOM WOULD TALK TO HIM! Tom would pick up a pencil and write down things, race tips, etc.

HE THOUGHT TOM WAS A GOOD SPIRIT, A "WHITE ANGEL" AS SOME SPIRITISTS CALL THEM--the white angels and the black angels, the black forces and the white forces.

MACHOWSKI DIDN'T REALISE THIS GUY TOM WAS AN EVIL SPIRIT UNTIL AFTER HE HEARD A RADIO SERMON ABOUT EVIL SPIRITS THAT SAID, "Beloved, discern the spirits and try the spirits to see if they be of God, every spirit that confesseth that Christ is come in the flesh is of God." (1Jn.4:1,2.) So he got saved on a radio sermon, first of all, then he went to Moody Church and heard a sermon about spirits.

THE FIRST THING HE DID, HE BORROWED A BIBLE FROM A FRIEND OF HIS that he'd seen on their table. He never saw them read it, but he saw it on their parlour table for a decoration. He brought it home and pulled all the blinds to go to work to talk to Tom as usual. He said, "Now Tom, I just learned today that there are evil spirits, and I'm going to find out which you are!" And Tom just got furious! He didn't want to talk about it, he argued, he didn't even want him to open the Bible, he really got angry. Mr. Machowski was stubborn and insisted, he opened the Bible and began to read this.

HE SAID, "NOW LISTEN, IF YOU'RE A GOOD SPIRIT I WANT YOU TO CONFESS THAT JESUS CHRIST IS COME IN THE FLESH, and if you don't, I'll know you're an evil spirit!" And Tom just practically blew a fuse! He cussed and he swore and everything! He couldn't get around it so he said things like, "Oh, I believe in Jesus! Of course I believe in Jesus! I believe Jesus existed, blah blah blah!" Well, "even the devils believe and tremble" (Jam.2:19) and they confessed Christ right to His face! Well, that's one thing, but it's another thing to receive Christ and to confess that He has come, particularly in this case, into your flesh!

1JOHN 4:2 IS A RATHER WEIRD VERSE, BECAUSE IT'S HARD TO UNDERSTAND HOW TO CONFESS THAT CHRIST HAS COME IN THE FLESH. I've heard more preachers preach on that, and they usually preach it means that you must confess the historical Jesus Christ who came to Earth, that He did come to Earth, that He was the Son of God and He came in the flesh. But I do not believe that is all there is to it, because that's not enough!--And it was not enough to convince Mr. Machowski!

AND HE SAID HE KNEW RIGHT THEN and THERE THAT TOM WAS AN EVIL SPIRIT! He said, "Well, you get out of here, I don't want to have anything more to do with you!" Well, I'm sorry to say Tom didn't leave him alone. But at least Mr. Machowski was no longer under the control of this evil spirit anyway. Thank God he wasn't ever possessed of this demon apparently, but he was in communication with him and talked with him and they talked back and forth.

AFTER THIS TOM DID EVERYTHING HE COULD TO DISSUADE HIM! He'd even go to church with him and sit beside him in church and talk in his ear, believe it or not, and make fun of what the preacher was saying. "Ah, that's not so, you know that the Bible says something else!"--Just like the Devil! The Devil quotes Scripture, he quoted Scripture to Jesus when he was tempting Him, twisting the Scriptures and taking them out of context. But the Lord just fired the Scripture back at him the way it should have been. (Luke 4:1-13.)

SO FINALLY MR. MACHOWSKI GOT SICK OF TOM PESTERING HIM ALL THE TIME! He'd become a member of the Christian Businessmen and was beginning to preach on the street corner and witnessing about his salvation and all, and Tom was really bothering him when he was trying to preach, talking in his ear and everything. So he finally just resisted him in the Name of Jesus and said, "I want you to get out of here and depart from me and never come back again, in the Name of Jesus!" Apparently he'd learned enough by that time to try to fight him off, and apparently Tom gave up! "Resist the Enemy and he will flee from you!" (Jam.4:7.)

AND HE SAID, "WELL, I SAW TOM THEN!" Now whether he means he actually saw him or what, I don't know, but he said, "This drunk that had been cursing me from the crowd suddenly fell down in a fit foaming at the mouth, and Tom was gone, never bothered me again!" In other words, he went and possessed the drunk instead!

And they were all amazed, insomuch that they questioned among themselves, saying, What thing is this? what new doctrine is this? for with authority commandeth he even the unclean spirits, and they do obey him. -- Mark 1:27