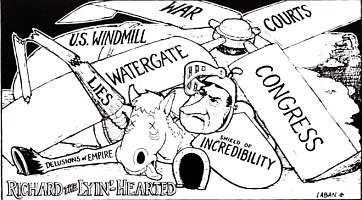 On November 12th, 1973, as the comet Kohoutek sped toward a rendezvous with planet earth, David received a prophecy based on the Bible verse Jonah 3:4: Forty days and Nineveh shall be destroyed. The scripture was applied to a 40 day period from December 21, 1973 to January 31, 1974 which was a warning period for the inhabitants of the earth to repent or else Nineveh, which was interpreted as the United States, was to be destroyed at some point afterward. This warning coincided with the comet Kohoutek's closest and most visible approach to the earth.

The Arabs and Israelis had just signed a cease-fire the day before and part of the message of the prophecy contained in the Bible verse 1 Thes 5:3 "For when they cry, "Peace, peace!"--then cometh sudden destruction!" warned about a false sense of security the cease-fire might engender. Things were far from over with the Arab-Israeli problem. This has been so true of the situation in Israel: no matter how much peace is talked about it always ends in more destruction.

Another part of the prophecy stated "For the heat of the sun (comet?) shall be sevenfold, and men shall gnaw their tongues for pain for the travail that shall come upon them when the Lord shall arise to shake terribly the Earth!"

When all was said and done, the comet was not as nearly as visible as expected and many critics concluded that the prophecy was false since even long afterwards America was not destroyed and the heat of the sun was not sevenfold etc.

Prophecy, however, can be a very mysterious thing. What one thinks is being said in the message may not be what is actually meant and may be misunderstood--even by the person receiving the prophecy. The prophet Daniel, for instance, at times did not understand what he was hearing and viewing.

Not all the parts of a prophecy are fulfilled at the same time either. Take the prophecy of the destruction of the ancient city of Tyre for example. (Ezekiel 26) Part was fulfilled when Nebuchanezzar, king of Babylon, leveled the city. It took about another 250 years for the rest of the prophecy to be fulfilled by Alexander the Great.

David was a little upset by people who thought he had pinpointed the day America would fall. He rightly explained that the Lord made no such statements, but only that a warning period was given. At any time after the warning period ended the events prophesied could take place. It seemed that this event was the fall of America.

I would like to suggest a slightly different interpretation for Nineveh. In the Family, we were used to referring to the United States as Babylon, not Nineveh. David assumed in this letter that both were the same and so used the terms Babylon and Nineveh interchangeably. But if we stop and think, Nineveh was the capital city of the Assyrian empire and the seat of its government. If the prophecy applied to the United States, what was its capital city and seat of its government? -- Washington D.C. In paragraph 13 of the "40 Days" letter it states, " Either January 11 or January 21 or January 31, somewhere in there God's going to destroy modern Nineveh, modern Babylon and its king. King Richard--the Last!--King Richard the Last! (King Richard the Lyin'-Hearted!) Forty days and Nineveh shall be warned, and 40 days again and Nineveh shall be destroyed!"

If we think of Nineveh as the U.S. capital and its government, then that is exactly what happened. On August 9, 1974, Richard Nixon resigned from the presidency of the United States. The government of "King Richard" had been warned and destroyed.

The government at Washington D.C. (Nineveh) was in a shambles. In the previous year a number of political disasters had rocked the Nixon administration. Spiro T. Agnew, the Vice-President, had resigned. Nixon had fired members of his cabinet and others had quit. A successor was chosen beforehand to take Nixon's place after his resignation, Gerald Ford--the only unelected U.S. President--a most unusual scenario. And up until now, as stated in the prophecy, there have been no other presidents by the name of Richard--fulfilling the phrase "Richard the Last."

The comet was at its closest and most visible during the 40 day warning period, it was just that it wasn't as visible as man thought it would be. Since we're dealing here with the realm of astrology in a sense--in other words how heavenly bodies affect our lives on earth--there is no need for it to be visible to the eye. Astrologers routinely include planets and other celestial bodies that are not visible to the naked eye. Uranus, Neptune, and Pluto are included in all horoscopes even though they can't been seen without a telescope. The planetary alignments of Jupiter, Saturn, and Neptune in November of 1989, which astrologers correctly pinpointed as a time of great upheaval and that coincided with the fall of communism, is an example of at least one planet, Neptune, that is on the "unseen" list. Yet it's influence was at work.

In conclusion, a few things are evident. If Nineveh is thought of as the U.S. seat of government, then it and its leader at the time, Nixon, were destroyed after a 40-day warning period, and up until now, Nixon has been the last Richard to hold office. The Arab-Israeli cease-fire at that time, and many other professions of peace have always terminated in more destruction. The comet Kohoutek's astrological influence, although the comet itself was not as visible as expected, still resulted in what could be considered a fulfillment of its significance: a foreshadowing of the destruction of modern-day Nineveh and its "King Richard." Some of the prophecy has yet to be fulfilled literally if that is what is meant by the heat of the Sun being seven times as hot and the earth being shaken, since some parts of prophecies are not fulfilled all at once.

[ Back to Home of Deep Truths ] [ More fulfilled prophecies ]