Excerpts from "The Computer Chip Dream" 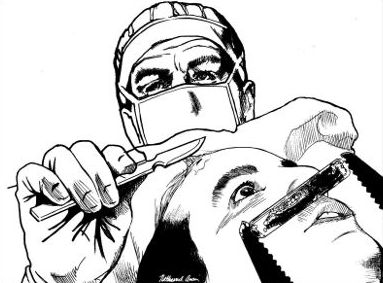 Doctor about to insert the Mark of the Beast RFID chip into a man's forehead!

I watched as they took the chip....they sank the pin into somebody's forehead! I don't know whether they'd already previously drilled a hole right in the middle in the center of their forehead into the brain, but they inserted the pin right into that little hole in their forehead and they sliced open the flesh and made a slice right across the forehead like that (motioning), horizontally, pulled the skin back so they could put the chip inside the skin and then they pulled the skin over the chip. Then on the outside of the skin they apparently closed it up with something, it seemed like they used some kind of surgical tape or something, just taped it together, because it's not a place where you bleed very much or anything, so that it would heal back together.

The chip had been all programmed in such a way that it not only carried your number and all your records, name, address and phone number and tax records, everything, but the shocking revelation I got in the dream was that it was not merely an identification tag just to identify you and to tell the authorities what your records were and all that, but it was to tell them even what you were thinking and to also be able to actually program your thoughts and your behavior so that once you had that chip implanted in your forehead you were their slave! I just assumed from what I was watching that it must have been the Mark of the Beast and it seemed like some kind of a number that showed through on your forehead after they put the chip in and sealed the skin, that there was a number there but I don't remember that too distinctly.

The main thing that shocked me was how they put the chip inside the skin where with that pin going into your brain and that thereby somehow their big main-frame computers could even tell what you were thinking! It was even sort of a little broadcasting thing of some kind or maybe they had to bring you up near the computer or scanner, I don't know, I didn't see all that. All I saw was them insert that thing, and I was horrified when they punched that pin right into the frontal lobe of the brain!

Back to Deep Truths Home