The Computer Chip Dream! --The Brand of the Beast!

A revelation from God to David Berg in a prophetic dream that the Mark of the Breast will be a computer chip implanted under the skin! This dream was 15 years before the first computer chip implant experiment was conducted! Ref: http://en.wikipedia.org/wiki/Microchip_implant_(human)#Initial_Trials

Doctor about to insert the Mark of the Beast RFID chip into a man's forehead!

I think the Lord was trying to show me what the Mark of the Beast is going to be, because the dream was very clear and I still remember it vividly!

I saw this little computer chip, it was only about an inch-and-a-half long, like maybe 3 centimeters, and about a half-an-inch, which is a little over a centimeter wide. It was real thin like a little tiny plastic strip but it had this needle-like pin attached to the back of it just about the size and length of a straight pin, only finer. The head of the pin was attached to the centre of the back of the chip or printed circuit board, but it was quite small.

First of all they were putting it on this big computer programming board of some kind. Apparently all of its circuitry was attached to the head of that pin and they were setting it down in different rectangles on this big board that had a little tiny hole in the middle of each one of them. They would set it down on this one and leave it there for a few moments. Then set it down on that one, leave it there for a few minutes with the pin thrust down into the hole in the middle of each rectangle. This big board with all of these rectangles was wired up to some big giant computer and what was evidently happening was that this little chip was being pre-programmed by the big computer.

Then I watched as they took the chip, and they sank the pin into somebody's forehead! They inserted the pin right into a little hole in their forehead and they sliced open the flesh and made a slice right across the forehead, like pulled the skin back so they could put the chip inside the skin, and then they pulled the skin over the chip. Then on the outside of the skin they apparently closed it up with some kind of surgical tape or something..

The chip had been all programmed in such a way that it not only carried your number and all your records, name, address and phone number and tax records, everything, but the shocking revelation I got in the dream was that it was not merely an identification tag, but it was to tell them even what you were thinking and to also be able to actually program your thoughts and your behaviour so that once you had that chip implanted in your forehead you were their slave! 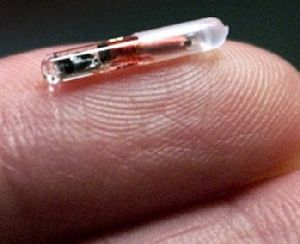 Now that sounds all very scientific of course and it looked very scientific, but when you add to that the spiritual power of Satan and his demons and the control that they will have over minds and hearts in those days, then you realise what a heinous, fiendish, demonic system it's going to be! All of its subjects will be absolute robots who will take their commands and orders directly from the central computer and broadcasting station and it will control their thoughts, behaviour, actions, everything! This Mark of the Beast made you a literal slave under the absolute control of the authorities so that they could control your behaviour and know your thoughts.

Now that must be what is so horrible about that Antichrist System that God is so dead set against it and why He insists that all of them be slaughtered at the end of the Antichrist reign, because apparently they're all like brute beasts, created to be destroyed.

REV.14:9 And the third angel followed them, saying with a loud voice, If any man worship the beast and his image, and receive his mark in his forehead, or in his hand,

REV.14:11 And the smoke of their torment ascendeth up for ever and ever: and they have no rest day nor night, who worship the beast and his image, and whosoever receiveth the mark of his name.,

REV.19:20 And the beast was taken, and with him the false prophet that wrought miracles before him, with which he deceived them that had received the mark of the beast, and them that worshipped his image. These both were cast alive into a lake of fire burning with brimstone.,

REV.19:21 And the remnant were slain with the sword of him that sat upon the horse, which sword proceeded out of his mouth: and all the fowls were filled with their flesh.,

2PE.2:12 But these, as natural brute beasts, made to be taken and destroyed, speak evil of the things that they understand not; and shall utterly perish in their own corruption;

They have become the absolute robots of the Antichrist system. If you permit them to implant that thing in your head you've sold your soul to the Devil, because you no longer have your own self-control. From then on you were just theirs, period, that was it! The Mark of the Beast was going to be much more serious than we had ever dreamed!

Now I can't swear that I even saw a number on the outside, but I suppose, I had the feeling that there was going to be a number there, but maybe the number won't even show through. Maybe it can only be read by a computer or some kind of electronic gadget! You know, that would be very clever and very treacherous if they could hide that there so that you wouldn't know who was who! You wouldn't know who had one and who didn't, whether you were talking to friends or enemies, wouldn't that be clever though?

(Maria: Is anyone that has received Jesus ever going to submit to that?) No, never! The Bible indicates that the people who have the seal of God in their foreheads will absolutely refuse the Mark of the Beast! (Maria: Even if they only received the Lord when they were small?) When you receive the Lord you are the Lord's, thank the Lord!

Nobody who has really received the Lord, who has Jesus and the seal of God in their forehead is going to receive it! ( Rev.7 ) They're going to know how bad it is and that it means Hell for sure, so they're going to prefer to die than to receive it! And the Lord is going to give them places to flee to in the wilderness to hide and be fed and nourished. ( Rev.12 ) No matter what kind of a flood the Devil casts after them to try to capture them or whatever, the Lord is going to take care of His Own.

(Maria: Do you think the whole world, even the unsaved, will know that it means hell?) Well, that's our job, to tell them. I mean we're supposed to be telling them now what it means--the difference between accepting the Lord and not accepting the Lord. (Maria: Yes, but will they know that this little operation means that they're going to Hell?) Well, that's what the Bible says, just read it. All those that accept the Mark of the Beast are cursed and damned and doomed! ( Rev.14:9-11 ; 16:2 ; 19:20 .)

I think everybody has their chance. And I believe they will know what they are doing, they're surrendering themselves to the Antichrist, that's for sure! It was just like it settled their fate! It settled their doom, and then there's no chance any longer for salvation, for repentance or to change your mind! Your ability to change your mind was gone, your ability to control yourself was gone, and it was impossible to turn back! You had sold your soul to the Devil and were under his total complete control, and that's how bad it's going to be!

So may God bless and keep you in that hour, and I know He will, because you're His and you have the Seal of God in your forehead and you will never accept the Mark of the Beast! Hallelujah! Thank you Jesus! He'll give us the strength to resist and we would rather die than receive it! So thank You Lord! We know the Lord will bless and keep us in that day! In Jesus' name, amen.

Copyright © 1998 by The Family International
Request


On April 18, 2009 I received the following poem from Raymond Bell in Finland. I thought it really hits the mark! (Pun intended :-)

THE MARK OF THE BEAST

The New World Order: this is Year Number One.
We`ll start with the children, every daughter and son.

We`ll implant every baby, in the hand, in the brain,
so you know they`ll be safe, won`t get lost, or feel pain.

From the first cry of Mama, to the last gasp for breath,
all will be recorded, in the blackbox of life.

We`ll chip every criminal, and the mentally ill,
And then every adult, our quotas to fill.

There`ll be no more crime, because we know what you scheme.
Our Mind Control police, have you on their screen.

Accept my mark and all will be well.
Resist my orders and experience Hell.

And as you retreat, to your temples to pray,
your thoughts are recorded, so take heed what you say.

Think of the benefits, of joining my band.
You can pay for your shopping, by a scan of the hand.

That`s all for the moment. It`s time for a party.
Let`s all celebrate, the New World Order."

Lea (US) says...
This is weird. My 7 year old son had a dream of the bad guy hitting him on the forehead, making a cut across it and blood started coming down his face. He also said he had something in his hand, he showed how it was put there, he cut it open, his hand, put something in, and then closed the skin. He has NEVER been exposed to this before. He's 8 now.