Webmaster's note: This is the account of when David died and sat up halfway out of his body and saw his already deceased family doctor, Dr. Koger, who came to meet him! 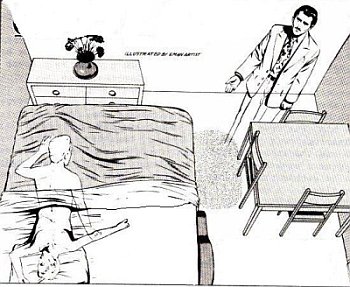 Dr. Koger was a very prominent man, a Miami physician. He was about as near to being a saint as any person I think I ever knew: What I'd call a real saint, a very good man, always unselfish, sacrificial, thinking or others, always witnessing, always winning souls. And he was practically a father to me, a good father.

Anyway, sometimes he didn't think I treated my mother like I should, because he was so respectful of her, and I would argue or disagree with her. And the worst thing he would do--

He never laid a finger on me, but he would just cry, and oh me, that would break my heart! If I'd say something sharp to my mother or do something wrong, I'd look over at him and there would be tears. He was so tenderhearted!

SO NOW, TO THE STORY--IT WAS AT THE END OF AN EVANGELISTIC MEETING IN OCTOBER, 1953, and I was praying whether we should go with Mother to Miami to have another meeting.

And that night, during the night, I had this dream: The Lord showed me that we should go with my Mother and hold the meeting, but then He wanted me to establish a Soul Clinic Missionary School there, to send missionaries to the Caribbean and the Latin American countries from there. It just all unfolded beautifully!

"Lord, that's a great idea! Somebody really ought to do that, but You've got the wrong guy! I don't know a thing about running a Soul Clinic School. I taught school but I never had the responsibility of promoting anything like that!

"Lord, I don't know a thing about that, I'm not the right man for the job! I'm too shy and timid and I don't think I could ever run anything that big.

"Where am I going to get that much faith for enough money to run a school that would cost probably several thousand dollars a month? I'm doing well now if I make $100 a month or even get just my food!"

So I rolled over after I said no to God and went to sleep. Now I really don't know whether I dreamed it or whether it actually happened, but it was just as real to me as you sitting right there right this minute! I think maybe it really happened!

THE NEXT THING I KNEW I WAS SITTING UP IN BED, BUT MY BODY WAS LYING IN THE BED behind me! I was sitting half in it and half out of it, an my first feeling was, "Ah, this is great! I feel light as a feather, I never felt so good! I don't feel heavy anymore!" I felt like I could just give a little shove and I'd just float right off! At first I felt great, then all of a sudden I thought:

"If I'm dead, that means now I've got to go face the Lord, and I just said no to the Lord!" And I mean that really scared me, thinking about facing the Lord, having just refused to do what He told me to do!

And just that minute in the other corner of the room stood Dr. Koger!--And he was looking at me with that look, and I just knew he was going to start to cry, like he was ashamed of me! He never had to say a word, but

I knew he had come to get me! And he was taking me where I figured I was going to have to face the Lord and give an account of things! And right after saying no to the Lord I was really scared.

AND I'LL TELL YOU, I THINK I NEVER FELT SO CHEAP IN MY WHOLE LIFE! I never felt so little and so mean and so horrible to think that I'd refused the Lord, and now I had died and I had to go face the Lord!

I never said words out loud but I was thinking, "Oh my God, Lord, I am sorry! Lord, if only there was some way I could get back! If only I had another chance!"--Right away, just like that, I woke up instantly and I was lying in the bed just like I'd gone to sleep! I said, "Okay Lord, I'm on my way!"

We took off for Miami the next day!--And we had our school, thank You Lord! We built it up to where we had a staff of ten, and forty students. And we sent 38 missionaries to seven different countries and helped all kinds of other missionaries coming through there, some of whose works are still going!

That was one of the most supernatural miraculous amazing spiritual experience I ever had! I died! So there it is! That's what happened and that's what Dr. Koger had to do with it. Dr. Koger practically scared me into it! The first time I ever met a real ghost, a genuine spook!--PTL!