The Benefits of Backsliding

QUESTION: AFTER BACKSLIDING, DO YOU EVER GET BACK TO THE LORD AS CLOSE AS YOU WERE BEFORE?
Answer: Closer!

Question: But after Eve ate the "apple" she knew the evil and couldn't be simple again.
Answer: But she was a lot wiser and humbler! She believed a lot more, had more faith, and now knew the Lord was right!

QUESTION: BUT ESAU LOST HIS PLACE!

YOU LOSE THE INNOCENCE YOU HAD BEFORE THE "APPLE", BUT LESSONS OF WISDOM AND KNOWLEDGE THAT ARE ACTUALLY MUCH MORE VALUABLE ARE GAINED.

Question: But when you have so much knowledge and get away from the Lord, many times it's hard to get back.
Answer: It was a hard road for David, but look what it taught him. Compassion, humility and gentleness.

BACKSLIDING IS A HARD SCHOOL Look at Jacob in the school of Laban: Jacob was really crooked until he had to work under someone even more crooked than he was! But it finally broke him, and look what he gained. Before his downfall, he was only "Jacob the Deceiver" But afterwards, he was a "Prince of God and Man"!

IT'S FUNNY HOW WHEN PEOPLE LOSE THEIR INNOCENCE THEY DON'T FEEL THEY ARE AS CLOSE TO THE LORD AS BEFORE. That's because they don't really realise what God's righteousness is. Their idea of righteousness is so different from God's. When you feel so righteous and good, it's because you're self righteous and not closer to God, but closer to your self! It's a perverted idea from the churches--a kind of "sinless self-perfection." 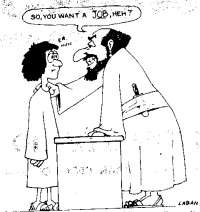 DAVID WAS FAR MORE RIGHTEOUS AFTER HE BECAME A GREAT SINNER--than he was when he was so haughty and self-righteous! One reason why I really need to confess my sins and tell everybody about them, is because it really helps keep me humble! It helps you to be honest with yourself and with others and with the Lord.

CONFESSING THAT YOU'RE A SINNER, really exposing yourself and your sins, reminds you you're no picture of purity and innocence! You no longer feel quite as angelic, but you're a whole lot more saintly according to God's idea of saintliness! 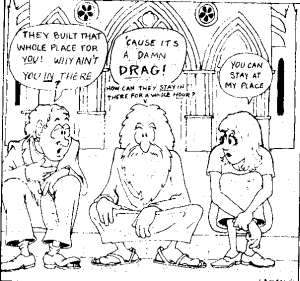 THE WORLD EQUATES GOODNESS WITH GODLINESS, BY WHICH THEY MEAN SELF-RIGHTEOUS PERFECTION. Sinfulness they equate with Devilishness. But the Lord said the sinner was closer to God than the so called sinless self-righteous perfectionist!--The drunks, harlots and drug addicts are closer to God, for God's way up is down.

GOD GETS HIS GREATEST VICTORIES OUT OF SEEMING DEFEAT. Jesus said, "To whom much hath been forgiven, the same loveth much." David sinned a lot, but God called him a man after His own heart!--He was after God's heart!

THAT SELF-RIGHTEOUSNESS IS A WORKS TRIP! It's a deceit of the Devil that you were closer to God when you were pure and ignorant! It's a lie that Adam and Eve were closer to God when they were living in the Garden!--They weren't driven from the presence of the Lord--they were driven into the presence of God to know Him in a way they'd never known Him before! They were driven out of the Garden in to a position where they had to get closer to the Lord to survive and to be saved! 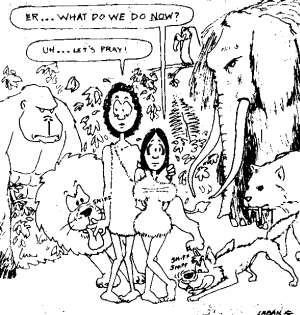 THE GREATEST MEN IN THE BIBLE WERE GUYS THAT MADE TERRIBLE MISTAKES and realised they were sinners, that they needed God. Some people have said that Joseph was the only guy in the Bible about whom there was no recorded mistake. But I can remember when I was little boy in Sunday School thinking: "What a stupid idiot he was to go and tell his brothers when having dreams like that! He was a typical little spoiled brat, and if he hadn't bragged about his drams, showing off to his brothers about how he was so superior, he wouldn't have gotten nearly killed and thrown into the pit and sold into slavery in the first place!" 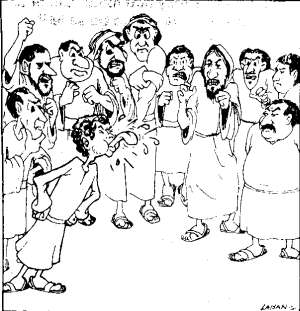 BUT THAT'S WHAT THE LORD HAD TO USE TO TAKE HIM DOWN--the Lord had to make a slave and prisoner and criminal of him to humble him, before he was able to be exalted and become the Saviour of his people. He was a real spoiled child!--What was he doing at home with his father instead of out helping his brethren take care of the sheep? Obviously his dad didn't make him work very hard!"

WHEREAS GOD'S IDEA OF RIGHTEOUSNESS IS THE PITIFUL, HOPELESS, LOST, HUMBLE, LOVING, SINFUL SINNER who knows he needs God! Those He came to save! He came not to call the righteous to repentance, but sinners! There are churchy people who give into the gratification of the flesh in overeating, for example, but don't think a thing of it! But in gratifying the flesh sexually they think, "Oh, that's a sin, so terrible!" But you can't find any place in the Bible where normal sex is counted as a sin!

SO GOD'S IDEA OF GOODNESS IS GODLINESS--A SINNER WHO KNOWS HE NEEDS GOD and depends on Him for Salvation--not the Devil's church, self-righteous, hypocritical Pharisees who think they can save themselves by their own goodness! So sometimes backsliding can actually be good for you to wake you up to what a hopeless helpless sinner you are without God's help! Then there's hope you'll turn to God for help--whereas the self-righteous think they don't need His help, and are lost!

BUT WHILE THERE IS LIFE THERE IS HOPE. Isaiah says: "Let the wicked forsake his way, and the unrighteous man his thoughts: and let him return unto the Lord, and He will have mercy upon him and to our God for He will abundantly pardon" (Isa.55:7).

I BELIEVE EVERYONE WILL GET THE KIND OF REWARD THAT HE REALLY APPRECIATES AND DESIRES. How can you judge the reward? The body and the material are satisfied with the material things of the world, but the spiritual ones have to have spiritual reward to be satisfied. 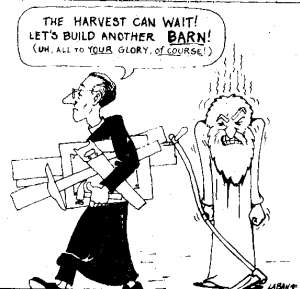 NEVERTHELESS, IF THOSE DEACONS WHO ARE MATERIALISTICALLY-MINDED ARE REALLY DOING IT FOR THE LORD and the sake of God's children and the glory of God then I believe the Lord will reward them accordingly. That's the sort of thing they like, so God will reward them greatly materially and will treat our kings like kings! God will give them their heart's desire.

GOD GETS SOME OF HIS GREATEST VICTORIES OUT OF SEEMING DEFEATS! God's way up is down to the defeat of self and self-righteousness!--Up to the victory of the cross and death to self for others!

DO YOU FEEL DEFEATED AND AT WITS' END CORNER?--Turn to God!