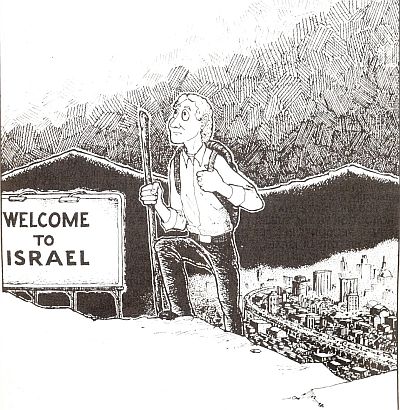 I don't think I've ever been as weak as I've been a few times lately. I've really had a battle! This has been my lifelong dream! To see Israel! It was a dream that I just knew was going to come true some day! And when it happened, I found out that the real Living Israel was far more important than a piece of land, a bunch of rocks! And it's been almost a psychological wrench!

Now I know how people feel when they have nervous breakdowns! It's a physical and nervous thing, strain on your body, your mind, and your spirit!--And then the Enemy attacks! Everything just looks like a mountain and you just almost become hysterical. But it's not the Lord's fault!--It's my own fault! I overdid! I abused my body! I didn't stay in the Spirit--and in this especially trying time, I should have lived more in the Word!

The Lord broke the news to me on the boat to prepare me for the shock I was going to receive when I got there.--Thank God for His Mercy! But I was still shocked, terribly disillusioned and terribly disappointed!--So often if it were not for that spark of faith, you'd just flicker out. But that spark of faith fans the flame. It's like God blowing on the little ember and bringing it back to life again! It comes so much through hearing the Word!

First impressions are usually the right ones if you're truly following the Lord! And under the first shock of the first revelation, and the first inspired disillusionment, I saw things in the Spirit as they really were!--Like the voice of conscience! And I saw things the way God really sees them! But then I began to be hardened to it! I liked the land and the people, and I didn't mind too much their rebellion against the Lord! I should have continued to be infuriated, as God is! He is angry with the wicked every day! Think of those people! Two thousand years of the knowledge of Jesus Christ, and they're still in rebellion! "Ye do always reject the Holy Ghost!" (Ac.7:51.)

I probably should have picked up and LEFT ISRAEL THEN and THERE, AFTER WE HAD GOTTEN THERE and GOD HAD REVEALED CLEARLY THE SITUATION TO ME! A prophet of God who has the message of God either has to give it, or he no longer hears it or feels it, and he then becomes guilty with the wicked!

It's like quenching the Spirit! Truth resisted loses its power over the mind. You keep quenching the Spirit and pretty soon He stops speaking, and if you don't give it, you lose it! You either have to let it out, or get out, one or the other! And if you try to compromise and pull your punches and tone it down, then God's Spirit tones the Voice of God down, and you don't hear it so much any more, and you're not so convicted any more, and you begin to get cooled off and hardened and calloused.

My first feeling and impression was to blast them, and get the hell out of there! But the longer I withheld and kept looking on the bright side and ignoring the evil, the more my spiritual eyes got out of focus, and I began to wonder what I was so mad about anyway! "These people aren't so bad; they don't know any better! It's all the fault of their leaders!"

But when you reject the Truth, then you have nothing left to believe but the lie! And that last week I was in Israel, I had compromised and rationalized so long that I began to wonder why I was leaving! It was to the point where I was literally forgiving them for hating Jesus!--And that's the one sin God won't forgive anybody for! He'll forgive you for every sin in the Book, except for rejecting Jesus--this is blasphemy against the Holy Ghost, the Spirit of Truth, which is Jesus! (Mk.3:28,29.)

You can't face a situation without doing something about it, if you're conscientious! You can't just pass by the poor man on the road to Jericho! You take action like the Samaritan did! You have to have conviction, or you can't live, and then you have to do something about your conviction, or you can't stand to live with yourself! You'll hate yourself, or you'll silence the voice of conviction and lie to yourself and become totally deaf, dumb and blind, so you don't even feel anymore!

Those last few days I kept arguing with the Lord: "But why do I have to leave now? Here I've come all this way. I've gotten to the land of my dream, and I'd like to just drift along with it! It would be so much easier than waking up."--Until I actually began to doubt my revelation. I went through a battle royal with the Devil, and sad to say, with the Lord, too.--A lot of times that's why you have to fight Devil so much--because you're fighting God and the Truth!

God had to take me all the way to Israel and bang my head against the wall to wake me up! Pretty expensive lesson!--But it was worth it! I know it now! I don't know it from the hearing of the ear!--I know it from the seeing of the eye! He had to bring me over here and let me see for myself, or I never would have believed any other way.

"But how long do ye halt between two opinions?" (1Kg.18:21.) "A double-minded man is unstable in all his ways." (Ja.1:6-8.) There's nothing that tears you apart and tears you down quicker than indecision.

WHEN WE GOT UP TO GO DOWN TO EITHER GET OUR VISAS RENEWED OR GET OUR TICKETS OUT OF THE COUNTRY, I honest-to-God didn't know which direction to go. And as I walked down that street in the rain--what a miserable, gloomy day--I felt about as dark and gloomy as the day, and I was so confused.

As I walked down Hamaginim Street, and I knew in the next block or two I was going to have to decide which way to go--to the right to the Immigration to renew the visas to stay, or to the left to American Express to buy our tickets to go--I really got desperate in prayer, and I just cried out desperately to the Lord: "Lord, the time has come--the point of decision! I've got to know now, Lord!--Right this minute, which way to walk, Lord!

"If I was right and that was the truth You showed to me about the Jews in Israel, then for God's sake, and my sake, and Your work's sake, show it to me again, like You did then! I've got to see it like You see it, Lord! I here and now acknowledge You.--You've got to direct my path and You've got to show me the truth like it is, Lord! I've got to have a spiritual conviction about this whole thing! Show me, Lord! Are these people good or bad? They look so good and they've treated us so well! But how do they look to You in the Spirit, Lord? It has to be a spiritual decision, based on the realm of the Spirit and spiritual truth!"

And then I had the most horrible experience!--All of a sudden the people I had been looking at were just like demons walking around in the streets. Instead of being so wonderful, they looked like devils in the spirit.--That if everything were suddenly clear in the spirit right now, if they could see me as I am, they would attack and kill me right now, like they did Jesus and Stephen and the rest of them!

It nearly scared the wits out of me! And I couldn't get to that ticket office fast enough! From the time I made that decision I began to feel better, and things began to click and everything fell into place! Praise the Lord! And today He just knocked me flat to make me see it even more clearly, and confess it, so you'd have the story!