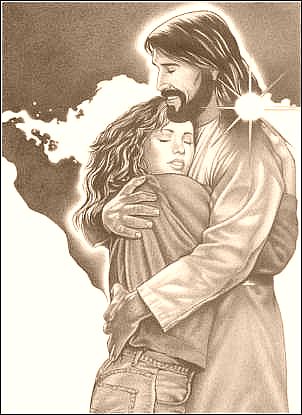 Jesus had to die not only physically, but in the spirit also. His spiritual suffering for our sins. Now your body can partly suffer for your sins, but the greatest suffering that sinners will ever do is not just death to the body--It is death to the spirit!

The worst death of the lost is a spiritual death, a spiritual suffering in which their spirits will suffer after this life in the world to come. Jesus in His death suffered not only physically but also spiritually such as the sinner suffers in the afterlife for his sins. Otherwise He could not have suffered for your sins. But He did suffer for your sins.

Think of what Jesus suffered for us!--Three days and three nights in Hell in the fiery heart of the Earth! He suffered then for all the sins of all mankind! Isn't that amazing?--Such love! He died that you might be saved!

So if you are born twice you only die once!--But if you're only born once you'll die twice! The first birth is a birth of water!--"Born of water"! (John 3:5)

But He says for the sinner, the one who does not receive Jesus and his sins are not forgiven, that in the end of the world they are going to be raised from the dead at the Last Judgment and judged according to their works, some in the Lake of Fire and some are going to be living outside the Heavenly City. (Rev.20 & 22)

"And this is the second death!" (Rev.20:14) Why? Because they were only born once and they never got saved, they never received Jesus, they were never born again. When you receive Jesus this is a new birth for your spirit, you're a new inner man.

So death is marvelous! It's freedom for the Christian! It's a wonderful liberation! For the believer in Christ it is being set free from this old body that gives us so much trouble.

It's much easier to die than live! Thank God for death, our graduation, our release! Praise God! God bless you with a good death! Happy flyaway!--I'll see you there!

So long until tomorrow!--Like the old song:
"When morning dawns, farewell to Earthly sorrow!
Farewell to all the troubles of Today!
There'll be no pain, no death in God's Tomorrow!--
When Morning dawns and shadows flee away!"


Copyright (c) 1998 by The Family International


Did this page make you glad? Please tell me about it! E-mail: webmaster@deeptruths.com
Back to Home of Deep Truths