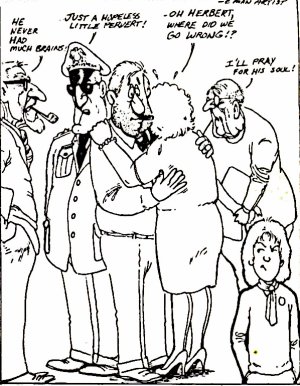 THE WORLD'S FIRST DROPOUT WAS LUCIFER who had decided to do his own thing instead of God's, and persuaded the next two dropouts, Adam and Eve, to do the same--and people have been dropping out ever since--some for God and some for the Devil!

CAIN DROPPED OUT OF FELLOWSHIP WITH GOD and his brother because of sin at the door of his heart, whereupon he assisted his brother, Abel, in dropping out for God as the first righteous martyr for the Faith, by killing him in jealousy--a typical picture of the Old Church versus the New Church--Works versus Grace!

ENOCH SAID, "STOP THE WORLD; I WANNA GET OFF!" and he walked so far with God, he never came back!

NOAH, TOO, said, "Stop the world; I wanna get off!" being warned of God of things not seen as yet, moved with fear, prepared an ark to the saving of his house, by the which he condemned the world, and became heir of the righteousness which is by faith"--and dropped out!

AND BY FAITH, ABRAHAM, WHEN HE WAS CALLED to go out into a place which he should after receive for an inheritance, obeyed; and he dropped out, not knowing whither he dropped! And by faith, he dropped into the land of promise, as a dropout in a strange country, camping out in tents with the Children of God, heirs of the same promise. Therefore, there dropped out of him so many of the stars of the sky in multitude, and these all dropped out in faith, confessing they were dropouts and pilgrims on the earth, desiring a better country, that is, an Heavenly: Wherefore God is not ashamed to be called their God, for he hath prepared for them a City, dropped out of the sky. "For I, John, saw the holy city, New Jerusalem, coming down from God," dropped out of Heaven!

JOSEPH DROPPED OUT OF FELLOWSHIP WITH HIS WAYWARD BRETHREN into a pit that landed him in a jail in Egypt so he could drop out of jail into the service of Pharaoh so he could later save his brethren--also dropouts from Israel--in time of famine!

LATER, MOSES HAD TO DROP OUT OF EGYPT and spend forty years in the wilderness so he could help six million children of Israel to do the same! And Brother, when they dropped out of Egypt, Egypt collapsed! Moses was able to do this because he "chose rather to suffer affliction with the people of God, than enjoy the pleasures of sin for a season; esteeming the reproach of Christ greater riches than the treasures in Egypt, for he had respect unto the recompense of the reward," when he would drop out of this life, into the joys of Heaven!

EZEKIEL HAD TO DROP OUT OF THE CAPTIVES OF ISRAEL and eat droppings of cow dung so God could give him wheels to take a ride into the future!

JEREMIAH HAD TO DROP OUT OF FAVOUR WITH HIS FAMILY, church, and government, and drop into the mud up to his armpits, and jail for the duration, so God could drop him out safe and sound when it was all over!

EZRA AND NEHEMIAH HAD TO DROP OUT OF THE KING'S SERVICE in a foreign country so they could drop the Jews back into Israel to restore Jerusalem and rebuild the Temple! Nehemiah refused to drop out of what he was doing for God on the wall, and come down and fiddle around with the systemites who were after his scalp!

POOR JOB HAD TO DROP OUT OF EVERYTHING he had and was, including his own self righteousness, to prove his faith and find the righteousness of God!

ALL THE EARLY CHRISTIANS WERE DROPOUTS from the System of their day, the Jewish synagogue; and later the martyrs were dropouts from pagan Rome and the apostate church of later years.

AND WHAT SHALL I MORE SAY, for time would fail me to tell of Martin Luther who was dropped out of the Roman Catholic Church for dropping out of its "Works" religion into Salvation by Grace through Faith--and its peasant followers dropped out with such violence that the System made war on them for years! Each of the reformers had to drop out of some System to forsake all and follow the Lord!

THE THIRTEEN ORIGINAL COLONIES HAD TO DROP OUT of the British Empire and fight the Revolutionary War to retain that freedom! The Southern States later tried to drop out of the Union for the same reason but were forced by the Civil War to remain in the federal dictatorship.

THE WESTERN PIONEERS DROPPED OUT of their comfortable living in the East to develop the lands of the West! The Texans dropped out of the States into Mexico to grab off a sizable hunk of that poor country!

SO WHY SHOULD WE BLAME THE YOUNGER GENERATION FOR WANTING TO DROP OUT of the present System to try to change the whole world and try to establish a new world order of the Flower Children of love, truth, peace, and freedom!

THE WHOLE OF HISTORY IS A RECORD OF NOTHING BUT DROP-OUTS--because they're the only ones that made news! There was nothing new about the rest of the people--the System robots who followed the party line--the conformists and conventionalists that nobody ever heard of! It was the non-conformists, unconventionalists, individualists, iconoclasts, rejects, and dropouts who really made History! You better believe it!

SO IF YOU WANT TO MAKE HISTORY, JUST BE A DROPOUT! If you want to sink into the oblivion of the forgotten man--conform to the System!

"Wherefore seeing we also are compassed about with so great a cloud of witnesses, let us lay aside every weight, and the sin which doth so easily beset us, and let us run (drop out) with patience the race that is set before us, looking unto Jesus, the author and finisher of our faith, who for the joy that was set before Him, (dropped out) endured the Cross, despising the shame, and is set down at the right hand of the throne of God. For consider Him that endured such contradiction of sinners against Himself, lest ye be wearied and faint in your minds. Ye have not yet resisted (dropped out) unto blood, striving against sin." Let us go (drop out) therefore, with Him, without the camp, bearing His reproach. (Hebrews 12:1-4, 13:13) Drop out with Jesus!

"I beseech you therefore, brethren by the mercies of God, that ye present your bodies a living sacrifice, holy, acceptable unto God, which is your reasonable service. And be not conformed to this world (this System), but be ye transformed (drop out) by the renewing of your mind, that ye may prove what is that good, and acceptable, and perfect, will of God." For, "Except a man be born again (drop out), he cannot see the Kingdom of God." "Follow Me (drop out), and I will make you fishers of men. And immediately they forsook all (dropped out) and followed Him." God's true Church, the "Ecclesia," the "called out ones," are all dropouts! Drop out! For God has nothing but dropouts! Hallelujah! Are you a dropout?