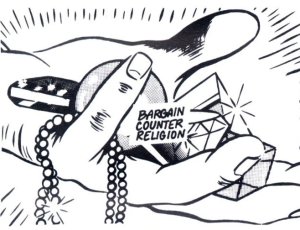 THE CHEAPEST THING IS NOT ALWAYS THE BEST THING. Bargains frequently aren't worth it and may turn out to be a bigger gyp than the higher-priced real thing. You may even get less than what you paid for in buying a bargain. You may have paid less for it but gotten very much less than if you'd paid a little more and gotten quality!

It's like my Mother used to say about eating places: Why go to the "Sign of the Greasy Spoon" and the "Stinky Kitchen" and get cheap junky food that you're not even sure is clean to save a quarter or 50 cents?--Your life is worth more than that!

IT REMINDS ME OF WHAT MY MOTHER USED TO SAY ABOUT BARGAIN COUNTER RELIGION: IT DOESN'T COST YOU ANYTHING. David said, "I will not give unto the Lord of that which hath cost me nothing." (2Sam.24:24) His religion had to cost him something, it had to be worth something.

MOST CHURCHES THAT I KNOW OF ARE GYP JOINTS where they're claiming to sell the people valuable goods, worth something that's going to get'm to Heaven, when actually it's a gyp! But the people are willing to buy it because it doesn't cost them very much, it doesn't require much sacrifice!

They can go and selfishly live for themselves and never witness, never help others, never help the missionaries, never really give, never really do anything for the Lord, totally selfish, living completely for themselves and for Mammon and giving virtually 99% of their time to their own selfish pursuits and maybe giving less than 1% of their time to the Lord!

They figure, "That's pretty cheap religion, doesn't cost me very much. Doesn't cost much of my time, I don't have to pay much money for it, and yet it looks grand and great!" They go to a pretty building and they have pretty services, and they think they're getting a bargain because it costs them so little!

AND OF COURSE THE WORST GYP IS BARGAIN SALVATION THAT DOESN'T SAVE YOU and you wind up in Hell when you thought you'd paid your way to Heaven, like a lot of these religionists.--Whether they pay with money or penance or church-going or whatever.

It cost a priceless gift to get saved, and that was Jesus and His Blood, and receiving Him for your salvation is the only thing that's going to save you. That's the highest-priced gift anybody could ever receive, the highest cost anybody could pay for your salvation, and only Jesus could do it. Anything less is bargain counter religion that won't save you, and is not even worth what you pay for it!

No matter how much you sacrifice and pay for it by your own works, it's cheap, it's too cheap, because you won't get the real thing, and you'll wind up in Hell after all your hard work and all your sacrifice and all the cheap price you paid for it. It still wasn't enough, for only Jesus could pay for it, because the price was too high for you.--You could never afford it.

It applies to everything.--No matter what field of life, don't trust bargains. They may not even be worth what you pay for them, especially if they're worth nothing, like bargain counter salvation, which isn't salvation at all!

TIME WASTED IS GONE FOREVER, and though it was easy to waste, it can be pretty expensive. Time well-spent may have cost a lot in effort and strength and sacrifice and love and whatever, but when we see what our reward is going to be even here and now as well as hereafter, it's a bargain.

We may find out that a lot of the stuff we did and the time we wasted was no bargain. We paid several times what it was actually worth for that pleasure or that time wasted, it was pretty expensive. And this religion some of our backsliders have, when they find out how much they're losing by this easy religion, they're going to find out it was pretty expensive religion!

If you pay $1000 for something and it's only worth $100, that's no bargain. But if you pay $10,000 and it's worth $100,000, that's a bargain! It cost you more but it's worth a Heaven of a lot more! Praise God! Thank you Lord! So even if a thing didn't cost you very much, if by buying it you're losing even more than it cost you, it's far more expensive than the thing that cost you everything, but is going to pay you even more.--What are you buying?