Giving to God! -- Do Christians need to tithe? 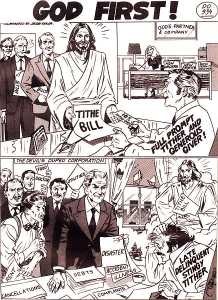 See an enlargement of this image!

SOPHIE WAS A DEAR LITTLE CHRISTIAN WASHERWOMAN IN SAN FRANCISCO who was always praising the Lord, even though she had to do so much laundry and worked very hard. One day, on the streetcar, she met a lady who knew her and Sophie said to her,

THE LADY REPLIED, "WHAT DO YOU MEAN, SOPHIE? YOU HAVEN'T EVEN BEEN OUT OF SAN FRANCISCO!" And Sophie said, "Oh, yes I have! You know that money I earn from washing clothes?--That money is me! It's my blood, sweat, tears and toil! It's a part of me and I gave it to the missionaries, and it has gone out all over the World preaching the Gospel with them wherever they went!--So I've been to all those places!"

WELL, SOPHIE WAS RIGHT! MONEY THAT IS SENT AS GIFTS TO SUPPORT GOD'S MISSIONARIES IS A PART OF THE SENDER!--It's the hard-earned product of their blood, sweat and tears shed for the Lord and His Work! Of course, we (members of The Family International)consider that virtually everything we've got ought to go to missions, and it's been our custom to forsake all to follow Jesus, to give everything, 100%, to preach the Gospel, to witness, win souls and go to the mission field!

AFTER ALL, JESUS INTENDED and CALLED FOR ALL OF HIS CHILDREN TO "GO INTO ALL THE WORLD and PREACH THE GOSPEL TO EVERY CREATURE!" (Mark 16:15) But if for some reason you feel you can't go or you just won't go, the least you can do is send part of yourself out there in your gifts to missions and the missionaries! God's Word says, "How shall they preach except they be sent?" (Rom.10:15) They have to be sent by somebody!--Somebody has got to do the sending and the paying and the supporting!

SO IF YOU CAN'T GO, THEN GIVE! If you can't be a missionary, support one! "The labourer is worthy of his hire." (Luke 10:7) It is the duty, the obligation, the responsibility of God's children who are not going to the field and becoming missionaries, preaching the Gospel to every creature themselves, to support and take care of those who do!

THOSE WHO WORK and EARN MONEY AT SECULAR JOBS should use that money to help support God's work and His missionaries. They can thereby invest their money in souls and in eternal dividends, and I'm sure God will bless them for it, even though they're so involved with secular business or a System (secular) job.

DAVID LIVINGSTONE, THE WEALTHY BRITISH MISSIONARY WHO PIONEERED THE JUNGLES OF AFRICA and died there on his knees, said, "I never made a sacrifice for God, but He repaid me far more than I gave up and returned to me far more than I forsook!" He could never outgive God! And although he gave his life, he'll reap eternal dividends of immortal souls, thousands saved forever!

YOU'LL FIND THAT BY GIVING TO GOD and HIS WORK, YOU'RE NOT GOING TO REALLY BE SACRIFICING AT ALL! You're simply going to be investing, and the returns are going to be far beyond anything you have ever invested in before. He says, "Give, and it shall be given unto you. For with the same measure that ye mete withal it shall be measured to you again. Freely ye have received, also freely give!" (Luke 6:38; Mat.10:8)

IF YOU TAKE CARE OF GOD'S SERVANTS and HIS MISSIONARIES, the Lord will take care of you! The Bible tells us about a terrible famine in the days of Elijah, and a poor widow of the town of Zerapath who was out trying to save herself and pick up a couple of sticks to make a fire to bake one last bread-cake for herself and her son before they died. But God's Prophet came along and said, "Bake me a little cake first, and then after that for thee and thy house. And the barrel of meal will not waste and the cruse of oil will never run dry!"--And that's exactly what happened! (1Kings 17:10-16)

IT REMINDS ME OF WHEN I WAS A POOR STUDENT IN BIBLE COLLEGE trying pitifully to exist on only $25 a week in a little 14-foot trailer with a wife and two small children, when my wife suggested that God would bless us if we would tithe of even what little we had.

I OBJECTED THAT WE COULDN'T POSSIBLY SPARE EVEN A PENNY OF IT, THAT WE COULDN'T AFFORD TO TITHE, as it was money that we had to live on, to eat, to pay our rent, etc.--It was our living! But when we prayed and asked the Lord about it, we opened the Bible right to the story about another widow and the widow's mite, in which she cast it into the treasury, even though it was all of her living, all she had!

"SHE CAST IN ALL THAT SHE HAD, EVEN ALL HER LIVING!" (Mark 12:44) Well, how could I argue with that! I'd been saying we couldn't cast in 1/10th of our living, and here was this widow casting in all of her living, all she had! So we tithed our $2.50 that next Sunday to the church, which was the only place we knew to tithe, and right away Monday morning when I showed up at Bible class, the Professor said, "Here's something someone gave us to give to you."--It was a $20 bill!--Nearly 10 times as much as we'd tithed!

THE LORD BEGAN TO BOUNTIFULLY BLESS US just for giving 1/10th of what I considered was our essential living expenses, which I thought we just couldn't afford to give. But that's the way God is: He loves to outgive you, and He'll never let you outgive Him! The more you give, the more He'll give you back! His Own promise in Malachi 3:10 says: "Bring ye all the tithes into the storehouse, and prove Me now herewith (test Me), saith the Lord of hosts, if I will not open you the windows of Heaven, and pour you out a blessing, that there shall not be room enough to receive it!"

JESUS EVEN PROMISED A HUNDREDFOLD IF YOU GIVE ALL! THINK OF IT! ONE HUNDRED TIMES AS MUCH BACK "NOW, IN THIS LIFE, and IN THE WORLD TO COME LIFE ETERNAL!" (Mark 10:29,30) It may not all be in dollars and cents, it may be in fruitfulness of service or in protection or in saving you from accidents or sicknesses, etc. God can save you money in more ways than one and you can't count His blessings in purely financial terms.

SO REMEMBER THE LITTLE WIDOW'S MITE.--YOU CAN EVEN CAST IN ALL YOUR LIVING and STILL NOT HURT, BECAUSE GOD WILL BLESS YOU FOR IT! I'm not even sure the Temple needed it, but God honoured her sacrifice just the same. If your motive is right and your intentions are good and pure, God will bless you for giving and honour and prosper you for it, praise God! He'll never let anybody get hurt by giving or tithing! He may let you think you're going to sacrifice and suffer for it and that it's hard, but He'll always more than repay!

"WHATEVER THOU SPENDEST", HE SAYS, "I WILL REPAY!" (Luke 10:35) That's what the Lord said in that wonderful story of the Good Samaritan!--About the poor man who got beat up along the road by thieves, and the Good Samaritan picked him up and took him to the inn and told the inn-keeper, "Whatever you spend, I will repay you!" The Good Samaritan is really like the Lord, and the inn-keeper is like His steward, like you or me!--And whatever we spend to rescue people and save souls, He will more than repay!

THAT'S ONE REASON WHY WE PUT EVERYTHING WE'VE GOT INTO MISSIONS and TO REACHING FOLKS WITH THE GOSPEL--and WE'RE STILL GOING STRONG! We try to use God's money very prayerfully and carefully and make it go as far as possible, and our friends and supporters know that and realise that they're investing well in a good missionary movement and effort that's really getting results and fruit.--Of course, I'm sure they also appreciate all of the thrilling literature and books and tapes and everything else that we send out to our faithful tithing members and supporters every month!

WE ARE OBEYING THE LORD'S COMMAND TO "GO INTO ALL THE WORLD and PREACH THE GOSPEL TO EVERY CREATURE!" (Mark 16:15)--Not build buildings or acquire properties, as most denominations have done! This alone has saved us millions and kept us on the move for the Lord, busy in field after field, where we reach and witness to people wherever they are! We simply go out where the people are to be found and give them His Love and His Good News of the Gospel of Salvation in Jesus!--Without the hindrance of extravagant buildings or great denominations or any of the other wasteful trappings of the modern religious system.--And we're reaching the World in this Last Generation!

GOD HAS BLESSED and PROSPERED US TILL WE HAVE BECOME THE MOST ON-FIRE, FASTEST-GROWING, SOUL-SAVING MISSIONARY GROUP (The Family International) IN THE WORLD TODAY!--Not mere church members, but on-fire, dedicated missionaries and soul-winners for Jesus!--Covering more nations, preaching more Gospel, publishing more literature, getting on more radio and TV stations, witnessing and spreading more rapidly across the Earth in our work for Jesus than any other religious group I know! Glory to God!