Are you are Good Sport? 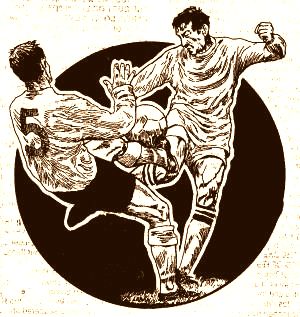 War is the ultimate combination of the worship of all these things, at what man considers his greatest, using the best of all of these!--Man at his best, which is his worst!--WAR! His most destructive worst, his greatest strength, his greatest genius, his greatest inventive power and his greatest spirit, patriotism or whatever you want to call it, is used for war and a competitive spirit against others who are doing the same!

The Olympics is a sports fair, a flesh fair, flesh peddlers! See how this competitive sports thing has been the final stages of every great civilisation and empire!--The worship of the body! It's very sexual too, as you notice, all these things are very sexy. So sex is included as a part, but in some ways a very minor part. Like the System, sports glorifies sex, but at the same time belittles it and pretends to dislike it.

IN FACT, IN THINGS LIKE SPORTS, SEX IS CONSIDERED A PHYSICAL WEAKNESS and not to be very much indulged in if you want to excel. You can look, but don't touch those pretty girls and sexy-looking men, whether it's swimming or gymnastics or whatever! The whole thing is a worship of the flesh and the worship of man with a competitive spirit of war, the very essence of contention and competition and struggle: warfare, and the perfect preparation for it!

Did you know that the Honduras - El Salvador war ... started over a football game? In fact, Ernest Hemingway, the world famous writer, who spent so much of his time in Latin America and Spain, said you could eliminate most Latin American wars and their causes by simply banning football or soccer! Those games get them so worked up into a frenzy against each other that nothing but a total all-out war can truly satisfy the spirit of it!

The ultimate fulfillment of sports is war!--Destroying the other guy's body that your body might live! War is the ultimate fulfillment of the competitive spirit: the destruction of others for self-preservation. Sports is war in disguise, and the Olympics disguised all this under the totally false and contrary theme song of "Peace"! That's their theme!--Isn't that something! So they speak peace while war is in their hearts, and they talk peace while they prepare for war--prepare their bodies for war .

In fact, in an article in Newsweek magazine (Sept. 4, 1972, pg.40) entitled "The Myths of Sport", a conference of 1800 scientists during the Olympics in Munich suggested that sports actually aggravate conflict and aggression, as well as damage bodies!

THEREFORE, THE WORSHIP OF SPORTS IN ALL NATIONS IS A SECRET WORSHIP OF WAR, the ultimate of all man's creations!--Destruction!--And it is supported by the warmongers, the Systemites of all Systemites! Sports have become the most nationalistic and patriotic of all the System's games, aside from its ultimate game, which is war! It is worshipped by the brutal, the violent and the cruel; and the sports the world loves best are the most brutal, the most violent, the most cruel and the most destructive, especially war! America is the greatest advocate on earth of both sports and war, and therefore the guiltiest of all! All these are an abomination to the Lord: Sports, supernationalism, and war!

SO WHAT ARE THE CHILDREN OF GOD?--THE CHILDREN OF PEACE and the love of Jesus and the love of the poor and the love of the weak! What have we to do with sports? And what place have we in the Olympics?--other than to cry out in protest against them and against the worship of man and the war games that increase the rich and destroy the poor!--A curse be upon them! Let them be accursed by every Child of God! And may God damn those that destroy the earth!--The "good sports" of war!--The wasters of the world! Man's favourite sport is war!

ARE YOU A GOOD SPORT?--THE DEVIL WAS THE FIRST GOOD SPORT! He brought competition into the Garden of Eden. Cain was the first to exercise his physical prowess in the good sport of killing his fellow man, his own brother. Murder became the world's favourite sport!--So much so that God had to wipe out their little games with a flood!--Whereupon Noah had to take to yachting to save his life!

ABRAHAM DIDN'T CARE FOR SPORTS. He preferred to separate his and Lot's herdsmen to avoid the fights. When Jacob tried his hand at wrestling with God, he wound up a cripple for the rest of his life and never tried it again. Joseph's brothers thought it great sport to toss him in a pit to become the slave of his enemies. Moses engaged in a little sportful slaying of Egyptians and had to run for his life.

THE GIANT CHAMPION GOLIATH THOUGHT IT GREAT SPORT to challenge God's children to kill him, so little David satisfied him with a rock concert that ended his sporting career, and he lost the championship. Solomon, a man of wisdom and peace found it even safer to sport with his wives than to wage war. Make love, not war! The Romans thought it great sport to mock Jesus, and wound up crucifying the Saviour of the poor, the Prince of Peace, who never hurt anybody but the moneychangers! But that one little episode of beating the businessmen at their own game helped to end His earthly career!

PAUL MADE GREAT SPORT OF TORMENTING CHRISTIANS, until God changed this sports enthusiast into a religious fanatic whom all his old sporting friends wanted to kill. His followers made great sport for the Roman games, with the Christians versus the Lions, and the gory score enlightened by burning human torches as the stakes. The world's sports fans have had the Christians on the run ever since, the Warmongers versus the Peacemakers.

BUT GOD SAYS "BLESSED ARE THE PEACEMAKERS, for they shall be called the children of God." God himself is soon going to bring an end to this World Series of man's favourite sport, war! With one final knockout blow that will Kay-O His opponents for good, He'll win the title of Universal Champion of Everlasting Peace, ending forever all competition and putting a permanent end to the games of his enemies! He'll create a heaven on earth wherein dwelleth righteousness without contest, and the meek shall inherit the earth. For blessed are the poor in spirit, for theirs is the Kingdom of Heaven.

ARE YOU A GOOD SPORT?--OR A PEACEMAKER? Blessed are the peacemakers, for they shall be called the Children of God. For we wrestle not against flesh and blood, but against principalities, against powers, against the rulers of the darkness of this world, against spiritual wickedness in high places. For God hath chosen the weak things of the world to confound the things which are mighty, that no flesh should glory in His presence. For bodily exercise profiteth little: but godliness is profitable unto all things, having promise of the life that now is, and of that which is to come. Exercise thyself rather unto Godliness. (Matthew 5; Ephesians 6:12; 1Corinthians 1:27, 29; 1Timothy 4:7, 8).

ARE YOU A "GOOD SPORT"? If NOT join the peacemakers--The Children of God! Come and See!