The Land of Not Too Much! 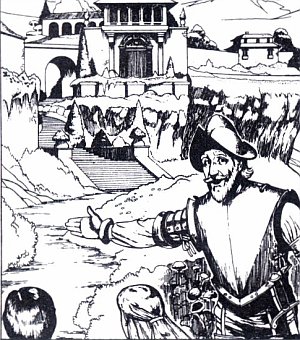 IT WAS THE STRANGEST LITTLE DREAM--there wasn't very much to it. I went over these mountains toward the sea, and it was like paradise, going into another world, and I came back and told you about it, how wonderful it was!

THERE WAS LOTS OF PEACE and PLENTY and SAFETY and HAPPINESS, BUT NOT TOO MUCH, just ENOUGH for everybody. Everybody had enough to eat and to drink, enough to wear, but not too much. Nobody had too much. The women were very pretty, but they didn't wear too many clothes like they do now. In fact they wore very little but enough--just not TOO much.

EVERYTHING WAS SOLVED BY NOT TOO MUCH. So I guess you'd call it "The Land of Not Too Much" where everybody was content with not too much.

It just seemed to solve EVERYTHING. Nobody was too good or too bad or too proud or too mean or too much of anything. You couldn't do too much or anything like that--it was just impossible. Isn't that funny?

ISN'T THAT A FUNNY DREAM? It was so real to me and I was so excited about it and I was telling you all about it.

Lorae Davis (Cairns, Australia) says...
In 1976 in Melbourne some guy was handing out pamphlets and I was given this story. I have never forgotten it. I am 64 now and quoted it often over my life.
This morning my daughter was exhausted from exercise and was hallucinating due to fluid loss..and I said she did too much. Quoted this story and how I was given a single piece of paper 44 years ago. She said why don’t you google it. I did. I found it. It made me cry to see it again. It has been my mantra for all this time.
Admin:
Lorae, I am glad you found that tract you received so long ago on this website! God is good.

Blessings to you from the island of Guam just north of you.