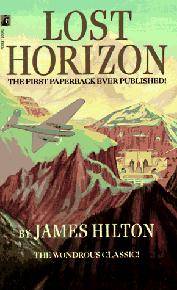 "LOOK AT THE WORLD TODAY. Is there anything more pitiful? What madness there is. What blindness. What unintelligent leadership. A furiously racing mass of bewildered humanity, strengthening, not in wisdom but in vulgar passions, crashing headlong into each other, motivated by greed and propelled into brutality. The time must come when evil will destroy itself.

"WHEN THE DAY COMES THAT THE WORLD BEGINS TO LOOK FOR A NEW LIFE, it is our hope they may find it here in Shangri-La. Here we shall be with our way of life based on one simple rule--love. And it is our hope that Shangri-La's brotherly love will then spread throughout the world. And when the strong have devoured each other, then at last the meek shall inherit the Earth."

BECAUSE THE DRAMA AND THE SENTIMENT OF "LOST HORIZON" IS SO ACUTELY KEYED TO TODAY, producer Ross Hunter has brought it to the screen as a modernized musical drama for Columbia Pictures.

ONE OF THE MOST TALKED ABOUT MOTION PICTURES of the 1973 film season, "Lost Horizon" was directed by Charles Jarrott with Jacque Mapes as associate producer and with music by Burt Bacharach and Hal David. An all-star cast of international screen personalities includes Peter Finch, Liv Ullmann, Sally Kellerman, George Kennedy, Michael York, Olivia Hussey, Bobby Van, James Shigeta, Charles Boyer as the High Lama and John Gielgud as Chang.

AS MODERNIZED BY LARRY KRAMER FROM THE HILTON NOVEL, "Lost Horizon" tells the dramatic adventures of a noted British diplomat who attempts to evacuate a small group of people from a revolution in Southern Asia and unwittingly leads them into a kidnapping, a plane crash and a trek through storm-swept Himalayan mountains to the mystical, magical Valley of the Blue Moon and the lamasery of Shangri-La, where the art, the culture and the accumulated knowledge of the world are treasured against the day when an all-out war will destroy civilization. The clash of the severe ethnology of the outer world with the serene life style of Shangri-La is a key factor in the drama that unfolds.--So says the beautiful brochure on "Lost Horizon."

BUT IT IS THE DEEPER SPIRITUAL SIGNIFICANCE of the film that is really most important: Its mountain valley of Shangri-La, a beautiful Paradise Lost in fancy amongst the tops of the distant and nearly impregnable Himalayas, is really the spiritual haven sought by every heart that longs for truth, beauty, peace, love and eternal contentment!

IT IS GUARDED BY AN ALMOST IMPASSABLE BARRIER of ice and snow and seemingly limitless distances in total isolation from the outside world. It is a Heavenly refuge of the soul from the horrors and torments, confusions and violence of modern man's present-day hell on earth! Only the most persevering that seek it find it at great cost and personal sacrifice, and they must forsake all and leave the world behind them in order to enter in through its narrow protected passageway in order to view its Heavenly delights, join its beautiful people and enjoy its Utopian pleasures of loving kindness and everlasting happiness! Its material golden treasures and abundance, idyllic vistas and lovely temples are even surpassed by its dream-like atmosphere, Heavenly climate, peaceful serenity, mental security and restful, spiritual immortality!

BUT AS WITH SO MANY PARADISES, THERE ARE ALWAYS SOME WHO ARE NOT CONTENT WITH HEAVENLY BLISS, BUT STILL PREFER THE MADNESS OF AN EARTHLY HELL and are never satisfied. The wicked are like the troubled sea when it cannot rest! There is no rest, saith my God, to the wicked! They would even be uncomfortable, unhappy, discontented and restless in Heaven itself, and would be utterly miserable if compelled to live in the midst of such perfection. The just can't stand it! They that love death prefer the destruction of confusion forever and are always happier in a hell of vanities and war! Not all would be happy in Heaven--most people seem to prefer hell!--And so it is with Shangri-La and every earthly Utopia!

THE TWO MOST BEAUTIFUL PEOPLE EVER CREATED IN THE MOST BEAUTIFUL PLACE EVER MADE LIVING IN THE MOST IDEAL CONDITIONS THAT EVER EXISTED WERE STILL NOT SATISFIED NOR COMPLETELY HAPPY WITHOUT HEAVENLY HEARTS!--Adam and Eve in the Garden of Eden before the Fall of man! If you were to drag that heavy wicked heart of yours and your unregenerate evil carnal spirit into the halls of Heaven itself, you would be even more miserable in its exposure to the Light of God's Truth and the glory of His presence! Hell is for the hellish!--Heaven is only for the Heavenly minded and the spiritually perfected!--And never the twain shall meet! In fact, the hellish hate the Heavenly, and violently persecute them with a vengeance on Earth!

LET MERCY BE SHOWN UNTO THE WICKED AND YET HE WILL NOT LEARN righteousness! Should the wicked mistakenly arrive in any Heaven, they would soon know they didn't belong and would do everything they could to get out and take others with them, even if it means death and destruction! And so it is with every Shangri-La! Without a change of heart and a rebirth of your spirit you would never be happy there, or the carnal mind is at enmity with God, and he that loveth the world--this earthly, hellish System--the love of the Father is not in him!

AS JESUS SAID TO HIS OWN DISCIPLES, YE ARE IN THE WORLD BUT NOT OF THE WORLD, THEREFORE THE WORLD HATETH YOU. If ye were of the world, the world would love its own. No wonder the Children of God can see so many parallels to themselves in these recent inspired films! In the "Man of La Mancha" the well meaning mad Don Quixote expects and accomplishes the impossible, like their own crazily crusading leader, Moses David! In "Brother Sun, Sister Moon" they can easily see themselves in the pitiful self-denying and persecuted followers of St. Francis, sharing similar experiences. In "Pope Joan" they see one of their flaming female young leaders like Faith leading the hungry hippie-like dropouts of Rome!

THE DISASTROUS FATE OF SHANGRI-LA'S DESERTERS could be compared to some of our own, and the final warning message of the judgements of God on a wicked world in the end where the strong shall destroy the strong and only the meek inherit the earth, gives promise of a new world rising from the ruins of the old through the message of peace and love and the preservation of life and truth in the isolated Colonies of these pioneers of the spirit!--Our Lost Horizon Found! Long live Shangri-La!


Did you like this article? Please tell me about it! E-mail: webmaster@deeptruths.com
Back to Home of Deep Truths