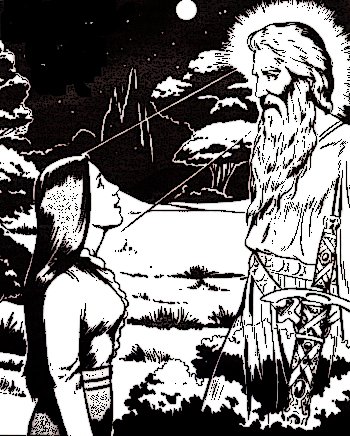 GOD SIMPLY SAYS IN THE BIBLE THAT HE ANSWERS YOUR PRAYERS, because if He had tried to explain prayer scientifically all these years people never would have understood. If He had said the sun doesn't really rise but the Earth is revolving on its axis, they wouldn't have understood! He answers your prayers, He translates those prayers, He amplifies their power and the desire of that prayer to influence the person you're praying for.--You have actual influence on them through your prayers.

THE SPIRITUAL POWER OF GOD WORKS FOR YOU, and you, in a sense when you're empowered by the Spirit, are used by God's Spirit. You use His Spirit to communicate, to pray, to edify, to receive information from His broadcasting station, sort of mutual use.

YOU AND GOD ARE USING EACH OTHER JUST LIKE TWO PEOPLE WHO LOVE EACH OTHER! It's a two-way street. You're both giving and are receiving at the same time, like a transceiver that both transmits and receives. I like to dwell on that which is good. Your prayer actually is an influence in itself, it has power. It does things because God lets it, or empowers it to do so. God empowers it to take effect.

When you're in tune and praying according to His Will with the right wave length or vibes on the right channel, He receives it and amplifies it and lets it do what you intend for it to do. It's two-way and if you love the Lord, what you receive from Him is good and ministers faith, joy, hope, love and praise. The vibes you get off the Lord are all good things. But there is a dark side of the picture, sad to say.

IF GOD HAS MEANS OF COMMUNICATION IN THE SPIRIT WORLD, WHAT ABOUT THE DEVIL? Do you think he has?--Of course he does. Does he have children? Just like God has His Children, the Devil has his captives, and he has his means of communication.

JUST LIKE GOD'S SPIRIT CAN POSSESS US, THE DEVIL'S SPIRIT CAN POSSESS HIS CHILDREN! And therefore, so-called witchcraft, demonology, etc., is a reality in the world of the evil spirits of the Enemy. God's children can pray to the Lord and ask Him to answer and affect certain people for good, and so can the Devil's children communicate with him and project. God has given the Devil certain powers, particularly over his children, those that aren't protected by the Spirit of God, those who have rejected Christ.

THE LORD GIVES PEOPLE A CERTAIN IMMUNITY TO THE INFLUENCE OF SATAN up to the point of decision. "He that being often reproved and hardeneth his neck shall suddenly be destroyed!" Every time they resist the truth they are hardening their spirit against the Lord, and therefore, if we reject the truth we receive strong delusion that we may believe a lie.--Those who are the Devil's children, at least. Until someone reaches that point and if he's not made the final decision, as long as God's Spirit is still dealing with him, he still has a certain immunity or merciful protection.

GOD'S SPIRIT PROTECTS AND OVERSHADOWS THE LITTLE CHILDREN until they have made their choice or come to the age of accountability, unless they are the children of unclean parents. God still protects the child but God can let things happen to the children as a punishment to the parents. The Lord's child, if he's in the spirit, will be in tune with His protective power and under the shelter of His wings.

WE PRAY IN THE SPIRIT AND OUR PRAYERS HAVE MORE EFFECT BECAUSE WE PRAY BY THE SPIRIT HIMSELF, by His power, which is exactly what God wants in His Will in His own Spirit. In a sense, we become almost like the reflectors ourselves, and God is issuing the influence and God Himself gets the desired effect.

BUT THE ENEMY, OF COURSE, HAS HIS POWER AND COMMUNICATION WITH HIS CHILDREN and they with him. And if they're his child he can answer their prayers within certain God given limitations. Especially if it is a child of the Devil praying to the Devil for or against another child of the Devil. That's his realm, his kingdom. That's where he's allowed to operate, control and influence, and be influenced by and controlled by, in a sense, his children, children of the Devil, just like God is by His Children.

WHAT ABOUT THE CASES OF SO CALLED WITCHCRAFT, WIZARDRY, BLACK MAGIC, casting of so-called spells upon people, the influencing of people from a distance sometimes called telepathic hypnosis? In that case, the Enemy acts as a relay station, and his spiritual power amplifies and transmits the message. Satan's child communicates with the Devil and if it's in accordance with the Devil's will, and not beyond the powers God has given him, then he can operate to influence other children of the Devil, one way or the other. Science, of course, would call this telepathic hypnosis. They have already proven the influence and results of personal hypnosis, face-to-face hypnosis in the presence of the hypnotist, and are now having to consider even further the possibilities of the power of suggestion, that if it can be done face-to-face, why can't it be done at a longer distance.

THE LORD'S PROTECTION IS JUST LIKE A FORCE FIELD AROUND US AND THE ENEMY CANNOT PENETRATE IT! It's impossible for him to penetrate it unless the Lord allows him to do it as a spanking, as a chastening, as a reaping of something you have done that you haven't confessed or you're not sorry for. The Lord allows you to reap the results.

Science is really studying E.S.P., telepathic communication and telepathic hypnosis in certain universities now because there are so many proved instances of E.S.P.--People suddenly waking the moment a friend or loved one died and knowing that they're dead and so on. E.S.P. means Extra Sensory Perception.

It's all very real and science is beginning to recognize it more and more all the time. They can no longer deny that these things exist. They've been proven by actual experience and experimentation; they know they're real beyond a shadow of a doubt.

So whether they know it or not, they are using the power of the spirit. And if they don't have the Lord in their heart, it has to be the Devil no matter what good they are trying to do. There are literal spiritual forces behind the scenes with which they're dealing, and in so doing they're really playing with fire! They're really taking chances because they're not necessarily protected by the Lord. But if you're a child of God, none of these things can touch you!

How wonderful it is if you have faith and you're the Lord's child! You see the good and you feel good and you praise the Lord and are thankful. You're on His channel and you're getting His vibes all the time. You're constantly hearing from Him and you're hearing His voice all the time in the mind's eye, your spirit. All day long and even at night in your sleep you're receiving the Lord's communication.

If you're in the Lord, then you're His child, and you don't have anything to worry about.--You shouldn't fear, you shouldn't worry. You know the Lord's protecting you, He keeps you, He hallows you round about and gives His angels charge over you.

Thank You, Lord, that you have not given us the spirit of fear, but of power, love and a sound mind. Thou shalt keep him in perfect peace whose mind is stayed on Thee, because he trusteth in Thee, for perfect love casts out all fear, and greater is He that is in us, Lord, than he that is in the World. All we have to do is resist the Enemy and he will flee from us, Lord!

Help Thy children not to fear, Lord, not to worry, not to talk about the Devil or his power more than absolutely necessary. Teach Thy children and warn them to stay close to You, Lord, and in Your realm of protection.

We rest in You, Lord, we sleep in Thee, in the hollow of Thy arms, Thy hands, under Thy wings, Thy secret place. We abide under the shadow of the Almighty. It's like Your special force field around us, Lord, like an aura, a special kind of glory that protects us. We thank You for how You keep us and protect us!

May God help you to have good spiritual communication with Him and each other! May He help you to get your signals straight and not get your wires crossed! If you stay close to Him and each other, you will! If you stay in His Will and obey, you'll have a strong, clear channel and really get the picture tuned in loud and clear!--Amen? God bless and keep you in good spiritual communication with Him and us!--Don't get excommunicated!

Sam says...
Hi, In another teaching re hearing from God it was expressed that we should take the first answer as from God. I feel more than a little cautious about this. What is to stop the devil offering an answer first and thus we need to "test the spirits." There were no scripture examples given to show we should take the first answer that comes. Your thoughts/and scriptures please. Thanks Sam.
Admin:
Hello Sam,
The scripture example that comes to mind are the first 4 recorded words  that Satan spoke to Eve. "Yea, hath God said....? " (Genesis 3:1)
God spoke first, after that the Devil.

Did this page make you glad? Please tell me about it! E-mail: webmaster@deeptruths.com