"Who are the Racists?" 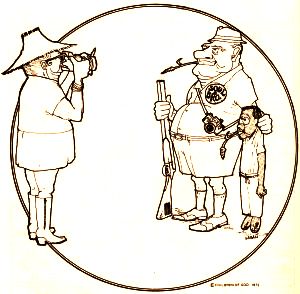 WHAT HAVE THE WORLD'S WHITES GOT TO BE PROUD OF! They have nearly wrecked the world! When the dark-skinned Romans of Southern Europe first came in contact with the Whites of Northern Europe, they thought them so beautiful because of their white skins and golden hair, that they called them angels, from which we get our term "Anglos" such as "Anglo-Saxons"--but they soon found out that they were some of the cruelest barbarians they had ever run into, who burned and pillaged and sacked and tortured the much more refined and darker-skinned civilisations of Southern Europe! It was these White Devil's Angels who invaded, and all but destroyed the much more learned religious, philosophical and peaceful civilisations of Southern Europe, the Near East, the Far East, and around the globe with their predatory, warlike brutality!

THESE WHITE DEVILS EXPLOITED, ENSLAVED, SUPPRESSED, OPPRESSED, TORTURED, and built massive, rich, and warring empires upon the bruised and bloody bodies of these down-trodden masses of so-called under-developed peoples! Under developed in what? Under-developed in war, weapons, brutality, cruelty, selfishness, and the desire to dominate others! Actually they were over- developed in some of the world's most beautiful and peaceful cultures-- religions, art, sciences, philosophies, and beautiful, peaceful, pastoral ways of life, which the White Devils came to destroy, and to makes slaves of them.

THE WORLD'S FIRST GREAT CIVILISATION WAS BLACK--Egypt, the world's first great power--the Sons of Ham in the Land of Ham--and from the sounds of the prophecies, She will be its last--a final great Black Power will rule the world--and the world will go back into the dark-skinned hands of those who originally ruled it, like the early great and the colourful empires who dominated the East before the rise of the White Man. For it was not until East met West in Europe, that the White Man rose to power, as God used these barbaric Whites to destroy the corrupt civilisations of the ancient past for their sins. The Goths, VisiGoths, Huns, Vandals, and Anglo-Saxons of Northern Europe then rose to power on the smoking ruins of the fallen Roman Empire!

BUT IT WAS STILL LEFT TO THEIR DARKER SKINNED BRETHREN, the Italians, Spanish, and Portuguese, to pioneer the exploration of a new world--the Western Hemisphere, with the blood of Moors and Nubians flowing in their veins and pigmenting their skins! But then came the Whites again--the French and the English with their superior brutality, war machines, and desire to dominate and to rule that which others had discovered! The truly Christian religious communities of early White Colonists made peace with the Indians, their copper skinned brothers, who even kept them from starving in time of need--but the typically commercially-minded greedy and unscrupulous exploitational Colonies of big business, such as Massachusetts Bay Colony, Hudson's Bay Colony, Jamestown, etc., immediately declared war on these peace-loving and normally kind and thoughtful, pastoral, and woodland natives, calling them savages and heathen, and endeavoured to drive them out of their own homes, villages, and woodlands, and tried to exterminate them! Most of America was stolen from these poor, surprised, and outnumbered Indians, by the brute force, greed, and trickery of these supposedly superior White Men!

I ONCE WROTE A THESIS ON THE HISTORY OF THE AMERICAN INDIAN and his unsuccessful struggle to protect his homeland from these rampaging whites, and it is one of the most horrible, heinous, and terrible chapters in the whole sordid story of the U.S.A.!

I COULD NOT POSSIBLY TELL YOU HOW SHOCKED I WAS, AS I BEGAN TO LEARN THE REAL TRUTH ABOUT AMERICAN HISTORY--a history of slaughter, carnage, brutality, torture, greed, lies, trickery, and broken promises used to steal the Indian's land and exterminate his people! It is almost unbelievable--this sophisticated savagery of the Whites! It is just now beginning to come to light, and the true story is beginning to be told, as the few poor Indians who are left--it would shame them even to call them the first Americans--as they are unworthy of such an insulting name!--As these few poor down-trodden original natives of this land begin to arise and demand their rights and reparations!

FOR EXAMPLE, DID YOU KNOW THAT THE SEMINOLES WERE NOT ORIGINALLY FROM FLORIDA, but rather are the pitiful remnant of one of the most powerful Indian Nations in this land before the White Man came, but were pushed into Florida by the White Man's atrocities and broken promises, where they were promised a permanent home. This promise, too, was soon broken! As soon as the White Man wanted Florida, he began to drive the Indians out, and to slaughter those who refused to move. Their great chief, Osceola, tried to make peace with the savage Whites, only to find that they always lied, and seldom kept their word, and even threw him into a dark dungeon when he came under a flag of truce to talk terms of peace! By nearly starving himself to death, he became so thin that he managed to slip through the bars of his cell and escape, never to try to make peace again, but determined to wage a relentless, but hopeless, defensive warfare against the encroaching Whites! Finally, the pitiful remnant of his people, tired of warfare, were promised a beautiful, new, green, well -watered, woodsy home, with plenty of game, if they would only gather peacefully at Tampa and be shipped by boat to this gorgeous new reservation. Thousands of them agreed and turned themselves in, but only too late did they discover after a long and tortuous journey, that they were being dumped in the middle of the Arizona and New Mexican deserts, with no grass, no water, no woods, and no food!--And left there to die, both men, women, and children! It was only a miracle of God that some of them ever survived! And it is no wonder that those yet remaining in the jungles and Everglades of Florida still refuse to sign a peace treaty with the U.S. terrorists!

AND HOW MANY OF YOU HAVE EVER HEARD THE TRUE STORY OF CUSTER'S LAST STAND, and why God let it be his last stand, and the massacre of all his men! You probably didn't know that the Federal troops had just finished massacring and murdering a lot of Indian men, women and children in their peaceful village, because they refused to move from the reservation the U.S. terrorist government had promised them, after having been pushed as far west as South Dakota! When the White thieves and robbers discovered there was gold in them thar hills, they didn't hesitate to try to run the Indians out of the reservation they had just given them, shooting slaughtering, pillaging, raping, and burning their villages! And to show you the unscrupulousness of these White invaders, they even called for Federal troops to help them run the Indians off the Indians' own land, which the American government had promised to the Indians, and had signed a treaty to that effect!--Which the American terrorist did not hesitate to break, and sent Custer to do the dirty work!--Only the Indians got to him first! But this pitiful little show of resistance actually became the Indians' Last Stand, as they were then slaughtered and driven into the deserts by even more Federal troops!

SUCH IS THE BEAUTIFUL HISTORY OF THE WHITE MAN!--And I could tell you many more!--Of the wars that the British fought to protect their opium trade, their drug trade, illegal drug traffic with the Chinese who were trying to stamp out drug addiction.--But England actually fought a war to protect this profitable, illegal, drug traffic with the Chinese!--Or I could tell you how the Belgians chopped off the hands of their slave labourers in the Congo, if they did not gather enough rubber!--Or how the Dutch imported the first slaves to America!--Or how the French slaughtered the Vietnamese for 20 years before we got there, and how the Americans have been slaughtering them for 20 years since!--Or how the Germans started the world's two greatest wars, which slaughtered millions!--And so on and so on! And it is the White Man--Americans at that--who were the first to use the nightmarish atomic bomb on whole populations of civilians in crowded cities, killing and horribly maiming tens of thousands of defenseless men, women, and children, old and young! And it is the White Man who still holds this fiendish bomb in his hands, threatening to send the whole world to Perdition, if it does not obey his will!

IT SHOULD MAKE ONE ASHAMED TO BE WHITE, if it were not for the fact that where iniquity doth abound, Grace doth much more abound, and God in His mercy has turned around and used White Men and Women to become most of the world's missionaries, to carry the Gospel to the very people their own evil White countrymen had plundered and oppressed and exploited! But in many instances, even the Church and its missions became just another tool to insure White domination, spiritually as well as politically and economically! So it's no wonder that the rest of the world doesn't think much of the White Man!--He has a long, sad, gruesome, gory, and horrible history! But his day is coming! God's Rod is poised for the strike, and His Judgements are about to fall, and the White powers of the Western World are about to collapse under a rising Red tide of colour!--The vast majority of the world's populations who are poor, starving, sick, oppressed, exploited, misused, insulted, injured, incensed, and fed up with it!

To read more about the American Indians, please check out www.indians.org

Akwolf (Brainerd, US) says...
You have some interesting content however I've read history act where the dark skinned ppl enslaved light skinned people also...none.of it is right and God hates it.
Your article, maybe we'll intended , does not promote peace but causes more.division...