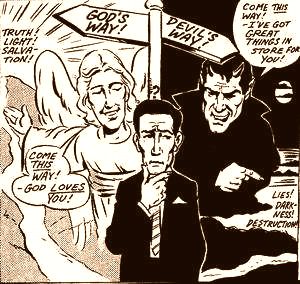 IN THIS AGE OF GRACE, FREE WILL and CHOICE, GOD WON'T FORCE YOU TO DO HIS WILL. The only thing He can do is wipe you out! He can stop you, kill you if you go too far, but the rules of the game now are, He won't make you be good. He can limit you in some way, He's got the power. But my mother used to preach a sermon called,

"WHY DIDN'T GOD STOP HITLER?" - And do you know what the answer was? If God had stepped in and intervened and stopped Hitler, He would have had to stop every sinner in the World from doing his sin and wickedness! He would have had to interfere with the power of choice and the free will of man and man's choice in determining his own fate.--And He's not going to do that until the Millennium!--Maybe not even then! (Rev.20:8-9)

HE WOULD'VE HAD TO STOP ADAM and EVE IN THE GARDEN and not just forbidden them to eat from the tree of the knowledge of Good and Evil or merely warn them not to eat of it, but He would've had to forcibly prevent them from eating of it! But in order for them to have free will and choice, to demonstrate what would happen if man could have his own way and choose to do evil, for the whole plan of God to succeed in showing the awful consequences of evil and the blessings of doing good, He had to let them go ahead and have their own way. He's let man go ahead and have his own way and do as he pleases ever since, in order to especially save and bless those who voluntarily choose to love and serve Him forever!

IT'S A GIGANTIC LESSON, ESPECIALLY TO THE WHOLE WORLD and TO THE ENTIRE UNIVERSE OF MEN and ANGELS (and God knows what other creations throughout space!), to let the Earth be an example of what rebellion against God is like and what a mess man and angels can make of themselves and His creation if they do not follow God's laws and obey God, but defy Him!

SO TO MAKE THAT GREAT DEMONSTRATION AN ENORMOUS EXAMPLE and WORK, HE'S GOT TO LET THEM HAVE THEIR OWN WAY and DO AS THEY PLEASE, within certain limits. Once in awhile He will step in and stop'm when they have gone too far and their cup of iniquity is full and God's had enough. During this age of free choice He doesn't force them, He doesn't make them do right or compel'm to be righteous, He just slaughters them, kills them if they go too far! The only way He can stop a rebel is kill him, and then he probably goes to work for the Devil on the other side! Ha! His forces are full of evil spirits, he's probably running Hell with'm like God runs Heaven with saints and angels!--How about you?--Whose side are you on?

The Lord had to let Adam and Eve fall in the Garden and let them eat of the Tree of the Knowledge of Good and Evil, so they would know the difference. They had all the good, but they may not have understood what good was, and how good it was, because they didn't have anything to compare it with, it was all good. They never really appreciated the Garden until they lost it.

There has to be a little evil and a little bad to make you appreciate the good things. If you didn't have a few troubles you wouldn't thank the Lord for all the good things! If you didn't have problems, you wouldn't appreciate the solutions. He allows the bad or the evil to show you that you never had it so good, and to help you be more thankful for when things are good, and to help you appreciate Himself--the Good of all goods!