A prophetic fictional story based on the teachings of David Brandt Berg. It was written in 1979 and soon to be fulfilled! 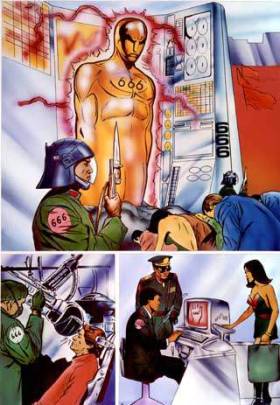 When the Great Economic Crash devastated the World's economy, George and Nancy's lives were drastically changed! The money they'd saved in the bank became worthless overnight and many of their dreams for the future were shattered!

As the banks closed, panic and chaos broke out everywhere! There were no more jobs, no more pay-cheques, no more government welfare, and all businesses, stores and shops closed their doors! After only a few days the military police forces were unable to control the angry and hungry mobs that rioted in the cities, breaking into and emptying the shelves of the supermarkets and food stores!

Nation after nation fell into total anarchy, and tension between the Super Powers reached an all-time high as they accused each other of being behind the turmoil. America and Russia both prepared for a direct military confrontation, and the World came very close to full-scale nuclear war!

So it was not surprising that when a bold 7-year plan for peace was proposed at the United Nations, that it was immediately accepted! A new One-World Government was formed, led by the genius who had drawn up this peace agreement. During the first 3-1/2 years of his rule, peace and stability returned to most countries.

But 3-1/2 years after coming into power, this leader of the One-World Government suddenly broke his peace pact, invaded Israel, erected a computerised Image or Idol of himself at the Jews' new Temple in Jerusalem and proclaimed that he himself was God!--And that all the World must now worship him and receive his credit mark or number in their foreheads or hands in order to buy or sell!

Although it seemed strange to George and Nancy that this World leader insisted that he was God and that they must worship him in order to receive their credit number, they figured, "Well, maybe he is God!"--The way he saved the World and restored peace and order was miraculous! The fact that this World leader opposed and spoke against the God of the Bible didn't bother George or Nancy.--They'd always been too busy with other things to care much about "religion" anyway.

So they decided, "Yes, we will worship this wonderful leader as God, as our saviour! We'll bow down to his magical Image, his super-computer that speaks and thinks and seems to have a life all its own!" So they received the Mark and number of this World leader.--His number is 666! In the picture we can see George receiving it in his forehead and Nancy buying groceries by showing the Mark in her right hand on the cashier's computerised hand-scanner.

They thought their future was secure and their happiness was guaranteed. Their main source of worry or bother came from scattered Christian prophets who fearlessly stood up, warning the undecided not to receive the Mark of the World leader and proclaiming God's judgements against all who do!--George and Nancy despised these "religious fanatics" and were always glad when they heard some of them were captured and executed!

So it was a real shock to them when a series of great plagues and disasters came upon them and their country!--Drought, burning heat and darkness, and swarms of locust-like creatures that stung like scorpions, tormenting and terrorizing!--Then Atomic War!

But the greatest shock of all came one afternoon while they were terrified!: The day grew very dark and still! Everyone in the bomb shelters went to the doors, looking up into the black sky to try to see what had happened!--Suddenly the darkness was pierced by a blinding flash of light which lit up the entire sky!--The stillness was shattered by a thunderous trumpet-like sound and booming voices and shouts from above!--Then the figure of a Man could be seen in the clouds!

The Earth itself suddenly rumbled and shook, and to George and Nancy's horror and astonishment, thousands of bodies began rising up out of the Earth! On the streets below, in the midst of the panic and terror they noticed a few people who were looking up with joy and expectation on their faces.--These folks then began rising, floating up into the sky with all of those who had risen from their graves in the Earth!--Rising up together to meet the One Who had come for them in the clouds!--JESUS!

Then they all vanished!--And the worst, most horrible plagues that the World had ever known fell upon George and Nancy and all those who had served and worshipped the World leader!--Sores, water turned to blood, scorching fire, darkness and a terrible slaughter in a great battle known as "Armageddon!"--In which George and Nancy both die and go to Hell!

The Bible tells us that these future events will all be fulfilled very soon!--In fact, the One-World Government of the Devil-possessed Dictator known as the Antichrist is rising right now! 3-1/2 years after his peace plan is accepted he will set up his magical talking Image in Jerusalem and demand that all receive his Mark or number in their foreheads or hands and that the World worship him as God! (See Revelation 13!)

Exactly 1260 days from the time that his Image is set up, Jesus Christ will return, "In the clouds of Heaven with power and great glory!" (Rev.11:3,12; Mt.24:29-31).--To rescue His saved children, judge and destroy the Antichrist and his followers and to personally take over this World!

Will you meet the same sad fate as George and Nancy in this story?--Or will you refuse to accept the Antichrist's number because you belong to Jesus, the Son of God!

The time to get ready for these events is now and the way to get ready is to receive Jesus personally into your own heart!

Simply pray: "Dear Jesus, I believe that You are the Son of God and that You died for me. Please forgive me for all my sins. I now open the door of my heart and I ask You, Jesus, to please come in and give me Your free Gift of Eternal Life! Help me to love You and others by telling them about You. In Jesus' name I pray. Amen."