There is No Limit!

Compiled from the writings of David Brandt Berg
Moody had no more than a 5th-6th grade education and did poorly even at that. When he attended his first Sunday School class, he thumbed through Genesis looking for John. When applying to join Mt. Vernon Congregational Church, he was rejected because of his utter ignorance of Christian teaching. His friends thought that seldom was anyone seen more unlikely to fill any sphere of public or extended usefulness. But God can take what seems small and insignificant and use it greatly, if it is given over completely to Him. 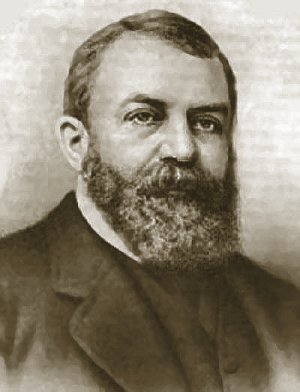 At the age of 17, Dwight L. Moody left his poor widowed mother's farm to set out on his own in the big city of Boston, where he began working in his uncle's shoe store as a clerk. The year was 1854. Then one day, the most significant event that ever happened in his entire life took place:

Edward Kimball, a dedicated Christian who had met young Dwight when he first came to the city, felt that he needed to witness to him and tell him about Jesus and God's plan of Salvation. So Kimball went to the store where Moody worked, and finding him in the back room wrapping shoes, told him how he could receive Jesus as his personal Saviour. Moody listened attentively and prayed with him to receive Jesus on the spot!

Shortly afterwards, Kimball challenged his young new convert with these stirring words: "Dwight L. Moody, there is no limit to what God can do with a man who is YIELDED and WILLING to do His will!" Moody looked him in the eye and replied, "By the grace of God, Edward, I am DETERMINED to be that man!"--And he WAS! A short while later he moved to Chicago where he began preaching the Gospel and witnessing to others, and was soon so thrilled to be able to lead other folks to Jesus, that he quit the shoe business and began serving the Lord fulltime! He went on to become one of the World's greatest evangelists, with literally tens of thousands of eternal souls won as a result!

But what if Moody had NOT determined to yield to the Lord?--What a sad loss it would have been not only to himself, but to literally MILLIONS who heard the Gospel through his ministry! Well, the same holds true for each of US: If we are not yielded and open to God's will in our lives, and willing to do WHATEVER He may ask of us, we'll NEVER become what God wants us to be!--And if we're not what HE wants us to BE, we will never be able to ACCOMPLISH what He wants us to DO.--Which could be very sad, not only for US personally, but also for all those that the Lord wants us to somehow help or reach with His Love.

"But," you may object, "I could never do anything great for the Lord like MOODY did!--I'm no great evangelist or soul-winner!" Well, neither was Moody to begin with! He was just a poor farm boy and a belowaverage student who became bored with life on the farm and so moved to the big city. After several weeks in the city, he set a new goal for himself--to become a big businessman and to make $100,000. Giving his life to God's service was the LAST thing on his mind!

But when he received Jesus as his Saviour, and he knew how much the LORD had given for HIM, then he determined to give HIS life to the LORD. "How do I give my life to Jesus?" you may ask. Well, the first step is to make sure you have asked Him into your heart. Then you need to YIELD yourself to Him and, as the Bible says, "Draw close to GOD, then HE will draw close to YOU." (James 4:8) This is the secret of success of EVERY great man or woman of God whom He has ever used: They drew close to the Lord and relied solely upon HIM and HIS power and His Word for guidance, strength and inspiration.

God's Word tells us, "Present your body as a LIVING SACRIFICE, holy and acceptable unto God, for this is your REASONABLE service. And do NOT CONFORM yourself to THIS World, but be TRANSFORMED by the RENEWING of your MIND. THEN you will KNOW what is the good and pleasing and perfect will of God!" (Romans 12:1,2) When we really submit ourselves to the Lord and yield ourselves to Him for His service, THEN we'll know His Will for our lives!

Despite all of our faults, weaknesses and inabilities, there really is NO LIMIT to what God can do with us if we will simply turn our lives completely over to Him and be willing to let Him make us what HE wants us to be! Of course, that is a very BIG "IF", because we each have our own free will, and we can CHOOSE to either yield to Him and "seek FIRST the KINGDOM OF GOD" (Matthew 6:33), or we can seek first our OWN desires and our OWN plans and our OWN ways. The choice is ours--and whether or not we have His full blessing and His help will depend on whether or not we are willing to give HIM first place in our lives.,

One thing that many folks don't seem to understand is that when the Bible speaks about "Seeking first the Kingdom of God", it's not merely talking about the "RELIGIOUS" part of our lives. The Lord is talking about our ENTIRE life, our FUTURE, our PLANS, what we actually DO with ourselves. It is not enough for us to say, "Yes, Lord, I know that I need to be yielded to You, so I will spend a certain amount of time every day reading Your Word and praying.--BUT, Lord, I really must proceed with MY plans to do thus and thus with my career, or to do this or that with my future, etc.!" To turn our lives over to the Lord--to really present ourselves as LIVING SACRIFICES upon His altar--means that we put our will, our plans, our future, our desires, our ambitions--EVERYTHING--completely in the LORD'S hands. We know that His Kingdom is made of SOULS, and that He wants us to "preach the Gospel to EVERY creature" in order to win as many souls as we can. (Mark 16:15) So to be yielded to His will is to be willing to do whatever we can to reach OTHERS with His Word and His Love. To give ourselves to Him like this, He says, is only our "REASONABLE SERVICE".--It's the LEAST we can do for Jesus, considering what HE has done for US. (Romans 12:1)

So are you willing, not to present YOUR program to God for HIS signature?--Not even to be presented with GOD'S program for YOUR signature, but are you willing to sign a BLANK SHEET OF PAPER and let GOD fill it in without your even knowing in advance what His program is going to be? Think about it. Are you willing to honestly and sincerely turn your life over to Him and then do WHATEVER He wants you to do? If so, God has a WONDERFUL and GLORIOUS future in store for you!

You can be sure that once you yield your life to the Lord, He will bless and use you as much as He can! Of course, not everybody is called to be a D.L. Moody, or an Apostle Paul. But God has a special calling and place in His Kingdom for each of us. A thorough reading of the Gospels makes it clear that He calls different people in different ways. Jesus and His fulltime disciples had many FRIENDS who didn't always give up their businesses or their professions, perhaps because they could do more good for the Lord and His work from their positions of influence.

It's a high privilege and a special calling to be one of His fulltime disciples.--Jesus had only 12 to 70 fulltime disciples who were with Him & followed Him around almost continuously. But He also had many thousands of others who received His Words and believed and spread them to others, who were important and necessary friends, helpers and protectors whom God had ORDAINED for such a ministry!


But WHATEVER you do, make sure you do it with the RIGHT MOTIVATION--because you want to serve the LORD and WIN OTHERS into His Kingdom. If you believe that God's highest calling is to, "Go into all the World and preach the Gospel to every creature", and THAT'S what you really want to do--or make it possible for OTHERS to do--then you are "seeking first the Kingdom of GOD", & the Lord will BLESS and be WITH you! "He knows, He loves, He cares,
Nothing His Truth can dim.
He gives the very BEST to those,
Who leave the choices up to HIM!"

Will YOU leave the choices up to HIM? If so, He will mightily bless you beyond your wildest dreams and imagination!--"There is no limit!"

One summer morning a child stood in a great cathedral watching the sunlight stream through the beautiful glass windows. The Bible characters in the windows were bathed with the brillant colours that resulted. When she was asked, "What is a saint?" she replied, "A saint is a person who lets the Light through."

Copyright © 1997 by The Family
Request

Did you like this article? Please tell me about it! E-mail: webmaster@deeptruths.com

[ More Treasures ] [ Back to Home of Deep Truths ]