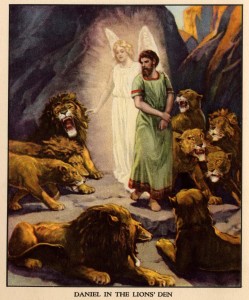 “…an excellent spirit, and knowledge, and understanding, interpreting of dreams, and shewing of hard sentences, and dissolving of doubts, were found in the same Daniel, whom the king named Belteshazzar: now let Daniel be called, and he will shew the interpretation. — Daniel 5:12

Isaiah 34:16  Seek ye out of the book of the LORD, and read: no one of these shall fail, none shall want her mate: for My Mouth it hath commanded, and His Spirit it hath gathered them.

This Bible study is an attempt to compare certain verses in Daniel with Revelation, and by doing so, clearly show what they are teaching in order to shed more light on controversial teachings about the Endtime that have been circulating among the churches, especially American churches!

Who are the “saints”? The born again children of God in Christ Jesus! The “horn” of the book of Daniel is the Antichrist– the Papacy — what all the Protestant reformerers believed about the Roman Pope. The “beast” of Revelation chapter 13 is the Roman Empire including the revived one that continues to this day.

The “ten horns” may be the 10 economic regions of the world today, the regions designated by the World Trade Organization. It’s interesting that Japan is the sole nation of one of those regions. IMHO, I think this could mean that Japan is still capable of surviving economically on its own,

Or the 10 horns may be the way the Jesuits have divided up the world! The image below taken from an official Jesuit website: http://sjweb.info/resources/locatio.cfm Let it pass
Mainstream evangelicals are wrong about predictions of the Rapture
Observations upon the Prophecies of Daniel, by Isaac Newton
Pope Francis: The Vicar of Christ