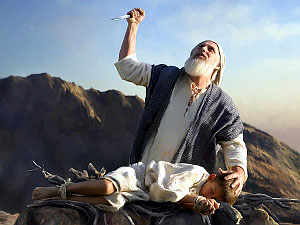 The answer is NO! Not according to the 1611 King James version of the English Bible!

Genesis 22:2  And he said, Take now thy son, thine only son Isaac, whom thou lovest, and get thee into the land of Moriah; and offer him there for a burnt offering upon one of the mountains which I will tell thee of.

The KJV says only to “offer” Isaac as a sacrifice, not to actually do it. Abraham obeyed God and did exactly what He said, He offered Isaac for a burnt offering, for a sacrifice.

Genesis 22:9  And they came to the place which God had told him of; and Abraham built an altar there, and laid the wood in order, and bound Isaac his son, and laid him on the altar upon the wood.

Abraham apparently thought, meaning assumed God meant for him to kill his son also, but that is not exactly what God said. Rather than actually draw a knife on Isaac, He could have told God.

“OK Lord, I offered up Isaac as a sacrifice. Here he is lying tied up on the wood on the altar I made. Now what?”

But according to the New International Version, (NIV), the answer to the question in the title of this article is YES, God commanded Abraham to sacrifice Isaac.

Genesis 22:2 Then God said, “Take your son, your only son, whom you love—Isaac—and go to the region of Moriah. Sacrifice him there as a burnt offering on a mountain I will show you.” New International Version (NIV)

The NIV is the only translation I found so far that actually says to do it, to sacrifice Isaac. The Good News Bible doesn’t say that, not even the RSV says it.

Think this is splitting hairs? Isn’t there a difference between merely offering something as a sacrifice, and actually sacrificing it? I think there is.

I’m writing this because the NIV has surpassed the KJV as the most popular English Bible though it is full of errors!

Examples of errors in the NIV

In Isaiah 14:12, the NIV omits the name Lucifer and refers to him as “morning star” which is a title the Book of Revelation attributes to Jesus Christ!

Revelation 22:16 says that Jesus is the morning star!

Revelation 22:16  I Jesus have sent mine angel to testify unto you these things in the churches. I am the root and the offspring of David, and the bright and morning star. -KJV

The NIV advocates striking your body to hurt it.

1 Corinthians 9:27 No, I strike a blow to my body and make it my slave so that after I have preached to others, I myself will not be disqualified for the prize.

This is what some cloistered Roman Catholic monks do, and what some Islamic people do. They flagellate themselves thinking this will bring them righteousness. Martin Luther, before God’s Word enlightened him about the Grace and Righteousness of Christ, used to also flagellate himself. But does the Bible really tell believers to do that? The same Scripture in the KJV doesn’t say so!

1 Corinthians 9:27  But I keep under my body, and bring it into subjection: lest that by any means, when I have preached to others, I myself should be a castaway. — KJV

I’m grateful to Pastor Mike Hoggard for pointing out the difference between the KJV and NIV in Genesis 22:2 and 1 Corinthians 9:27, and for teaching the importance of the KJV as the only trustworthy translation of God’s Word in the English language.

2 thoughts on “Did God really tell Abraham to sacrifice Isaac?”