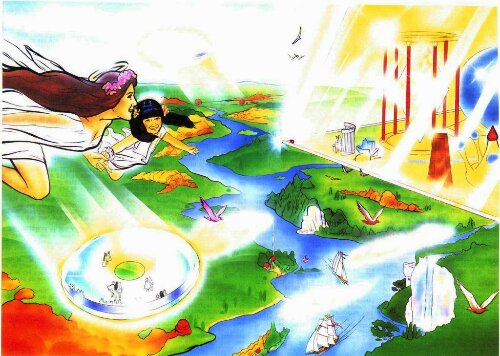 Flying through the sky, little Rosy and her mother are returning Home from an exciting trip they have made out onto the beautiful New Earth!–And though their journey took them thousands of miles around the world, long distances are no problem for these New-World travellers, for they can fly at any speed that they like!–Not just at the slow speed of sound, which the “jet-set” of the Old World used to boast of as “supersonic”, but these flyers, whether in their Saucers or flying freely on their own, can easily fly at the speed of light!–And even faster if they wish!

On trips such as this, travelling around the Earth, they usually fly slow enough to enjoy the many different and beautiful sights below. But when exploring and visiting the stars and planets throughout the Universe, light-speed flight and faster is preferred!

As soon as Rosy and her mother are within a few miles of their home, the gigantic pyramid-shaped crystal-gold City, they slow down their flight to a very relaxing pace, almost floating through the air. The beautiful landscape over which they are flying was once upon a time the site of a huge body of water known as the Pacific Ocean! However, in this amazing New World there are no more seas!–The entire Earth, on which the billions of the New Earth’s residents live, is a beautiful, lush green Paradise of rolling hills, fields, farms, forests, lakes and rivers!

In their frequent travels and missions out from the Golden City, many of its people choose to fly in the City’s Flying Saucers, which offer comfortable and scenic group tours of the outside world, silently whisking their passengers away to wherever they need or would like to go! Rosy and her mother had left the City in one of these Saucers which took them to the far-away village which they regularly visit. At the village they help, counsel and advise the villagers, freely distributing and giving away the magical leaves from the Trees of Life that grow in the Golden City to all of the villagers who need their healing.

Rosy, who loves the fun and freedom of flying on her own, had asked her mother if they could fly back Home without a Saucer, which her mother had agreed to. Rosy flies very gracefully for such a young child, and on the way Home was able to practise her sky-ballet with her mother. They even stopped to play an exciting game of Hide-and-Seek amongst the clouds!

As they now float through the sky, Rosy is talking away and her mother is busy answering her many questions: “Oh Mommy, that was such a fun visit to the village! They were so happy to see us! But I was wondering”, she asks, “why is it that our friends in the village can’t fly like we do?”

“Their bodies don’t have the same super-powers that ours do”, her mother answers. “When the King returned to the Old Earth near the end of the 20th century, they did not yet believe in Him.–So they couldn’t rise into the sky in new super-bodies like all of the King’s faithful followers did! But on the day of the Great Judgement, they rose from their graves in a different kind of new body, and He allowed them to live on the beautiful New Earth!–And though their bodies, like ours, will live forever, they are not as powerful or miraculous as the ones that we have!”

“Mommy, I have another question”, Rosy says. “I heard some of the men in the village last night talking about how happy and thankful they are that there are no more wars in the world!–What are `wars’, Mommy?”

“War”, her mother tries to explain, “was when the people on the Old Earth would form great armies to fight terrible battles, in which millions of people were hurt and killed.”

Rosy doesn’t really understand what the words “hurt” and “kill” mean, for in the wonderful Golden City in which she lives there is no pain, sorrow nor death! “But why did they fight against each other?” she asks.

“Well, Honey”, her mother says, as they continue floating through the sky, “the world used to be divided into many separate areas called `continents’ and `countries’. Many of these were physically separated from each other by the high mountains and by the great seas and oceans that used to cover the Earth.”

It’s hard for Rosy to imagine a world that was so divided by seas and mountains! The world that she knows is all one great United Kingdom of Love, and all of its billions of people work together in perfect peace and harmony!

Rosy’s mother continues to explain: “Men used to be very selfish and greedy in those days, and would often try to steal and take things from each other.–And sometimes whole groups of men, the governments and war-makers of entire nations and countries, would try to take away the lands or goods of other countries, and this would cause wars! In fact, just before our King came and took over the Earth, evil and violent men of war had created horrible Hell-weapons to completely blow up and destroy each other!”

“I’m sure glad that the world is so peaceful now, Mommy!” Rosy exclaims.

“Yes, it’s wonderful, Honey!” her mother replies, as they sail towards the beautiful City of Crystal Gold before them! “At last things are the way that the King originally planned for them to be in the very Beginning!–Beautiful peace and plenty for all!”

+ + + + + + +
This little story of Rosy and the wonder world in which she lives is not just a fairytale or some kind of science-fiction story, but is based upon the Word of God! Believe it or not, the Bible tells us what the world of the Future will be like when the King of kings, Jesus Christ, soon returns to take it over!

The Bible says that the present age of evil Man in which we are now living will soon be ended! But first, the evil and greedy anti-God forces that are now taking over the world will unite the world in a wicked One-World Empire led by a cruel and powerful Dictator known as the Antichrist or Beast! ( Rev.13 )

The Antichrist will rule the world during its last 7 years! Then King Jesus will return “in the clouds of Heaven with power and great glory” to save the world from total nuclear destruction and to rescue His Children from the clutches of their anti-God enemies!–They will rise to meet Him in the sky in powerful new super-bodies, just like Jesus’ body when He rose from the dead! He and His supernatural resurrected Children will then conquer the world, and all of today’s hateful and vengeful men of war will be stopped at last! ( Mat.24:29-31 ; Isa.2:4 )

After a 1,000-year Golden Age of peace on Earth, all of the people who never knew the King will be resurrected also, and will stand before the Throne of God where they will be judged and assigned to their final rewards or punishments. ( Rev.20 )

At this time, God will remake the entire surface of the Earth into a beautiful Heavenly paradise that the Bible calls the “New Earth”! God’s great 1,500-mile high, 1,500-mile long and 1,500-mile wide crystal-golden Heavenly City will then descend from space, land on the Earth and be the Eternal Capital of this wonderful New World! All of God’s children who know and love the King of Love, Jesus Christ, will live with Him, inside His wonderful Heavenly City where they will enjoy the Lord and all of His Heavenly pleasures, adventures and wonders forever! ( 2Pet.3:10-13 ; Rev.21 )

Within the City, by its “River of Life”, grow the “Trees of Life, whose leaves are for the healing of the nations!” ( Rev.22:1,2 ) The residents of the City will gather these leaves to take to the people outside on the beautiful New Earth!

Would you like to live in God’s wonderful Heavenly City?–To be one of the saved, who will have a wonderful super-body to enjoy for all Eternity?–Well, you can! You can have all of this, plus a real taste and sample of Heaven in your own life right now, if you’ll just ask the King of Love, Jesus, into your heart!

Jesus loves you and will come into your heart right now if you’ll simply pray: