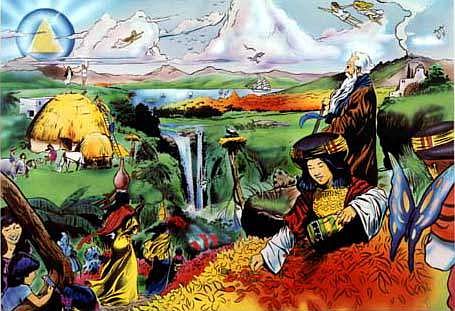 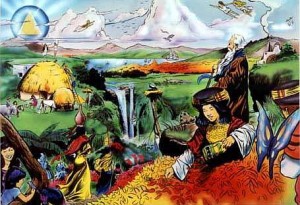 OLD GRANDFATHER LOVES TO WATCH THE GOLDEN CITY IN THE BIG BLUE BUBBLE RISE OVER THE MOUNTAINS! Every day he perches himself in his favourite spot right on time to watch this magnificent Globe begin its climb into the sky overhead. Today some of his family and neighbours are busy below, preparing a cottage for one of his granddaughters who is about to get married.

GRANDFATHER CAN REMEMBER WHEN THE GREAT GOLDEN CITY FIRST APPEARED IN THE SKY over 800 years ago, way back in the 1990’s! Though he was just a teenager then, the memories of the Age before the City arrived are still with him. His children and grandchildren always marvel at his incredible tales and stories about how strange life was in those days!

MEN WERE CRUEL and UNKIND TO EACH OTHER THEN. Nations trained their young men to fight in horrible conflicts called wars, where millions of people were wounded and killed! People crowded together by the millions, stacked on top of each other in tall towers in huge artificial environments called cities!–Where foul polluting vehicles roared and raced through the streets and skies!

GRANDFATHER’S STORIES ABOUT HIS ESCAPE FROM THE ONE-WORLD GOVERNMENT that arose just 7 years before the Golden City arrived always amazes his listeners! The evil leader of the World Government had claimed that he was God, and had demanded that all the World worship him and be branded with his Mark. Because Grandfather’s parents were devout members of another religion, they refused to worship the World leader, and therefore had to flee deep into the jungle where they hid from the World Government police for over three years!

HIS CHILDREN FIND IT HARD TO IMAGINE THE DANGERS that Grandfather and his family met in the jungle back then.–For now poisonous serpents, deadly spiders and stinging or biting insects no longer exist!–Nor have they ever seen any ferocious or dangerous lions, tigers or crocodiles.–These animals are all tame and friendly now–the pets of children!

HIS GRANDCHILDREN CAN HARDLY BELIEVE THAT BEFORE THE GOLDEN CITY CAME THAT PEOPLE USED TO GROW OLD and wrinkled and die of old age when they were only 60, 70 or 80 years old!–Grandfather’s beautiful granddaughter whom we see picking flowers in this picture is 120 years old and is still considered to be a young girl!–People on Earth now age very slowly, and some, like Grandfather, are already well into their 800’s!

IT’S ALWAYS THRILLING WHEN GRANDFATHER TELLS ABOUT THE DAY THAT THE FLYING-PEOPLE FIRST CHARGED OUT OF THE SKY, riding on great flying horses to rid the World of the evil empire of the One-World dictator! Then it was the World Government forces’ turn to flee and hide! But no matter where they hid, the super-human Flying-People sought them out and destroyed them all, until at last, the bestial dictator and all of his cruel and hateful worshippers were destroyed!

THE BILLIONS OF FLYING-PEOPLE THEN WENT TO EVERY COUNTRY, every province, every island, everywhere on Earth, to teach all of the surviving people the ways of their great new King–Jesus! A massive clean-up campaign was launched around the World and all weapons of war were burned and destroyed. Most of the big cities of the World had already fallen, either in the terrible Nuclear War in the last weeks of the World Government’s reign or in the gigantic earthquake that struck just before the Flying-People’s invasion!

THE EARTH ITSELF ALSO UNDERWENT A MIRACULOUS TRANSFORMATION when the Flying-People took over: All thorns, thistles and poisonous plants suddenly quit growing and died! Barren deserts and wastelands suddenly became green and fertile! All dangerous and bothersome insects, spiders, reptiles, etc. ceased to exist!–And as we mentioned, the formerly ferocious wild beasts suddenly became calm and playful, no longer meat-eating, but vegetarian!

THE SCORCHING HEAT and FREEZING COLD TEMPERATURES THAT HAD PLAGUED MANY PARTS OF THE WORLD WERE NO MORE, and the entire Earth now enjoyed a lovely temperate climate, without any violent storms, earthquakes, volcanic eruptions or other unnatural disasters! The wind no longer wailed or made a mournful sound as it blew through the trees, but everything was now happy and joyful!–Life was wonderful and Earth was a literal Paradise!

MEN HAD LEARNED TO FARM and LIVE OFF THE LAND AGAIN! Grandfather was the Village Elder of the area where he lived and the younger farmers often came to him for advice and counsel. He was greatly respected not only because of his age and many years of experience, but also because of his wisdom in the ways of the Golden City which he had learned from the Flying-People. In fact, on one occasion, the King of the Golden City Himself honoured Grandfather by personally visiting his village and home!

THIS AMAZING LOOK INTO THE WORLD OF TOMORROW IS NOT JUST A DREAM!–For according to the Bible, one day soon the World of Tomorrow will be like this! But first, within the next few years or even months, a great One-World Government will arise, led by a cruel Devil-possessed dictator known as the Antichrist! (Dan.8:23-25) Halfway through his 7-year reign he will declare himself to be God and set up a One-World Credit System in which all members of his System will be permanently branded with his Mark and number in their hands or forehead in order to buy or sell–or die! (Rev.13)

MILLIONS WILL REFUSE TO BOW DOWN to this dictator and will flee from his anti-Christ forces! Entire nations will rebel and war against the Antichrist World Government, bringing on the most trying time of trouble and tribulation that the people of faith have ever endured. (Mat.24:15-21) But millions–maybe billions–will survive!

NEAR THE END OF THE ANTICHRIST’S REIGN, JESUS CHRIST, THE SON OF GOD, WILL RETURN "in the clouds of Heaven, with power and great glory!" (Mat.24:29-31) to rescue all of His saved children that love Him! A great resurrection will take place and all of God’s people will rise from off the surface of the Earth in powerful, new resurrected super-bodies, just like Jesus had when He rose from the dead! They will then fly away with the Lord to a great Victory Party in God’s gigantic crystal-gold Heavenly City which will be floating above the Earth! (Rev.19:6-9; 21)

WHILE GOD’S CHILDREN ARE CELEBRATING IN THE HEAVENLY CITY, THE ANTICHRIST WILL GATHER HIS ARMIES TOGETHER to try to destroy the armies of the nations that oppose him in a great battle known as "Armageddon"! It is then that the Lord and His billions of resurrected saints or "Flying-People" will come charging back down to Earth on Heavenly horses from His Heavenly City in the sky to destroy all of the worshippers of the Antichrist! (Rev.16:12-16; 19:11-21)

THEN JESUS and HIS RESURRECTED CHILDREN FROM ALL AGES WILL WORK TOGETHER WITH ALL OF THE PEOPLE ON EARTH who survived this horrific Battle, to rebuild a new and better World, setting up the Kingdom of God on Earth! (Rev.20:4,6) All wars will have ceased and men will "beat their swords into plowshares and their spears into pruninghooks and they shall learn war no more!" (Isa.2:4)

THE BIBLE SAYS THAT THIS PERIOD WILL LAST FOR 1,000 YEARS, and is therefore known as the Millennium! The Curse that came upon the Earth when man fell into sin will be removed and "one who dies at a hundred years old will be but a child"! (Isa.65:20) The Earth will be restored to the original beauty of the Garden of Eden and the "lion will lie down with the lamb and the leopard with the baby goat, and a little child shall lead them!" (Isa.11:6,7)

ARE YOU ONE OF THE SAVED WHO HAS THE BRIGHTEST and HAPPIEST FUTURE TO LOOK FORWARD TO, ruling and reigning with Jesus as one of His resurrected Flying Super-People during this wonderful time?–You could be teaching the surviving natural people of the Earth, like Grandfather and his family, the loving ways of Jesus, the King of kings!

BY SIMPLY PRAYING THIS LITTLE PRAYER YOU CAN RECEIVE JESUS and HIS WONDERFUL LOVE RIGHT NOW!: "Dear Jesus, I believe that You are the Son of God and that You died for me. Please forgive me for all my sins. I now open the door of my heart and ask You, Jesus, to please come in and give me Your free Gift of Eternal Life!–In Jesus’ name I pray. Amen."

Her Healing Touch
Pie in the Sky
The Color of Love
Who Pulls the Strings?