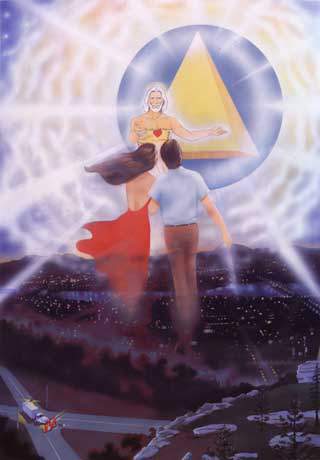 It had been a very special evening for both Roger and Judy. In the quiet little restaurant where they had dinner, they finally decided to get married. After several drinks and quite a few slow and romantic dances to celebrate the occasion, they realised that they’d lost track of the time and that the hour was very late, considering they both had to be at work in the morning.

To avoid the stop signs and traffic lights in town, Roger decided to take Judy home by way of the old highway that went around the town, which although it was a slightly longer route, had hardly any traffic, no stoplights and no police at this hour to enforce the speed limit. As they raced along the highway they continued enjoying each other’s company as well as the pretty view of the town lights below and the rich sound of the stereo which filled the car with their favourite music.

Neither of them noticed the big truck that was careening towards the approaching intersection from the left, until suddenly Judy cried, “Roger!–Look out!” The truck’s horn blasted its warning and Roger stepped on the accelerator to try to lunge past it, as it was too late to brake! The terrible sound of the crash–the screeching tires, the crumpling metal, the shattered glass, pieced the quiet of the night!–Then all fell silent again.

When Roger awoke, he immediately called out, “Judy!–Are you okay?”–“Yes, I think so!” she answered. They embraced and held each other, thankful to God that they had somehow managed to survive such a horrible accident! They realised that they were naturally dazed and in somewhat of a state of shock, but as they clung to each other they both felt so strange–so different.

Besides the relief they felt in finding that the other was all right, they felt incredibly light. “Roger, what’s happening to us?” Judy asked. “Our feet…they’re not even touching the ground!”–“I…I don’t know,” he answered. “It seems like we’re going up!–I’ve never felt like this before…Oh my God!–Look back down on the road by my car!–Those two bodies, they’re us!–We must be…dead!”

Suddenly, as if some unseen force took hold of them, they were drawn up, higher and higher, until it seemed like they were in some sort of a long dark tunnel or passageway through which they were now flying at an incredible speed! Soon a very dim light appeared far ahead of them, and as they flew through the tunnel it grew larger and brighter until it became dazzling and brilliant!–But strangely, it did not hurt their eyes!

As they drew nearer and nearer to this dazzling light, they both realised that it was a Person, a brilliant Being of Light! Everything around them was bathed in a brilliant warm light and they were both overwhelmed and filled with a great feeling of love and compassion!

Suddenly the Being of Light gives both Roger and Judy a detailed review of their entire lives! Although they don’t feel that they are actually in this review, they watch it like a full-colour, three-dimensional video and see themselves from the time they were tiny toddlers all the way through to the time of the accident!–All of the selfish things they’d done to their brothers and sisters, unkind and unloving deeds to their schoolmates–every little detail!–And all of the good things too!–When they had given a toy away, when they had helped and been kind to others etc.–Everything!

It was as if they were being made their own judges, to clearly and honestly see where they had failed and where they had succeeded!–There was no denying anything, it was all the truth and all very fair. And though they reviewed their whole lives right up to the present, scene after scene after scene, when it was over they felt that the entire reveiw had only last a few moments!

Having just vividly seen and recalled all that they’ve ever done, they both hesitantly look into the eyes of the Being of Light and are so relieved to find them still warm and loving, full of sympathy and understanding! He then extends a welcoming hand to them and motions toward a distant pyramid-shaped City of Light and says, “Fear not, little children, for it is your Father’s good pleasure to give to you His Kingdom! For in My Father’s House are many Mansions, and I have prepared a place for you, that where I am, there you may be also!”

They both realise now that this kind and loving person is Jesus, and that He has come to welcome them Home to Heaven! Although all of their wrongs and mistakes, shortcomings and failures of the past are perfectly known to Him, He still loves them and receives them with open arms! Tears of thankfulness roll down their cheeks as He embraces and comforts them, wiping the tears from their eyes!

He lovingly reminds them, “That’s why I died for you!–Because I loved you! And I took your sins upon Myself so that you won’t have to suffer for them! And you believed in Me and accepted My sacrifice for you, so your sins are cleansed and forgiven forever!–Come now, enter the Kingdom that I have prepared for you!”

And with that He takes them both by the hand and they begin flying again, as they had before in the tunnel! It seems as if they’re shooting through Space as they near the gigantic golden Pyramid that grows bigger and bigger as they approach it!

As they enter this beautiful crystal-gold Space City, they are thrilled to meet the reception party that is there to greet them! Roger can hardly believe his ears when a voice he has so terribly missed calls to him from behind, “Welcome Home, Son!” He turns to meet his mother whom he loved dearly who had died of an illness seven long years earlier! She looks just beautiful now–young, vibrant and radiant with health!–The way Roger remembered her when he was just a little boy! They cling to each other and weep for joy, thanking Jesus for this wonderful reunion!

Neither Roger nor Judy had ever imagined that Heaven could be so absolutely beautiful!–So wonderful! Everyone is loving and kind, no one is a stranger! The flower-filled gardens and parks, the trees and the grass are all more beautiful than any they’d ever seen on Earth! The Heavenly buildings and exhibitions are of such gigantic size, amazing design and shockingly beautiful colours and materials they can’t even be compared with anything they’d ever seen!

Everyone wears shimmering, shining garments of light that lightly drape and reveal their beautiful forms! No one is rushed or hurried–they just seem to float along the golden sidewalks and lush green grass, their feet barely touching the ground.–Others actually fly and gracefully glide through the air!

The story of Roger and Judy’s “Incredible Journey” is not just an imaginative fantasy, but is based on the life-after-death experiences of thousands of actual cases which have been scientifically documented in many authoritative studies and books! Of course, in all such cases, the subjects, some who were clinically dead for 20 to 30 minutes, were revived and came back, testifying that the Being of Light who reviewed their lives gave them the opportunity to return to their bodies!–But these are the exceptions, as it’s obvious that most people do not come back after passing on.

Are you ready for that incredible journey? Is there a place for you in God’s beautiful 1500-mile high, wide and long Heavenly City? (Revelation 21)–Roger and Judy were ready because they had both believed in and had received Jesus into their hearts!–“For God so loved the World (you and me!), that He gave His only begotten Son (Jesus!), that whoever believes in Him, should never die, but have Everlasting Life!” (John 3:16)

Jesus loves you and will forgive all of your sins and give you His free Gift of Heavenly Eternal Life if you’ll simply pray and ask Him to come into your heart! You can receive Him right now by praying this little prayer: “Dear Jesus, I believe that You are the Son of God and that You died for me. Please forgive me for all my sins. I now open the door of my heart and I ask You, dear Jesus, to please come in and give me Your free Gift of Eternal Life!–In Jesus’ name I pray. Amen.”

God bless you! WE LOVE YOU!