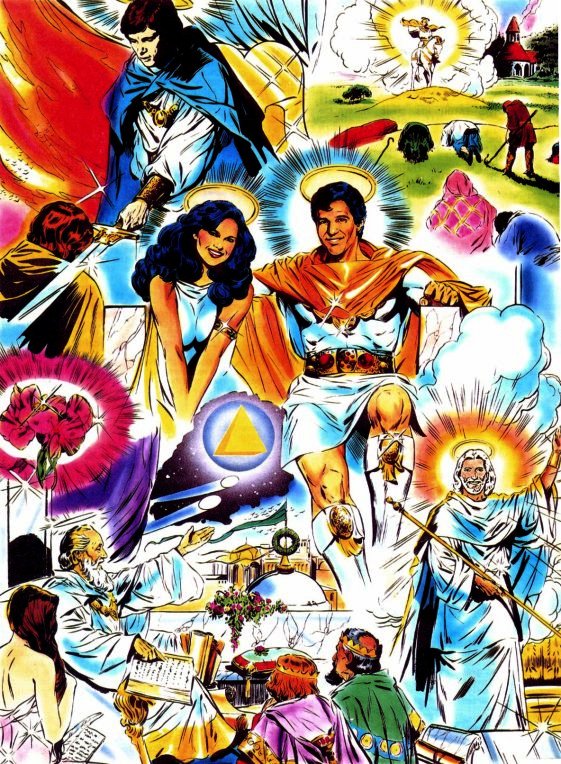 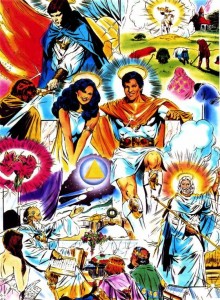 When the Golden Age dawned upon the Earth, the people of the Space King from the new Space City Planet all found themselves thrust into very important positions of leadership and great responsibility! To help them in their new tasks they found that they were given great powers and gifts such as they had never even dreamed of!

Each of them possessed powerful new super-bodies in which they never again knew sickness, weariness or pain! They were even able to read the very thoughts and motives of those that they ruled over! But their rule was a rule of Love, and they constantly gave their Earth subjects an example of love, mercy and understanding.

However, if any dared to rebel against and defy these loving rulers, the Rulers could exercise incredible powers to correct and straighten out the offenders! With a mere thought, or a glance or a motion of the hand, these rulers could freeze or vaporise any serious offenders! If any refused to honour their King and His Kingdom, they would smite them with plagues and withhold rain from their land!

They were also able to fly, to suddenly appear or disappear and to change their appearances into unrecognisable disguises so they could freely mingle among their subjects to observe and spy on them when necessary! These supernatural gifts and powers made the task of their responsibility of ruling over the normal people of Earth, who had none of these advantages, much easier than it would have been otherwise!

In the upper left-hand corner of our picture is Ivan, who was the son of a poor Russian farmer in the 1800’s. From the time he was 20 years old until he died in his late 50’s, he loved and tried to do his best for the Space King, sharing the Good News of His Love with as many as he could.

In his new body, Ivan is now strong and young again, and has been made Governor of a large district of his original home country, Russia. Here we see him knighting and bestowing a title and position of honour on one of the devoted and loyal Earth people!

On the upper right on horseback is Jason, who was originally from Canada. Jason knew the King almost all of his life. However, he was so busy trying to build a successful career for himself that he didn’t heed his Lord’s call to give his life in His service. Nevertheless, although he missed the best thing the King wanted him to do, during his life he told several dozen people about the King and His Love and led 14 of them into His Kingdom.

When Jason died and met the Space King face-to-face he felt very ashamed when he saw and realised how much he could have done–how much he should have done–for the One Who had done so much for him! Lovingly, the King wiped the tears away from Jason’s eyes and rewarded him for the little good that he had accomplished. Jason was made an overseer of 3 small villages of shepherds and farmers. Although Jason was a low-ranking authority, as you can see in the picture, the Earth people bowed and gave him the same honour that they did to all of the King’s representatives!

In the center of our picture are Rosa and Juan from Latin America. They are serving as Continental Supervisors over all of South America, counselling and advising the hundreds of Kingdom officers who assist them! They are greatly respected throughout the entire Kingdom and are known as having been faithful unto death!

Both of them loved the King so much that they gave up everything they possessed to become dedicated preachers of the Good News of His Love! When the cruel One-World Government of the World dictator, known as the Beast, rose to power, both Juan and Rosa continued telling others about their King and His soon-to-come Kingdom! Despite the Beast’s order that anyone who preached such things should be killed, they boldly defied his forces and delivered tens of thousands of people out of his clutches by giving them the Space King’s Words and warnings against the Beast and leading them to believe in and love their Space King!

For months the infuriated forces of the Beast were unable to stop them, as God protected and gave His people miraculous power!–Until one day, just after praying with a group of over 100 refugees, the Beast’s forces suddenly appeared atop the hills surrounding the clearing where they were meeting. Dozens of machine guns opened fire on them and Juan and Rosa graduated from this life!

In the lower left-hand corner of our picture is an elderly gentleman named David and his lovely young wife Maria. David had dedicated his entire life to bringing others to know the King of Kings! Despite the scorn, rejection and persecution he often received, he faithfully sought out and went to the most despised and spiritually hungry elements of society–youths, hippies, bums and harlots–to bring them hope and cheer with the Good News of God’s Love! So many downtrodden and needy young folks came to love and serve the Lord through David’s loving ministry, that he became known as a king himself!–“The King of the Beggars”!

One of his greatest joys in life was not only leading others to the King of kings, but teaching them from the Kingdom’s Guidebook, and even passing on to them many dreams, revelations and prophecies that the Great Space King personally gave him to help others! His wife was a faithful scribe who treasured and caught all of the Words of wisdom that the King gave David, and she wrote them all down so they could be read by many others!

David died just before the evil Beast demanded the World’s worship, and went ahead of Maria to be with their Lord! She continued spreading the King’s Words and teachings to millions for the next 3-1/2 years of the Beast’s horrible reign of Hell on Earth, God mightily empowering and protecting her!–Until one great day she was rejoined with her lover, David, when the King of Kings Himself returned to miraculously gather together all of His children!

Because they had been so faithful to teach and instruct so many in the ways and Words of their Lord, David and Maria were given a very important teaching position in the Golden Age of the Space King’s Reign on Earth! Here we see David giving God’s life-giving Words to two kings of the natural Earth people, instructing and inspiring them so they can return and teach Love to their nations!

On the lower right we see the great Space King Himself, Jesus Christ, the Son of God! According to the Bible, He will soon return “in the clouds of Heaven with power and great glory” (Mt.24:29-31), to rescue all of His people out of the horrible Hell on Earth created by the soon-to-rise bestial Antichrist World dictator! When Jesus comes, He resurrects the bodies of all of His Saints who have already died and gone on to be with Him! All of His people then instantly receive powerful new resurrection super-bodies that rise up to join Him in the air!

They will all then fly away with Him to a great victory celebration in God’s Heavenly Space City, the beautiful crystal-gold Pyramid that can be seen in the sky near the center of this picture! This wonderful Heavenly City is a gigantic 1500 miles long, wide and high!–And will be floating in the sky over the Earth after Jesus returns! After our Celebration there, Jesus and all of His resurrected Saints will return to Earth to conquer and destroy the evil Antichrist and his forces and to set up the Kingdom of God on Earth for 1,000 years!

The billions of natural, normal people who remain on the Earth will then be taught and helped by the Lord Himself and His Own saved children who will rule over the Earth people in power and love as we described!

Are you one of the saved who has the brightest and happiest future to look forward to, ruling and reigning with Jesus during this time? You can make sure you’re saved by receiving Jesus right now with this little prayer and He will come into your heart!

“Lord Jesus, I believe that You are the Son of God and that You died for me. Please forgive me for all my sins. I now open the door of my heart and ask You, dear Jesus, to please come into my heart and give me Your free Gift of Eternal Life!–In Jesus’ name I pray. Amen.”

Now that you know the Lord, you can do your best for Jesus to help others find and know Him too! Jesus says, “If you are faithful in the little things I give you to do now, I will give you authority over 10 cities!” (Luk.19:17)–He even says, “He that overcomes and keeps My works to the End, to him will I give power over the nations! (Rev.2:26,27)–Love and serve Him now and you’ll rule and reign with Him and His people then!