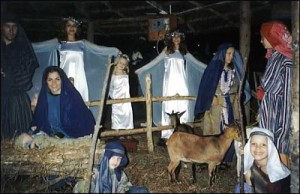 I think Christmas is a great time of year — if one scrapes the lies off the Truth and celebrates the occasion as it should be celebrated, as the birth of the Saviour, the Messiah, Jesus Christ, to earth, and who He truly is, God in the flesh, who died in the flesh hung on a wooden cross — the old Roman empire method of executing criminals — to take the punishment of our crimes against Him, the Creator, (example, not thanking Him for the life He gave us, but rather believing the great lie of Darwinism, etc.), and for crimes against His laws of love, hurting our fellow-man, usually through lies and selfishness.

Know your enemy
Daniel 9:27 - The Most Misinterpreted Prophecy in the Bible!
Dutch man builds an exact scale replica of Noah's Ark
The King James Version compared to the Geneva Bible

2 thoughts on “7 things you may not know about Christmas”