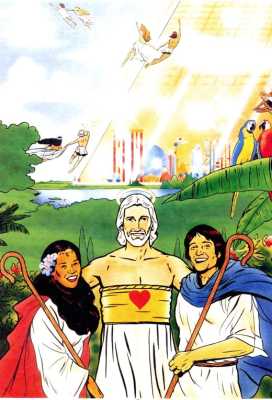 Both Ai Lin, the beautiful Asian girl, and Carlos, the handsome young man from Latin America in this picture, have very good reason to be smiling so happily!–They are being greatly honoured with a personal visit from the King of the great golden Super-City behind them!

They have both spent many hours speaking with the flying-people who come from this great golden City, and have learned so much about the King and His wonderful Love that they feel like they already know Him! But the fact that He has come to personally pay them a visit on their humble little plot of land has overwhelmed them to tears of joy and thankfulness!

They found that He is just as loving and kind, concerned and understanding as the flying-people said He was! When He first arrived at their cottage they both felt a little worried or nervous, knowing that the King knows everything about them, including all of their thoughts, deeds and wrongs they’d done in the past!–But one look into His warm and loving eyes immediately put them at ease, for they could see that His mercy and compassion were boundless!

Ai Lin was born long ago and raised in a society and culture to which the King and His teachings were almost completely unknown. She was taught a religion that acknowledged the King’s Father, but made no mention of His Son. The many complicated religious traditions and rituals that she was taught had often puzzled and confused her, but she did believe that a great God existed, and that one day she would face Him. So she tried her best to observe and keep the many laws of her religion and to be kind and honest with others.

When her life ended and she suddenly found herself in the presence of a supernatural being quite unlike any of the idols or gods to which she had prayed or offered incense, she was shocked! Yet she was relieved to find out that this Angel was loving and understanding, as he explained to her about the true nature of the Creator and of His desire to save and bring all people into loving unity with Himself. Ai Lin was then assigned to a place in the Realm of Spirits where she would learn more about the Creator and His Son, the King.

Carlos was raised in a family whose religion was supposed to believe in the King and His Words. He was familiar with the stories of His birth, death and resurrection on this Earth. For many years Carlos had weekly attended a great religious building to worship the King. But, sad to say, he found the many traditions and rituals in his religion almost as complicated and confusing as poor Ai Lin had found in hers!

By the time he’d reached his twenties he became so discouraged and disillusioned with his religion that he quit attending its services altogether! He went through the rest of his life as a “non-religious” person, entering the large religious buildings only for the weddings and funerals of a few friends and relatives.

Unlike Ai Lin, Carlos lived a rather careless life in which he mainly sought happiness and success for himself. And although he had never schemed or planned to intentionally hurt anyone else, on quite a few occasions he went ahead and did things for his own benefit, realising that others would be hurt by his actions.

Therefore, when Carlos died and stood before the Angel of Light, he was very afraid! Nothing was hidden, and all of his thoughts, deeds and even motives of the past were revealed! Nevertheless, he was very relieved to find out that he wasn’t being immediately tossed into a fiery place of torment for having stopped attending the buildings and services of his former religion! In fact, he found that observance of religious traditions and rituals had very little to do with his standing right now!

The most important question was whether he had received or rejected the Creator’s Son, the King!–And in Carlos’ case, as with Ai Lin’s, the answer was neither!–For though he had heard about the King, his former religion had placed so much emphasis on their own rules and laws and traditions, that no one ever really explained to Carlos the simple way to personally know the King. So though he had never received the King, he’d never fully rejected Him either, having never known or heard how to receive Him and His Love!

When the Angel reviewed his life he was very ashamed and sorry for the wrongs he had done and begged for forgiveness! But to fully teach him just how wrong such unloving actions are, Carlos was taken back in time to observe first-hand the sorrows and hardships he had brought upon those whom he had wronged. He was then taken to personally meet with these people from his past who had now passed on into the Spirit Realm–to apologise, ask their forgiveness and try to make things right. Much of Carlos’ time in the Spirit World was more of a correctional nature than merely instructional.

After several ages of teaching and training, the great Final Judgement Day arrived! Ai Lin and Carlos’ spirits suddenly rejoined their bodies of flesh which were resurrected from the Earth! They joined all of the billions of people who have ever lived who had not personally received the King, to stand before the Judgement Throne of the Creator! Because Ai Lin and Carlos had both received the correction and instruction they’d been given, they were mercifully allowed to live on the beautiful New Earth, outside of the King’s Great City, where we see them in this picture!

The entire surface of the Earth has been purged and purified and recreated into a beautiful paradise! The seas and oceans of the World have been removed, as have the great mountain ranges, and the entire planet is warm and sunny, green and fertile with five times more habitable land area then before! The Curse that came upon the World when Man fell into sin has been removed and the entire creation has been restored to the original beauty and perfection of the Garden of Eden!

God’s great Heavenly City, the gigantic 1,500-mile (2,400 kilometers) long, wide and high crystal-gold pyramid, has come down from Space and settled upon the Earth to be the Home of all of His saved Saints! They all have powerful, Heavenly super-bodies which they received when Jesus returned to rescue all of those who loved and believed in Him from the evil forces that took over the World and ruled it with their Antichrist One-World Government! (Mat.24:29-31; 1Thess.4:16, 17; Rev.13, Rev.14)

Outside the City on the beautiful New Earth are whole nations of other resurrected people whose bodies are a little more like the bodies that we have now. (Rev.21:24-26; 22:2) These folks outside, like Carlos and Ai Lin, don’t live in the City yet because they didn’t receive God’s Son, Jesus, during their former lives.–Many because they never heard or fully understood the Gospel. But there on the New Earth they are all learning to know and love Him at last!

But why would anyone want to live a natural life outside on the New Earth when they could live a supernatural life inside the great Heavenly City itself?–Enjoying it and all of its marvels and pleasures in their resurrection super-bodies! To know the King, Jesus, and to become a saved Citizen of God’s wonderful Heavenly City, who will go directly to be with Him when you die, all you have to do is receive God’s Love and Salvation by asking Jesus into your heart now!