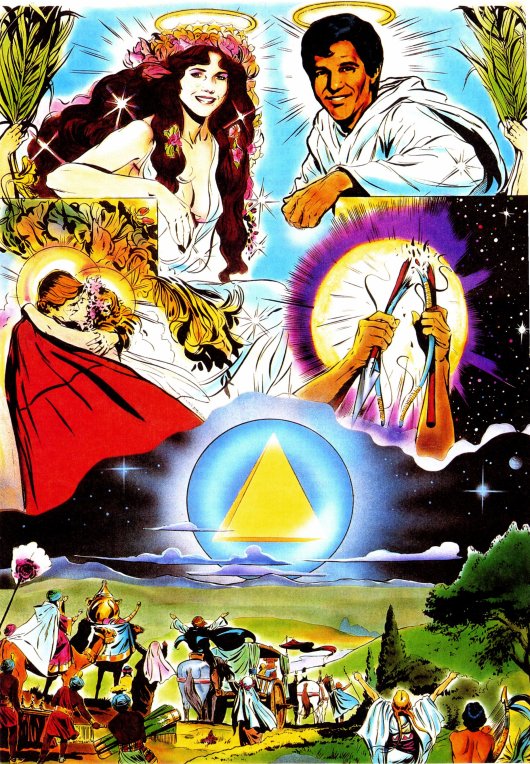 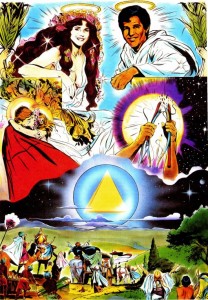 THOUGH THEY WERE BOTH BORN IN DIFFERENT COUNTRIES, were raised in different cultures, learned and spoke different languages, because of the common Love they shared in their former lives, the beautiful couple at the top of this picture are now working together in perfect harmony in the World of the 22nd Century!

FOR THEIR KING, THE LORD and MASTER OF THE UNIVERSE, INVADED and TOOK OVER THE ENTIRE EARTH! His great Space Vehicle, that beautiful golden Pyramid in the gigantic blue bubble, served as the base in space from which He and His powerful Flying Forces launched their invasion!

BECAUSE THEY WERE BOTH FAITHFUL TO LOVE and SERVE THEIR KING in their former lives, this couple is now trusted with great responsibilities as judges on the conquered Earth! Immediately after the Invasion they were assigned to a specific area of the World to help judge and organise the millions of survivors there.

THE CRUEL WORLD LEADER KNOWN AS THE BEAST and HIS EVIL ONE-WORLD EMPIRE WERE DESTROYED IN THE INVASION! All of his followers who had been branded with his Mark were eliminated! But even though these worst of all men were gone, there were many who had escaped the Mark of the Beast and survived into this new Era who needed to be reckoned with.–Such as the rich who had been selfish and unkind to the poor and had withheld wages from their labourers!

IN THE CASE OF SUCH SELFISH RICH PEOPLE, they were usually assigned to one of the many burial teams whose job was to find and bury the remains of the millions of followers of the Beast who had been slaughtered in the Invasion. People who had been good and kind to others were often rewarded with positions of responsibility among the other natural people, helping to supervise and direct village affairs, farming projects etc.

IMMEDIATELY AFTER THE KING’S CONQUEST OF THE EARTH, all weapons of war had to be gathered and destroyed. All of the huge industries, chemical plants, factories etc. that manufactured or were powered by anything that was harmful, polluting, wasteful or dangerous were dismantled. All of the so-called “modern” means of rapid petroleum-burning transportation were also done away with.

THE HUGE CITIES OF THE WORLD HAD ALREADY FALLEN in the super earthquake that rocked the Earth and toppled all of their tall buildings and towers of commerce like stacks of dominoes! The steel and concrete rubble of these once proud and glorious centers of the former Age’s people were now abandoned. The Earth eventually seemed to absorb them, as grass, moss and wild flowers grew and covered the huge heaps where these formerly great metropolitan areas were buried in ruins!

AFTER THE FIRST HUNDRED YEARS OR SO THE WORLD WAS FINALLY CLEANED UP and order was established as the King had decreed. Ever since the King and His floating City arrived, the aging process for the survivors on Earth has slowed down dramatically, thus babies that were born just after the Invasion took place are still young children over 100 years later!

THE NEW JUDGES’ DECISIONS ARE ALWAYS FAIR and JUST, MERCIFUL and LOVING. Earth’s survivors soon found out that they couldn’t lie or deceive these new rulers when presenting petitions, seeking help or counsel, lodging a complaint against a neighbour etc.–For the judges were able to actually read their thoughts and to discern the motives of their hearts!

THE JUDGES HAVE TRIED TO TEACH EVERYONE ON EARTH TO LOVE, RESPECT and HONOUR THEIR GREAT KING. His gigantic City in the sky serves as a constant reminder of His majesty and power. The splendour and beauty of this great golden Pyramid rising into the night sky has so overwhelmed the band of travelling Earth-people that we see in this picture, that they have paused to shout and sing praises to the King of this wondrous City!

THE EARTH ITSELF HAS UNDERGONE A MIRACULOUS TRANSFORMATION! The formerly wild and dangerous beasts such as lions, tigers, wolves etc. are now calm and peaceful, even playful, and are the friends and pets of man and his children! Meat is no longer eaten by man or beast, for all have become vegetarian! The annoying and harmful insect pests that had plagued and pestered mankind and his crops are eliminated now, as are all dangerous scorpions, spiders, parasites etc.!

THE EARTH NOW BRINGS FORTH ITS GRAINS, FRUITS and VEGETABLES IN ABUNDANCE, with no more weeds, thorns, thistles etc.! Mankind has learned to live off the land again, as he did in the beginning! Formerly barren and desert areas of the Earth are now fruitful and fertile! Most of the people are now very happy and content with the new lives they lead in this virtual Paradise on Earth!

HOWEVER, SAD TO SAY, SOME ARE UNGRATEFUL and REBELLIOUS towards the great King and His representatives and resent being under their authority! When these malcontents refuse to honour or submit to the King, the judges exercise amazing powers by withholding rain from their land and even smiting them with plagues until they learn their lessons!

BUT MOST PEOPLE FIND IT EASY TO YIELD TO and OBEY THEIR JUDGES and RULERS. After all, those who survived from the former Age have seen the King come and destroy their former enemies, the Beast and his forces!–They can see His great Space City rising and setting in the sky above!–And they can see and feel the power and love of the King’s representatives!–So most are thankful for this chance that they’ve been mercifully given to learn about the King and to know His wonderful Love!

THIS AMAZING LOOK INTO THE FUTURE IS NOT JUST A DREAM!–For according to the Bible, one day soon the entire Earth will be ruled like this! But first, within the next few years or even months, a great One-World Government will arise, led by a cruel Devil-possessed dictator known as the Antichrist! (Dan.8:23-25) Halfway through his 7-year reign he will declare that he is God and demand that the World worship him and receive his Mark and number branded in their hands or foreheads in order to buy or sell! (Rev.13) Those who refuse to worship this Satanic dictator will be hunted and persecuted! (Mt.24:15-21)

NEAR THE END OF THE ANTICHRIST’S REIGN “SHALL APPEAR THE SIGN OF THE SON OF MAN”–His great golden City in the sky–as Jesus Christ, the Son of God, returns “in the clouds of Heaven, with power and great glory!” (Mat.24:29-31) A great resurrection will take place and all of God’s people will rise from off the surface of the Earth in powerful, new resurrected super-bodies! They will then fly away with the Lord to a great Victory Party in God’s gigantic crystal-gold Heavenly City which will be floating above the Earth! (Rev.19:6-9;21-ALL)

IN THE MEANTIME, THE ANTICHRIST WILL GATHER HIS ARMIES TOGETHER to try to destroy the armies of the nations that oppose him in a great battle known as “Armageddon”! It is then that the Lord and His billions of Saints come charging back down to Earth from His Heavenly City to destroy all of the worshippers of the Beast! (Rev.16:12-16; 19:11-21)

THEN JESUS and HIS RESURRECTED CHILDREN FROM ALL AGES WILL WORK TOGETHER WITH ALL OF THE SURVIVING PEOPLE ON EARTH to rebuild a new and better World, setting up the Kingdom of God on Earth! God’s supernatural Saints will be powerful judges, governors, rulers, kings and priests over the natural people who remain. (Dan.7:18,26,27; Rev.20:4,6)

THE BIBLE SAYS THAT THIS WONDERFUL PERIOD WILL LAST FOR 1,000 YEARS, and is therefore known as the Millennium! The Curse that came upon the Earth when man fell into sin will be removed and “one who dies at a hundred years old will be but a child”! (Isa.65:20) The Earth will be restored to the original beauty of the Garden of Eden! (Isa.11:4-9)

ARE YOU ONE OF THE SAVED WHO HAS THE BRIGHTEST and HAPPIEST FUTURE TO LOOK FORWARD TO, judging, ruling and reigning with Jesus during this time?–Why wait until then to finally get to know Jesus and His loving Words and ways, when you can know Him now by simply praying this little prayer:

“LORD JESUS, I BELIEVE THAT YOU ARE THE SON OF GOD, and that You died for me. Please forgive me for all my sins. I now open the door of my heart and ask You, dear Jesus, to please come into my heart and give me Your free Gift of Eternal Life!–In Jesus’ name I pray. Amen.”

THEN, ONCE YOU KNOW THE LORD, you can do your best for Jesus to help others find and know Him too! His Word says that those who are faithful with a few things now will be trusted with many things and great responsibilities then! (Lk.16:10; 19:17,19)