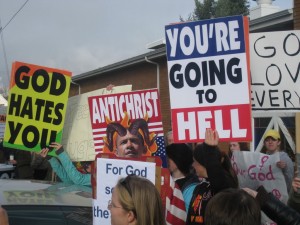 Oct. 4, 2012: Yesterday I listened on YouTube what two granddaughters of Fred Phelps, the pastor of the infamous Westboro Church in Topeka Kansas, had to say, “I’d rather the whole world go to hell. Yeah, that’s just fine with me because … whatever God’s Will is, is great by us.” (From http://www.youtube.com/watch?v=-gX-vQ5sMOw )

And then they talked about disasters and future disasters as the work of God and laughed about it! It grossed me out. Their attitude is the exact opposite of the Message of the Bible!

1 Timothy 2:4  Who (God) will have all men to be saved, and to come unto the knowledge of the truth.

These girls are literally laughing at people dying and burning in hell! Does God do that? The Bible says:

Ezekiel 33:11  Say unto them, As I live, saith the Lord GOD, I have no pleasure in the death of the wicked; but that the wicked turn from his way and live: turn ye, turn ye from your evil ways; for why will ye die, O house of Israel?

I was particularly disturbed by the “God hates you” sign held by one of the members of the Westboro Baptist church. Does the Bible say that? I did a Bible study using the nifty Theophilos Bible software. It was created for MS Windows but runs just fine in Linux under WINE. Theophilos Bible uses the good old KJV, the most authoritative English version of the Bible.

There are only 17 Scriptures in the Bible with the combination of God and either hate or hateth, and not one of them talk about God hating a person! It talks about people hating God, or people hating God’s people, or God hating some sin or deed, but not the person. Below is the output of a search of a combination of God and hate, a total of eight verses:

There are 36 verses with the combination of Lord and hate or a grammatical form of the word hate, and only one of them, Psalm 11:5, say that the Lord hates wicked people, specifically the person who loves violence! Who would love violence? People who profit from waging war, international bankers who profit from war, individuals who receive blood money. I think most of the world hates those kind of people as well. But though they may be still powerful in the world, they are an exceedingly small minority of people!

Adding it all up, verses with God and love are 3.5 times more than verses containing the words God and hate with only one verse which says God hates those who love violence.

There are also verses where God using the first person singular “I” says He hated Esau, but that was in comparison for His love for Jacob! God blessed Esau and he became prosperous. And though Esau hated Jacob for deceiving his father Isaac to get the blessing that was supposed to come to him, he didn’t hold a grudge forever and welcomed Jacob’s return.

God does not hate the world in general, the Bible says that God loves the world!

For God so loved the world, that he gave his only begotten Son, that whosoever believeth in him should not perish, but have everlasting life. – John 3:16

Conclusion: Those poor relatives of Fred Phelps who comprise the majority of his church follow only him, not the Jesus Christ of the Bible, nor what God’s Word says in the Bible. If they don’t have love, they don’t know God for the Bible says:

I pray they wake up and realize they are a cult following a cult guru: Fred Phelps.

What early Protestants had to say about the 70th Week of Daniel
Dispensationalism and Its Influence on Eschatology
Know your enemy
Kent Hovid Profoundly Answers the Age Old Question, "Where Did God Come From?"