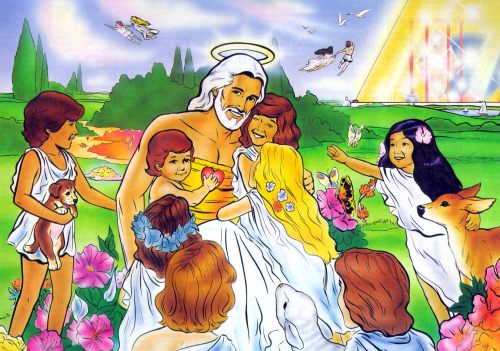 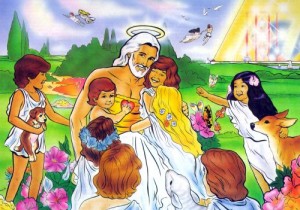 DO YOU KNOW WHO THE KIND LOOKING MAN IN THIS PICTURE IS?–His name is Jesus, and He wants you to know that He loves you!

JESUS ALWAYS SHOWED A SPECIAL LOVE, UNDERSTANDING and CONCERN FOR THE CHILDREN, and was always their Friend. The Bible tells us that one day when Jesus was speaking to a crowd of people, some mommies and daddies “brought young children to see Him.” (Mark 10:13) But it says that His followers tried to turn away those who brought the children, telling them that their Master should not be disturbed or interrupted.

“BUT WHEN JESUS SAW IT”, THE BIBLE SAYS, “HE WAS NOT PLEASED WITH HIS FOLLOWERS, and TOLD THEM, ‘LET THE LITTLE CHILDREN COME UNTO ME!–Forbid them not, for of such is the Kingdom of Heaven!–For truly I tell you, unless you become as a little child, you shall not enter into My Father’s Kingdom!’ He then called the children, took them up in His arms and put His hands upon them and blessed them.” (Mark 10:13-16; Matthew 18:3,4; Luke 18:15-17)

WHEN JESUS SPOKE TO THE PEOPLE HE OFTEN TOLD THEM STORIES and PARABLES to help them understand God’s Love. He made His religion simple enough that everybody could understand it. He never told people that they had to follow a lot of complicated and hard-to-keep religious rules and laws.–All He did was preach Love and show Love. He even said that you can obey all of God’s laws by keeping just two little commandments: Love God with all your heart, and love your neighbour as yourself! (Matthew 22:37-40)

GOD HIMSELF IS REALLY TOO BIG and TOO GREAT FOR US TO UNDERSTAND. He is the great Spirit of Love Who created you and me and this beautiful World and the entire Universe! But because God loved us, He wanted us to somehow know and love Him, so to show us His Love and to help us understand Him, He sent His Own Son, Jesus, to Earth in the form of a man!

JESUS WAS LIKE A PICTURE OF GOD, TO SHOW US WHAT GOD IS LIKE!–And that picture is a picture of Love, because everything Jesus did was in Love–He talked about Love and showed Love and lived Love! Then finally, in Love, He gave His life for you and me, so that we could know God’s Love and forgiveness.

BUT NOT EVERYONE LIKED WHAT JESUS SAID.–In fact, some of the rich and powerful religious leaders of His day became very angry at Him because His teachings were setting the people free from all of their traditions and from their control! They became very afraid of Jesus because He was becoming so popular with the common people.

THESE EVIL ENEMIES OF LOVE FINALLY FORCED THE ROMAN GOVERNMENT TO STOP JESUS and KILL HIM! They nailed Him to a cross and it looked like the end of His work of sharing God’s Love.–But three days after He was buried, something happened that shocked His enemies and proved to all of His followers that He really was the Son of God!–He arose from the dead!

BEFORE RETURNING TO BE WITH HIS FATHER IN HEAVEN, He promised that He would send His Spirit into the hearts of everyone who loves and believes in Him! So He is still very much alive today, not only in Heaven, but also in the hearts and lives of millions of His children throughout the World!

AND JUST AS HE HAS CALLED and OPENED HIS ARMS TO THE CHILDREN IN THIS PICTURE, so He calls you today,”Come unto Me!” (Matthew 11:28) To all of you who will receive His Love, He promises not only a wonderful life of happiness today, but a much better world of Tomorrow, a beautiful Paradise where there will be perfect peace and plenty for all!

THE BIBLE SAYS THAT VERY SOON JESUS WILL RETURN “IN THE CLOUDS with power and great majesty”, to rescue all of His children from the evil forces that are now taking over the World! (Matthew 24:29-31) Everyone who loves Jesus will then receive a wonderful new super-body just like Jesus’ body when He arose from the dead!

THEN AFTER GIVING THE WHOLE WORLD A CHANCE TO BELIEVE IN HIM and TO RECEIVE HIS LOVE, God will remake the Earth into a beautiful New Earth!–A wonderful New World just like the Garden of Eden, the way God made things in the Beginning.

THERE WILL BE NO MORE DANGEROUS OR POISONOUS ANIMALS, INSECTS, PESTS OR PLANTS! And the entire Earth will have a perfect, warm and mild climate! There will be beautiful green, rolling hills, lakes and streams, flowers, trees and grass everywhere, with no more of man’s ugly and dirty cities, factories, weapons or pollution!

THE BIBLE SAYS THAT THE WILD and DANGEROUS ANIMALS–like lions, tigers, bears and wolves–will all be tame then, and will be the friends of man and the pets of his children!–And the animals will even talk with man and each other, just like they used to when God first created the World!

IN THAT DAY, GOD’S GREAT GOLDEN HEAVENLY CITY WILL COME DOWN FROM SPACE and land on the Earth, and all of His children who love and believe in Him will live with Him in that Heavenly Place! In their new Heavenly super-bodies they will be able to fly through the sky freer than the birds, and will never again feel weariness, sickness, hunger nor pain!–But will enjoy Heavenly happiness, unending adventures and beautiful pleasures with the Lord and each other forever! (Revelation 21 and 22)

ARE YOU ONE OF GOD’S CHILDREN WHO WILL LIVE WITH HIM IN HIS HEAVENLY CITY?–Have you “come to Jesus”? If so, He will come into you!–Into your heart to forgive you for all of the wrong that you have ever done and to give you His free Gift of Eternal Life so that you can live with Him forever in His Great Golden Heavenly City!

THE REASON WHY WE NEED TO COME TO JESUS, is that we have all done wrong and been naughty, so we deserve a spanking, a punishment, which makes our Heavenly Father, God, very sad. But God’s Son, Jesus, our Big Brother, loved us and the Father so much, that He knew that the spanking would hurt us both, so He offered to take it for us! So God let Him, and promises to forgive us if we will simply love and thank Jesus for His Love!–For giving His life for us!

YOU CAN RECEIVE JESUS’ LOVE and FORGIVENESS RIGHT NOW BY PRAYING THIS LITTLE PRAYER: “Dear Jesus, please forgive me for being bad and deserving a big spanking! Thank You so much for taking my punishment for me and dying for my sins. I now ask You, dear Jesus, to please come into my heart and give me Your free Gift of Eternal Heavenly Life!–Help me to love You, read Your Word and try to help others to know You also, in Jesus’ name I pray, amen!”

ONCE YOU HAVE ASKED JESUS TO COME INTO YOUR HEART, He will become your best and closest Friend! He is a companion Who will always be with you , Who will never, ever leave you! So if you ask Jesus into your heart, you will never be alone. He will always hear your prayers and take care of you, and you will never lose Him or His Love!