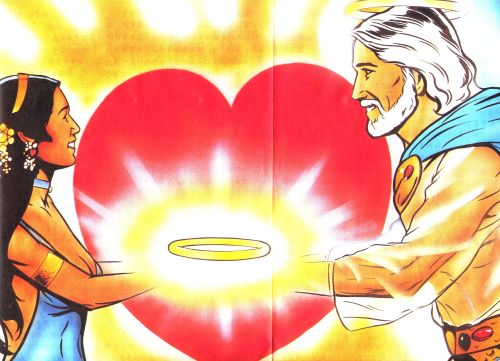 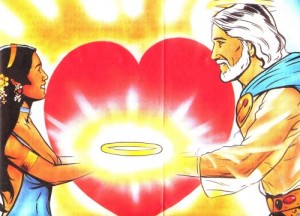 The year is sometime in the mid-1990’s, and this is the happiest day of May Ling’s life!–For at last she has come face-to-face with the One Whom she has loved and lived for during the past ten years!

When May was a university student, she met a young man who told her about Jesus. May had heard about Jesus before, but had never really understood His love for her, nor how she could personally know Him. But she prayed then and asked Him to come into her heart, and she found such love and happiness in Jesus that she decided to dedicate her whole life to Him!

Together with the young man who introduced her to Jesus, she learned more and more about God’s Word and living fulltime for Him. As the weeks and months passed, her love and faith grew and she was able to help many others find the love and joy that she herself had found. Although May and her new friends had no fixed income or salary, they trusted God to supply all their needs as they served Him faithfully, and He never failed.

Even during the great Worldwide Economic Crash that shook the Globe, when riots, confusion and famine tore through the nations, the Lord never failed to provide for and take care of May and her fellow followers of Jesus!

As nation after nation fell into complete lawlessness and anarchy, the super-powers each tried to take advantage of the situation. Soon the World was not only falling apart economically and socially, but with tensions building between America and Russia, the World was heading towards global Nuclear War! Considering these circumstances, it was not surprising that when an Antichrist coalition came forward at the United Nations with a 7-year plan for peace, the U.N. General Assembly readily accepted it.

So a new One-World Government was formed, led by the genius who had drawn up this peace Covenant. During the first 3-1/2 years of his government’s rule, a measure of peace and stability returned to most countries. May faithfully continued telling others about the Lord during this time.

But 3-1/2 years after coming into power, the leader of the One-World Government broke his peace pact, invaded Israel, erected a computerised Image or Idol of himself at the Jews’ new Temple in Jerusalem, and proclaimed that he himself was God!–And that all the World must now worship him and receive his credit mark or number in their foreheads or hands in order to buy or sell!

At this point, entire nations rebelled against the One-World Government, and the World was thrown into the worst time of trouble it had ever known as the World Government’s forces warred against all who resisted them! May recognised that this World leader was the Antichrist, the Satanic World King that the Bible Prophets predicted would arise and take over the World in the very last days of Man’s rule on Earth!

Although the persecution of people of all faiths was severe and many who refused to worship the Antichrist were executed, May and others like her kept on telling others about the Lord and about the events that were happening and soon to happen according to Bible Prophecy.–God performed many miracles of protection, provision and power to keep His children going through that time of trouble!

Then one night, 3-1/2 years after the bestial Antichrist had broken his peace pact, May was sleeping in her underground hideout after having narrowly escaped being caught by the World Government police patrol. All of a sudden, she was startled by a brilliant flash of light from the sky and a thunderous trumpet-like sound!–At last, the Day that she has been longing for has arrived!

Suddenly a wonderful feeling passes through her body–and she is instantly changed! She no longer feels hungry or tired, but strong and renewed! Then she miraculously flies right through the roof of her house into the sky!–Where she joins millions of others–many who rose from the dead, from their graves, and many who were alive and have been transformed like she was!

Jesus Christ has returned!–“In the clouds of Heaven, with power and great glory!” (Mt.24:29-31) The great “Resurrection of Life” has taken place and He has rescued all of His saved children from the cruel Antichrist World below, gathering them together with Him in the air!

He then whisks them all away to God’s great Heavenly Space City for the grandest, most thrilling and exciting, happiest Party that has ever been held, “The Marriage Supper of the Lamb”! (Rev.19:6-9)–Their wonderful reunion and Victory Celebration with the Lord and all of their loved ones!

At this great party, Jesus welcomes and rewards each of His children! In this picture May Ling is meeting Jesus, her Lord and Lover, at last! He is giving her a wonderful “Crown of Life” for her faithfulness to Him, welcoming her with a loving, “Well done, My good and faithful servant!–Enter into the joy of your Lord!” (Mt.25:21)

May Ling’s story is based on the actual lives of thousands of people like her who are giving their all to serve Jesus today.–And all of the future events are taken from Bible Prophecy and will soon take place!–Are you ready?

–Do you want a crown of life from Jesus? Will you, like May Ling, do your best for Him, to reach others with His Love? Have you received His Love personally in your own heart? Are you one of His saved children? If you’re not sure, simply pray this little prayer, and Jesus will come into your heart to stay!:

“Dear Jesus, I believe that You are the Son of God and that You died for me. Please forgive me for all my sins. I now open the door of my heart and I ask You, Jesus, to please come in and give me Your free Gift of Eternal Life! Help me to love You and to love others by telling them about You. In Jesus’ name I pray. Amen.”

God bless you! We love you!