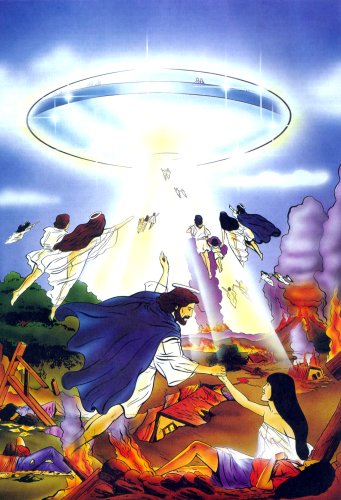 THE CATASTROPHE THAT STRUCK SUZY’S QUIET LITTLE COUNTRY VILLAGE was something that neither she nor her fellow villagers were prepared for! The nearby legendary volcano had not erupted for generations, & though this region frequently experienced minor earth tremors, no one was expecting the killer-quake that utterly destroyed their village & took all but a few of their lives!

PRIOR TO THE DISASTER, LIFE IN THE SLEEPY VILLAGE HAD BEEN GOING ON AS USUAL. The only out-of-the-ordinary event which had recently taken place was the arrival of a small band of travelling minstrels. They spoke freely to all about the King of Love & His Kingdom, which they said were not of this World! They also distributed many colourful posters which they described as “travel brochures” that told of the beauties & glories of their Kingdom, a Paradise to which everyone was freely invited!

SUZY WAS ONE OF THE VILLAGERS WHO BELIEVED THE PILGRIMS, & after listening to their Message & several of their songs of love which they sang to her & a small group of her friends, she showed them great kindness by offering them a place to stay for the evening. Thankfully accepting her invitation, they went with her to her humble home where she prepared a meal for them & put them up for the night. After dinner, they spoke with her around the table, explaining:

“ALTHOUGH OUR KING & HIS GREAT KINGDOM ARE PRESENTLY INVISIBLE TO OUR MORTAL EYES, PLEASE BE ASSURED THAT THEY ARE REAL!–And if you believe & accept Him into your life, although you may not see Him, you will feel His presence, His loving Hand upon you, & you’ll know His Love which is greater than any other you will ever find in this World!–He will become your closest Friend, the dearest One in your life, & His Love will wash away all of your fears!–Even the fear of death!–For you will know that there is a special place prepared for you in His Kingdom where you will live with Him & others who love Him forever!”

SUZY BELIEVED THEIR WORDS &THOSE IN THE SPACE KING’S BOOK, & THAT NIGHT DECIDED TO ASK THE KING OF LOVE TO COME INTO HER HEART! In so doing, she immediately experienced the love, peace & joy that these strangers had promised she would find! She then knew that all they had said was true!

AFTER THE PILGRIMS LEFT, THE VILLAGE WAS DIVIDED. Some, like Suzy, not only believed their Message, but personally received the King of Love into their hearts, thus becoming actual members of His out-of-this-World Kingdom! But others scoffed & completely rejected all that the pilgrims had said!–“We already have our own beliefs & traditions!”

IT WAS JUST OVER TWO WEEKS LATER THAT DISASTER STRUCK!–The nearby ancient volcano literally exploded in a deafening roar that could be heard for hundreds of miles in all directions! Rivers of molten lava spewed from it, setting ablaze much of the surrounding countryside. As the startled villagers gazed in horror towards the erupting mountain, the earth beneath them suddenly heaved & the killer-quake hit in all its fury! In many places the earth cracked & split, opening its fiery mouth & swallowing entire houses!

SUZY, WHO HAD RUN OUT OF HER HOUSE & WAS STARING AT THE EXPLODING VOLCANO, WAS INSTANTLY STRUCK by a huge rock spewed out of the volcano! Scores of her neighbours also met a similar fate.–In fact, the entire village was destroyed! The last thing that Suzy remembered is that just after rushing out of her house to look at the volcano, the earth suddenly trembled & shook, & she heard the roar of the quake as she fell to the ground!

WHEN SHE FIRST AWOKE & BEHELD THE DESTRUCTION AROUND HER, & found her own house reduced to rubble, as she sat up amidst the ruins she was amazed that she felt no pain!–It seemed as if she had somehow survived it all without even a scratch! But, when she looked down & saw her own body lying lifeless on the ground, the realisation of what had actually happened suddenly struck her!–“Oh my God!–I’m dead!” she gasped!

THEN, LOOKING SKYWARD, SHE BEHELD THE MOST SPECTACULAR SIGHT SHE HAD EVER SEEN!–Silently floating over the site of destruction was a huge celestial Spacecraft, glowing & glistening in a pure white radiant light! As the huge ship hovered overhead, dozens of its crew-members effortlessly flew out of the opening on its underside! One of them flew directly down towards her, & with a warm smile said, “Greetings, Suzy! Fear not!–For we have been sent by our King to take you with us to His great Space City!–A wonderful place has been prepared for you There!”

ALTHOUGH SHE’D NEVER MET THIS MAN WHO FLEW DOWN FROM THE SKY, his kind face & warm, assuring touch comforted her & made her feel that allwas well. As she rose up out of her body, she found she was literally lighter than a feather & was able to effortlesslyglide up throughtheair with this Celestial Stranger, joining several others who had also perished in the disaster.

AS SUZY & HER GUIDE APPROACHED THE SHIP, THEY WERE BATHED IN THE WARM GOLDEN GLOW EMANATING FROM ITS CENTER, & she felt more love than she ever had in her entire life! Although she had never met any of the other Celestial beings on the ship, she immediately felt at ease in their presence! They all smiled warmly at her & greeted her as if they’d known her all of her life!–And she realised that, like her, they were all children of the King of Love, & were therefore her brothers & sisters!

THEPOWERFUL & AUTHORITATIVECELESTIAL BEING WHO SEEMED TO BE IN CHARGE THEN ANNOUNCED to Suzy & all of the other newcomers, “Welcome aboard! The King has sent us to greet & welcome you into the Unseen Realm, & to escort you safely back to His Headquarters, the great Space City! We will now be leaving Earth for our Heavenly destination! Please feel free to ask any questions you may have to any of our flight-attendants & crew-members, for we are here to serve you!–Have a pleasant voyage!” Then suddenly–WHOOOSH! The great ship silently took off at a speed that Suzy had never before imagined!

THE EVENTS PORTRAYED IN THIS STORY ARE NOT MERELY SCIENCE FICTION, NOR SOMEONE’S WILD IMAGINATION, but a glimpse into actual realities which are regularly taking place! With increasing frequency we see & hear about great disasters in the news: Earthquakes, volcanic eruptions, mudslides, cyclones, floods, fires, air-crashes, etc., in which hundreds & sometimes thousands of lives are swept out of this life into the next!

IN SUZY’S CASE, THE SEEMING CURSE OF A SUDDEN UNEXPECTED DEATH WAS ACTUALLY A BLESSING IN DISGUISE, for she went on to a better World & a better Life, relieved of all of the hardships & evils of her Earthly existence! The King of Love Whom the pilgrims told Suzy about, whose Kingdom she became a part of, is God’s Own Son, Jesus, Who loves & wants to give Eternal Life to all who will simply ask Him into their hearts!

THE AMAZING CELESTIAL SPACECRAFT IS A HEAVENLY VEHICLE OF LIGHT, many of which often appear in our night skies as signs & wonders, showing men that indeed we are not alone on our planet, but are being watched over by intelligent beings far superior to ourselves!–The Angels of God! However, these Heavenly craft usually remain invisible, operating behind the veil of the Fifth Dimension, the Spirit World.

WHEN THE TIME COMES FOR YOU TO LEAVE THIS LIFE, WILL YOUR SPIRIT, LIKE SUZY’S, BE RECEIVED & SHUTTLED AWAY TO GOD’S GREAT HEAVENLY SPACE CITY?–A Paradise which the Bible describes in detail as being 1500-miles high, wide & long, where Jesus has prepared crystal-golden mansions for all who love & receive Him!

OR WILL YOU SINK DOWN INTO THE BOWELS OF THE EARTH like those in Suzy’s village who rejected Jesus & His Message, to await your final fate? Of course, those who never heard about the Lord & His Word, will be mercifully instructed after leaving this life, & given the opportunity to receive or reject God’s Son & Salvation in the future.–The same choice you are faced with now!

WHICH WILL IT BE FOR YOU?–You can receive Jesus & His free Gift of Eternal Life right now by sincerely praying this little prayer: “Dear Jesus, I believe that You are the Son of God & that You died for me. Please forgive me for all my sins. I now open the door of my heart & I ask You, dear Jesus, to please come in & give me Your free Gift of Eternal Life!–In Jesus’ name I pray. Amen.”

The Princess' Wedding
The Incredible Journey
New World Fliers!
The Judges of Tomorrow