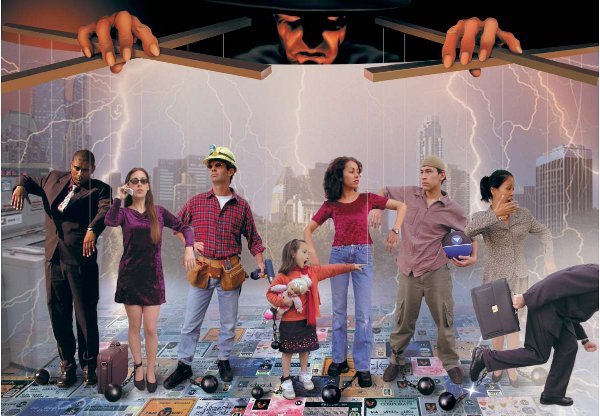 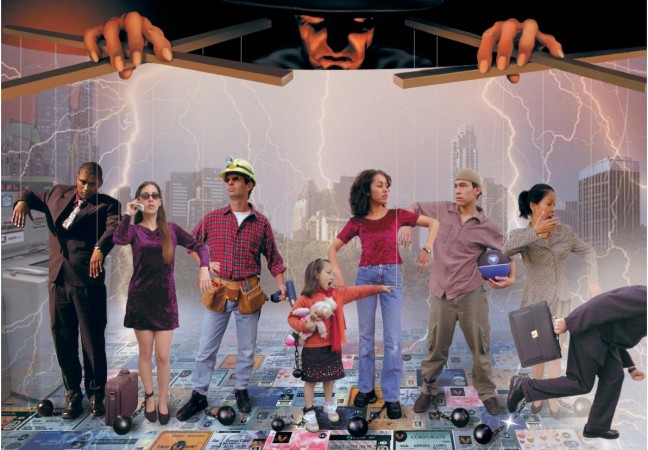 ARE WE IN DANGER of becoming mere puppets, manipulated and controlled? If so, by whom? Is our future already written, our fate sealed? Or is there a way out?

The answers to these questions were revealed to an old man named John nearly 2,000 years ago. Hideous beasts, a seven-headed dragon, four mysterious horsemen, and other creatures both angelic and demonic competed for space in John’s vision. That vision is described in the Bible’s grand fi nale, the book of Revelation, also called the Apocalypse.

One of the principal characters of Revelation is a man who will rise to head a global government. He is symbolized in John’s vision as a monstrous beast, and in another book of the Bible John calls this man “the Antichrist.” The Bible also tells us that his reign will begin soon, last seven years, and end at the cataclysmic Battle of Armageddon.

The savior-like Antichrist will at fi rst enact polices that will be hailed as masterful breakthroughs in bringing about world peace and economic stability, but in the last three and a half years of his reign his government will become the most oppressive dictatorial regime in all of history. John’s description of how “the Beast” will control and manipulate the world seemed impossibly far-fetched– until now.

In the thirteenth chapter of the book of Revelation, John sees two beasts. The fi rst represents the Antichrist, the other a false prophet–his chief aide–who deceives the world, makes an image to the Antichrist, and brings the image to life:

To give “life” to an image, possibly some sort of computerized robot, is no longer an alien concept–not in light of the many advances being made in artifi cial intelligence. But what about the last part of this passage? How could the Antichrist possibly control all commerce worldwide through this “mark of the Beast” that is somehow linked to the number 666? Thanks to modern technology, cashless commerce is not only feasible, but rapidly becoming the norm. Could e-commerce develop into the economic system foretold in this chilling passage?–Yes!

One of the major obstacles to the total acceptance of e-commerce is the current lack of security. Institutions’ computer networks get hacked, and citizens are subject to identity theft through stolen credit cards and credit card information. A fi nal switchover to digital commerce will only be possible when a foolproof identity verifi cation system is perfected, effectively monitoring and controlling both those who operate and those who are served by the brave new computerized world. Thousands of the world’s brightest minds are now working to this end.

One of the most promising technologies has been in existence for some time. It is known as the smart card. It looks like a credit card, but within its plastic exterior beats a heart of silicon–a computer chip that can store vast amounts of personal information, along with digital money.

But smart cards are vulnerable to theft or loss. The logical solution to this and other identifi cation problems is to dispense with the card and simply attach the silicon data chip to its owner. What surer way to accomplish this than to implant this rice-sized biochip under the skin, and what better place than the hand or forehead? Biochips have already been implanted in pets–ostensibly for medical and tracking purposes– and in at least two humans. A British university professor has had several chips implanted under his skin to perform tasks such as opening electronically locked doors and turning on lights or his computer when he walks into the room. A U.S. surgeon did the same. A version of the popular biochip used to track pets has already been developed for human tissue. Could this or something like it be a forerunner of the mark of the Beast? It certainly seems so.

And what about the number 666? It is likely to have something to do with people being assigned a unique multidigit number, along the lines of a personal identifi cation number, or PIN.

A complete switch from clumsy cash to effi – cient electronic currency would certainly make our lives easier by making fi nancial transactions quicker, more convenient, and more secure. However, it would also make our lives more controlled, comparable to the ankle transmitters that some convicted criminals under house arrest or on parole must wear. Your whereabouts could be known at all times, and your privacy would be nonexistent. Every purchase you made, every place you went, every TV show you watched or Web page you perused, every phone call you made could be monitored and recorded in a central database.

And there is one more catch. According to the Bible, the driving force behind the coming one-world order is the most evil entity the world has ever known. The Devil, also known as Satan, will no longer be content to operate behind the scenes–the Beast (Antichrist) will be the Devil incarnate. The Devil’s goal has always been to have people worship him instead of God. In the last half of the Antichrist’s rule, the horrifi c three and a half years that the Bible describes as the “Great Tribulation,” he will pull out all the stops in order to achieve this.

Revelation tells us that accepting the mark of the Beast will not be an entirely fi nancial decision. It will also be a decision to embrace the Beast and what he stands for. We are also told what will become of those who worship the Beast and willingly bear his mark: “If anyone worships the Beast and his image, and receives his mark on his forehead or on his hand, he himself shall also drink of the wine of the wrath of God” (Revelation 14:9-10).

Although the Beast will rant and rave on the world’s stage for a few short years, he and his followers will be the ultimate losers. At the end of the Antichrist’s seven-year reign, Jesus Christ will return with the hosts of Heaven to right all wrongs, and He and those who love and follow Him will emerge from the Great Tribulation as the glorious and eternal winners.

You can be a sure winner too, by accepting Jesus as your Savior. Two thousand years ago when He walked the earth, Jesus gave His life so that you could experience His love and have all the other wonderful gifts He has for you in this life, and live forever in the next. To receive all that, all you have to do is sincerely pray a short prayer like this one:

Jesus, please come into my heart and life. I’m sorry for the things I have done wrong, and I ask for Your forgiveness. I receive You and Your gift of eternal life, and ask You to fi ll me with Your love and peace. Amen.

It’s that simple. Receive Jesus today, and He will never leave you. He will be with you through the troublous times that are soon to come, and beyond! He will cut the strings.

Come!
Teachers of Tomorrow!
The Magic of Music
Peace in the Midst of Storm