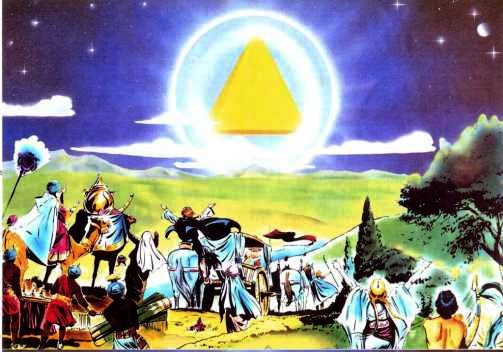 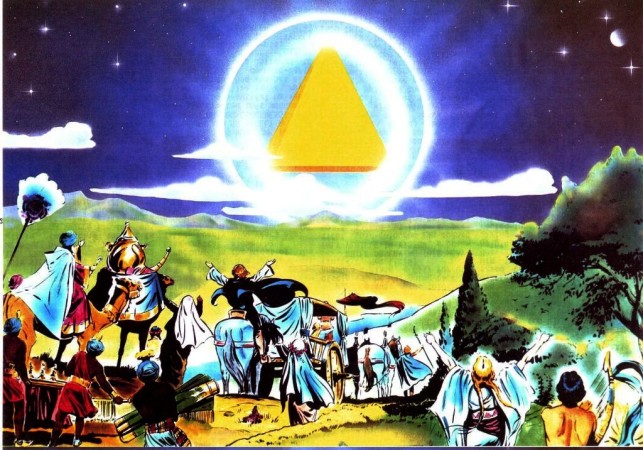 When the great Crystal Ball, all sparkling and blue,
Appeared in the Earth’s starry skies,
The people below who bathed in its glow
Were thrilled as they feasted their eyes!

Within the great Globe, a glorious sight
Inspired the praises of men!
–The City of Gold which lit up the night
Caused hearts to look upward again!

All the World’s squabbles, cruel warring and fights,
Were now but a thing of the past!
For Love had come down from the City of Lights,
And the Earth was at peace at last!

Overwhelmed by the sheer beauty and majesty before them, the travelling band in this picture have paused to sing and shout praises, glory and honour to the mighty King of the magnificent City in the sky! Since the Space King and His marvellous Space City Planet appeared over 300 years ago, life on Earth has changed so drastically and wonderfully that in many ways it’s like another World!

For example, the lush green plain that lies before these travellers used to be the barren wasteland known as the Sahara Desert! But ever since the crystal-gold Pyramid in the gigantic blue Sphere appeared, areas such as this that were once dry and desolate, plagued by unbearable heat and drought, are now like a watered garden!–The soil is rich and fertile, the climate is balmy and temperate and refreshing rains frequently shower the land!

The aging process has slowed down dramatically since the Space City arrived. People in this band who were in their twenties when the City first arrived in the sky, are still strong and healthy and now appear to be in their forties or fifties.–Over 300 years later! Most of the folks in this group can remember the days when the land before them was scorching sand, full of deadly cobras and scorpions, and the only vegetation was thorn shrubs, desert weeds and cactus! These are all eliminated now, as are the man-eating crocodiles, malarial mosquitoes and all other dangerous and bothersome parasites and pests that infested the areas near the river!

Many can still recall the days when great battles and wars were waged in this region, and cruel men fought and killed each other with terrible engines of destruction known as tanks and warplanes, and rained horrible death-dealing bombs and missiles on each others’ cities and villages, killing innocent men, women and children! Those who have been born since the Golden City and its King arrived can hardly believe that such a horrible and cruel World ever existed, for now all war and weaponry have been abolished!

Another reason these pilgrims are so grateful to the Space King is because He and His mighty Flying Horsemen saved them from their enemies who had almost destroyed them 320 years earlier, when a great One-World Government had risen to power and taken over the Earth! Its cruel leader, known as the Beast, demanded that all the World’s people swear their total loyalty and allegiance to him alone!

In fact, this power-mad dictator claimed that he was God, and erected a great computerised robot made as his image, which he demanded that everyone must worship! He and his government’s forces also set up a One-World Credit System in which everyone was forced to receive this bestial tyrant’s Mark and number, permanently branded in their hands or foreheads!–Without it no one was allowed to legally buy or sell!

As the caravan shown here were devout Muslims at the time, they recognised this Beast as an idolater and an evil man and so refused to worship him or accept his Mark! They therefore fled deep into the desert wilderness to escape the World Government’s forces who sought to kill all such rebels!

After almost three years in their wilderness refuge, the able-bodied men joined hundreds of thousands of other anti-Beast forces from surrounding nations to confront the Beast’s armies in a great “Jihad” or Holy War ending in central Palestine! There they joined millions of other anti-Beast troops for a final confrontation with their common enemy’s forces! As the battle raged, the heavily armed and well-trained forces of the Beast and his friends far outnumbered the rebels and soon had the upper hand, and it looked like the rebels were about to be crushed!

It was then, at this crucial moment, that the Space King and His invincible invaders charged out of His Space City on mighty flying white horses!–And defeated and destroyed the cruel forces of the Beast! From this focal point in Palestine, they then spread out to every nation on the face of the Earth, destroying everyone who had worshipped the Beast and received his Mark! The Space King and His flying forces then took over the World!

Like a giant space station, the blue Sphere with its golden Pyramid continued to hover high above the Earth’s surface while the Earth revolved beneath it! It served as the floating Capital for the billions of Flying-People who frequently flew back and forth from their tasks of ruling and reigning over the surviving people of the Earth!

This incredible look into the future is not merely science fiction, but the truth of God as revealed in the Bible!–For according to its many prophecies, Jesus Christ, the Son of God, will soon return “in the clouds of Heaven with power and great glory” (Mt.24:29-31), to rescue all of His people out of the horrible Hell on Earth created by the soon-to-rise bestial World dictator known as the Antichrist! When Jesus comes, He will resurrect the bodies of all of His Saints who have already died, and all of His people will instantly receive powerful new super-bodies that fly up to meet Him in the air!

They will all then fly away with Him to a great Victory Celebration in God’s Heavenly Space City, which will be floating in the sky above the Earth after Jesus returns! The Bible tells us that this wonderful Heavenly City is a gigantic 1,500 miles long, wide and high! (Rev.21:16) After our Celebration there, Jesus and all of His resurrected Saints will return to Earth to conquer and destroy the evil Antichrist and his forces in a great slaughter in Palestine known as the “Battle of Armageddon!” They will then set up the Kingdom of God on Earth for 1,000 years! (Rev.19:6-9; Rev.20:1-6)

The billions of natural, normal people who remain on the Earth, like this travelling band from North Africa, will then be taught and helped by the Lord Himself and His Own saved children who will rule over the Earth people in power and love!

Are you one of the saved who has the brightest and happiest future to look forward to, ruling and reigning with Jesus during this time? You can make sure you’re saved by simply praying this little prayer and receiving Jesus into your heart:

“Lord Jesus, I believe that You are the Son of God and that You died for me. Please forgive me for all my sins. I now open the door of my heart and ask You, dear Jesus, to please come into my heart and give me Your free Gift of Eternal Life!–In Jesus’ name I pray. Amen.”

1 thought on “The City in the Sky”