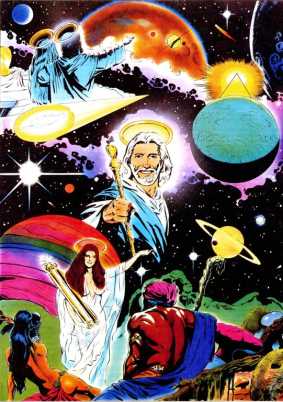 IT WASN’T UNTIL THE ADVENT OF WORLD WAR II THAT UNBELIEVING MODERN MAN BECAME AWARE THAT WE ARE NOT ALONE in this vast Universe! Many of the radar tracking stations that sprang up during the War reported sightings of Unidentified Flying Objects (UFOs) or “flying saucers”. These mysterious vehicles were tracked travelling across our skies with speed and manoeuvreability which no human pilot could possibly survive!

STUDIES HAVE REVEALED THAT SUCH SIGHTINGS WERE ALSO MADE THOUSANDS OF YEARS AGO!–In fact, ancient documents and manuscripts provide records not only of such sightings, but of actual “close encounters” with intelligent Beings from another World!

ALTHOUGH THESE VISITORS HAVE AT TIMES DEMONSTRATED INCREDIBLY UNEARTHLY POWERS, in almost all instances they have simply delivered a message, rescued someone from a life-threatening situation or accomplished some other benign purpose, and then left Mankind to carry on without their visible assistance.–In other words, for thousands of years we have been under their observation, but they only intervene and make themselves known in the rarest of circumstances!

AT ONE POINT THE LEADER, THE ACTUAL HEAD OF THE GREAT UNIVERSAL EMPIRE FROM WHICH THESE UFOS ORIGINATE, CAME TO OUR PLANET and lived among us as one of us. During His life He selected a handful of men and instructed and enlightened them in the ways of His all-powerful Empire. The many extraordinary signs and wonders He performed convinced multitudes that a far more powerful and superior civilisation to our own did indeed exist!

ALTHOUGH HE POSSESSED THE POWER TO TAKE OVER THE ENTIRE WORLD and crush all opposition in an instant, He chose rather to simply enlighten and teach those who were open to His Message and then let them carry on His work of reaching and teaching others who would voluntarily accept Him as their King. When His mission here was accomplished, He even allowed His enemies to execute Him, but after several days He arose from His grave and appeared to many of His loyal subjects. On bidding them farewell, He rose into what they described as a cloud, which then whisked Him away!

MOST PEOPLE TODAY ARE NOT AWARE THAT THE LEADER OF THIS UNIVERSAL EMPIRE IS GOING TO RETURN VERY SOON, and that the day of His Forces remaining unknown and behind the scenes is almost over! For Mankind is now racing hell-bent toward its own destruction!–And if these Alien Forces did not finally step in and forcibly intervene, life on Earth would cease to exist due to modern Man’s present nuclear and biological insanity!

ALL INDICATIONS POINT TOWARDS AN INVASION!–When literally billions of UFOs will fill the Earth’s skies! The cruel and hateful men of war who brought the World to the brink of destruction will then be destroyed by them! The Invaders will destroy and eliminate all opposition, and then rule over the surviving humans on the Earth for a thousand years!

AFTER THIS THOUSAND YEARS THE INVADERS WILL GIVE MANKIND A GREAT and FINAL TEST in which all controls and constraints will be lifted. Multitudes will rebel and revert back to the warlike ways of their dark past, and will rise up and attempt to destroy the humans who have become loyal subjects and followers of the Invaders!

THE LOYALISTS WILL THEN BE TELEPORTED OFF OF THE EARTH and A GREAT ATOMIC FIRE WILL POUR OUT of the Invaders’ gigantic, larger-than-the-Moon Super-Ship which will be orbiting the Earth during the Thousand-Year period! This fire sets off the biggest cataclysm the World has ever known!–The entire atmosphere ignites and explodes in an incredible nuclear reaction that causes the surface of the Earth to melt!–The great mountains will be cast down and the oceans evaporated as the entire surface of our Planet becomes a molten ball!

THEN THE GREATEST WONDER BEGINS AS THE VERY FORCES OF LIFE and CREATION ARE UNLEASHED FROM THE SUPER-SHIP and the surface of the Earth is miraculously re-made into an entirely New Earth! The formerly barren deserts, polar regions, mountains and sea beds are suddenly transformed into beautiful lush green fields and forests! Animal life is instantly re-created, and all of the beasts are tame, gentle and vegetarian! Billions of men, women and children who died in Ages past are then rematerialised and placed in this beautiful, temperate Paradise!

THE GIGANTIC PYRAMID-SHAPED CAPITAL OF THE GREAT SPACE-EMPIRE will then descend from the Super-Ship that contained it! Measuring 1,500 miles high by 1,500 miles wide and long, this incredible golden Pyramid gently settles upon the New Earth to headquarter the billions of Invaders!

THE FORCES OF THE SPACE KING THEN TEACH and TRAIN THE BILLIONS OF INHABITANTS OF THE NEW PLANET all about their King and His Plan and His Love!–Until finally all of the rematerialised men on Earth have learned their lessons, served their sentences and are all forgiven and united in a wonderful fully-restored and reconciled World!

THEN, HAVING FULLY UNITED THE WORLD IN HIS LOVE, THE KING SENDS HIS REPRESENTATIVES TO OTHER INHABITED WORLDS throughout the Universe! The bodies of His representatives are able to fly not just at the slow speed of light, 186,000 miles per second, but at the speed of thought!–Thus they can leave their Capital on Earth and arrive in the farthest reaches of Space in an instant!

THIS INCREDIBLE LOOK INTO THE FUTURE IS NOT MERELY SCIENCE FICTION, but is taken from the Words of the Creator of the Universe as found in the Holy Bible! Since the beginning, God has sent His agents, the angels, to visit this World, assist His people, deliver messages to His Prophets and occasionally intervene in man’s affairs. They usually travel in circular vehicles of light or energy, known today as UFOs!–Or halos!

HE EVEN SENT HIS OWN SON, JESUS CHRIST, TO THIS EARTH TO REVEAL HIS LOVE and SALVATION TO ALL WHO WOULD RECEIVE IT. Jesus said, “All power is given to Me in heaven and in Earth!” (Mt.28:18) He possessed unlimited power and authority and demonstrated it by raising the dead, cleansing lepers, walking on water and even commanding the winds and waves of a violent storm at sea to stop! But He allowed His enemies to capture and kill Him that He might die and suffer for us, in our place, so we could be saved!

THREE DAYS AFTER HE WAS EXECUTED HE ROSE FROM THE DEAD IN A SUPERNATURAL RESURRECTION BODY in which over a 40-day period He personally appeared to over 500 of His followers! Before leaving this Earth He promised that one day He would return again, “in the clouds of Heaven, with power and great glory” (Mt.24:29-31), to save the World from complete destruction and to resurrect and raise all of those who love and believe in Him!

THEN HE and HIS BILLIONS OF RESURRECTED SAINTS WILL DESTROY THE ANTICHRIST FORCES that rule this World! They will then establish a Thousand-Year Reign of peace on Earth! At the end of this period God will melt the entire surface of the Earth in a great flood of fire as we described! (Rev.19; Rev.20; 2Pet.3:10-13)

A BEAUTIFUL NEW EARTH WILL BE CREATED and THE GREAT HEAVENLY SPACE CITY WILL DESCEND UPON IT to be the Heavenly Home for all of God’s resurrected saved Saints! They will lovingly rule over and teach the billions of folks outside of the City on the New Earth, until eventually all of them are brought into fellowship and unity with their loving Maker! (Rev.21; Rev.22; Phi.2:10,11; 2Pet.3:9)

GOD ONLY KNOWS WHAT OTHER WORLDS THE LORD WILL THEN HAVE HIS CHILDREN COLONISE and CONQUER WITH HIS LOVE!–After all, what’s the whole Universe and all of Space for if He’s only interested in this one little Planet? Perhaps we’ll fly to other Worlds to love, save, teach and train others!–Like the beautiful Saint in this picture who is bearing the Words of God to aliens of another Planet!

TO BECOME AN ETERNAL MEMBER OF THE SPACE KING’S UNIVERSAL EMPIRE, all you have to do is ask Him into your heart!–Then His Word says you become a “new creature in Christ!–A “stranger and a pilgrim, no longer of this World, but born again and translated into Christ’s Kingdom of Light!” (2Cor.5:17; Heb.11:13; Jn.17:16; Jn.3:3; Col.1:13)–A wonderful, thrilling Heavenly Tomorrow awaits all those who receive the King today!