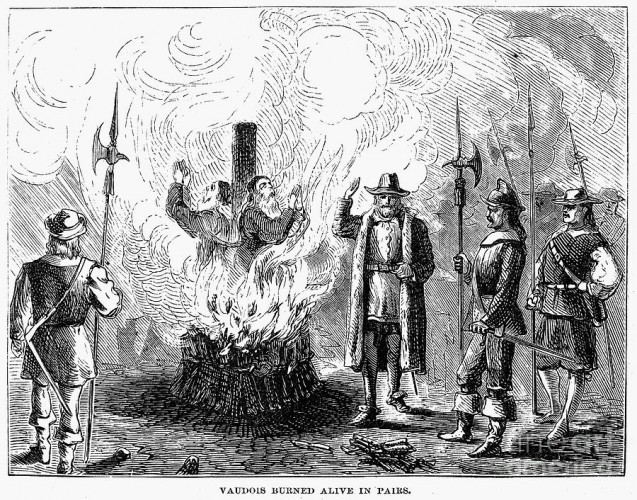 Daniel 7:21 I beheld, and the same horn made war with the saints, and prevailed against them;

Revelation 13:7 And it was given unto him to make war with the saints, and to overcome them: and power was given him over all kindreds, and tongues, and nations.

The eschatological view of Daniel and Revelation which the early Protestants had is known as Historicism. This is opposed to “Futurism.” According to what I read, it was a Jesuit priest who developed the Futurism view of prophecy! He did it so the Protestants could get their eyes off the Pope being the Antichrist! This of course was well received by the Pope and Roman Catholic church hierarchy.

“The Jesuits were commissioned by the Pope to develop a new interpretation of Scripture that would counteract the Protestant application of the Bible’s prophecies regarding the Antichrist to the Roman Catholic Church. All the reformers’ studies pointed the finger directly at the Roman Catholic Church as the Antichrist power described in Daniel as the “little horn.” Source: Wikimedia Commons

Francisco Ribera (1537-1591), a brilliant Jesuit priest and doctor of theology from Spain, answered Papacy’s call. Like Martin Luther, Francisco Ribera also read by candlelight the prophecies about the Antichrist, the little horn, the man of sin, and the beast of Revelation.

He then developed the doctrine of futurism. His explanation was that the prophecies apply only to a single sinister man who will arise up at the end of time. Rome quickly adopted this viewpoint as the Church’s official position on the Antichrist.

In 1590 Ribera published a commentary on the Revelation as a counter interpretation to the prevailing view among Protestants which identified the Papacy with the Antichrist. Ribera applied all of Revelation to the end time rather than to the history of the church. Antichrist, he taught, would be a single evil perso who would be received by the Jews and who would rebuild Jerusalem.”(Quoted from http://amazingdiscoveries.org/RT_encyclopedia_Futurism_Jesuit_Ribera)

Some examples of persecutions of Christians by the Pope:

In 1208 the Albigenses (also known as Cathars): “In the sunny south of France, in Provence and Catalonia, lived the Albigenses. They were a civilized and highly educated people. Among these people there sprang up an extensive revival of true religion, and one of its natural effects was a bold testimony against the abominations of apostate Rome. Here is Sismondi’s History of the Albigenses. On page 7 he says of them and of the Vaudois: “All agreed in regarding the Church of Rome as having absolutely perverted Christianity, and in maintaining that it was she who was designated in the Apocalypse (book of Revelation) by the name of the whore of Babylon.” Rome could not endure this testimony; she drew her deadly sword and waged war against those who bore it. In the year 1208 the Albigenses were murderously persecuted. Innocent III (what a mockery his name!) employed the crusaders in this dreadful work. “ (–Romanism and the Reformation 5. INTERPRETATION IN PRE-REFORMATION TIMES by Henry Grattan Guinness)

“In 1211, more than 80 Waldensians were burned as heretics at Strasbourg” http://metalonmetalblog.blogspot.jp/2011/10/massacres-against-waldensians.html

The Massacre of Mérindol took place in 1545, when Francis I of France ordered the Waldensians of the city of Mérindol to be punished for dissident religious activities. (http://en.wikipedia.org/wiki/Massacre_of_M%C3%A9rindol)

In 1655, Catholic forces under the Duke of Savoy carried out a notorious massacre of Waldensians in the Piedmont. (http://www.executedtoday.com/2011/04/24/1655-massacre-of-waldensians/ )

In 1655 the Duke of Savoy commanded the Vaudois (another name for the Waldensians) to attend Mass or remove to the upper valleys, giving them twenty days in which to sell their lands. … On 24 April 1655, at 4 a.m., the signal was given for a general massacre, the horrors of which can be detailed only in small part. The massacre was so brutal it aroused indignation throughout Europe. Oliver Cromwell, then ruler in England, began petitioning on behalf of the Vaudois, writing letters, raising contributions, calling a general fast in England and threatening to send military forces to the rescue. The massacre prompted John Milton’s famous poem on the Waldenses, “On the Late Massacre in Piedmont”. http://metalonmetalblog.blogspot.jp/2011/10/massacres-against-waldensians.html

The Waldenses were continuously persecuted by the Popes from 1211 to 1655. That’s 444 years of persecutions!

1553 – 1558 Roman Catholic Queen Mary I of England (aka “bloody Mary”) attempts to bring England back under the yoke of papal tyranny. During her reign, approximately 200 men and woman are burned to death at the sake. Her victims include bishops, scholars, and other Protestant leaders.

The Saint Bartholomew’s Day, massacre of, murder of French Protestants, or Huguenots, that began in Paris on Aug. 24, 1572. It was preceded, on Aug. 22, by an attempt, ordered by Catherine de’ Medici, on the life of the Huguenot leader Admiral Coligny. The failure of the attempt led to formulation of the plan for a general massacre. The opportunity was furnished by the presence in Paris of many of the Huguenot nobility for the wedding of Henry of Navarre (later King Henry IV) and Catherine’s daughter, Margaret of Valois. Involved in the scheme were the duc d’Anjou, later King Henry III; Henri, 3d duc de Guise (see under Guise); and the reluctant King Charles IX. Coligny was the first victim; his death was followed by the killing of minor leaders and of all Huguenots within reach of the soldiery and the mob. The massacre continued even after a royal order to stop, and it spread from Paris into other sections of France. Massacres continued into October reaching the provinces of Rouen, Lyons, Bourges, Orleans, and Bourdeaux. An estimated 3,000 were killed in Paris, 70,000 in all of France. News of the massacres was welcomed by the Pope and the King of Spain. (From http://www.infoplease.com/encyclopedia/history/saint-bartholomew-day-massacre-of.html )

This bloody, religious war is planned, instigated, and orchestrated by the Roman Catholic Jesuit order and its agents in an attempt to exterminate all the Protestants in Europe. Many countries in central Europe lose up to half their population.(From http://amazingdiscoveries.org/R-Reformation_Rome_crusade_slaughter )

Death tolls are given by historians such as Will Durant, who, in The Reformation (1957), cites Juan Antonio Llorente, General Secretary of the Inquisition from 1789 to 1801, as estimating that 31,912 people were executed from 1480-1808. He also cites Hernando de Pulgar, a secretary to Queen Isabella, as estimating 2,000 people were burned before 1490. Philip Schaff in his History of the Christian Church gave a number of 8,800 people burned in the 18 years of Torquemada. Matthew White, in reviewing these and other figures, gives a median number of deaths at 32,000, with around 9,000 under Torquemada [1]. R. J. Rummel describes similar figures as realistic, though he cites some historians who give figures of up to 135,000 people killed under Torquemada. This number includes 125,000 asserted to have died in prison due to poor conditions, leaving 10,000 sentenced to death.

Now let’s go to the the 20th century.

Surpisingly few know that Nazi extermination camps in World War II were by no means the only ones in Europe at the time. In the years 1942-1943 also in Croatia existed numerous extermination camps, run by Catholic Ustasha under their dictator Ante Paveli, a practising Catholic and regular visitor to the then pope. There were even concentration camps exclusively for children!

In these camps – the most notorious was Jasenovac, headed by a Franciscan friar – orthodox-Christian Serbians (and a substantial number of Jews) were murdered. Like the Nazis the Catholic Ustasha burned their victims in kilns, alive (the Nazis were decent enough to have their victims gassed first). But most of the victims were simply stabbed, slain or shot to death, the number of them being estimated between 300,000 and 600,000, in a rather tiny country. Many of the killers were Franciscan friars. The atrocities were appalling enough to induce bystanders of the Nazi “Sicherheitsdient der SS”, watching, to complain about them to Hitler (who did not listen). The pope knew about these events and did nothing to prevent them. (from: http://www.truthbeknown.com/victims.htm )

KJV the most accurate English translation of the Bible
Famous Preacher and American Politician, Chuck Baldwin, changes his position on the 70th Week of Dan...
Homosexuality -- The Biblical Viewpoint
What early Protestants had to say about the 70th Week of Daniel

2 thoughts on ““War with the Saints””