Each statement after the graphic preceeding it is the first paragraph of the article. Click the graphic or the title to read more!

Proof the Jesus is the Messiah Hundreds and even thousands of years BEFORE Jesus was born in Bethlehem, the Old Testament Prophets predicted His coming. Their predictions were not just general ones that "a Messiah, a Saviour, will come" etc., but SPECIFIC prophecies about places, times and events that have been fulfilled in only ONE person who has ever lived--JESUS of Nazareth! In this brief lesson we have chronologically arranged several of the most outstanding Old Testament Messianic prophecies in the actual verbatim text of the Scriptures and followed them with their New Testament fulfillments. ...Read more!

Who is Jesus? DO WE KNOW THAT JESUS ACTUALLY EXISTED AS A PERSON? Yes!--To the unprejudiced historian, the historical facts regarding Jesus are as definite and evident as those of Julius Caesar. Not only do we find an accurate portrait of Him in the documents of the New Testament, but dozens of ancient non-Biblical manuscripts confirm that Jesus was a genuine historical figure who lived in Palestine in the early part of the first century. Concerning the testimony of the many ancient secular accounts of Jesus, the Encyclopedia Britannica states: "These independent accounts prove that in ancient times even the OPPONENTS of Christianity never doubted the historicity of Jesus, which was disputed for the first time--and on inadequate grounds--by several authors during the 19th and at the beginning of the 20th centuries." ...Read more!

The Name of Jesus! IT'S ALMOST PRESUMPTUOUS TO TALK TO GOD: Jesus is my Mediator. I really don't know how to talk to God--He's too big for me! MAYBE THAT'S WHY PEOPLE WHO PRAY, "FATHER GOD" DON'T GET TOO MUCH from their prayers. They don't have faith that they're getting through because they're talking to somebody too big and too great and too far off and they don't have the faith that He's listening. But Jesus has been here and he can understand. I always talk to Jesus in my prayers. ...Read more! 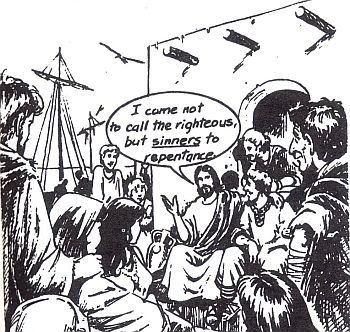 The Lover of all Lovers He came to Earth as a tiny, weak and helpless baby, born to a simple, humble young girl who miraculously conceived the Child, having never slept with any man! In fact, the news of her pregnancy was so shocking that when the man to whom she was engaged to be married learned about it, he promptly decided to break the engagement and call off the wedding.--Until a powerful Heavenly Being intervened and instructed him to stay with her and rear and protect this very special Child that she was carrying.
Although ordained and predestined to be a KING, in fact the King OF kings, He was not born in a palace with famous and glorious members of the court in attendance and the honour and praise of the System. Instead, He was born on the dirty floor of a barn amidst the cattle and the donkeys, wrapped in rags and laid to rest in the animal's feed-trough.
And though His birth brought no great fanfare or recognition from the institutions and governments of Men, that night on a nearby hillside, a motley crew of poor shepherds were awestruck as a brilliant, ... read more! 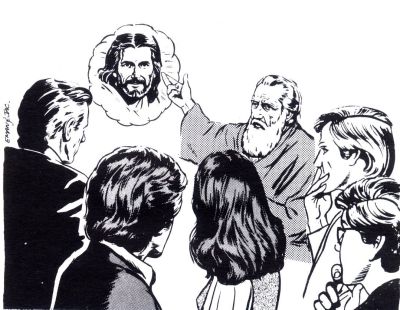 What Think Ye of Jesus? If they reject the gospel, then the Lord allows the Devil to sort of blind their eyes! (Maria: It says, "In whom the god of this World hath blinded the minds of them which believe not, lest the light of the glorious Gospel of Christ, Who is the image of God, should shine unto them.") (2Cor.4:4)
Having rejected the Gospel, the Lord then allows the Devil to blind them and give them strong delusion that they might believe a lie, that they might be damned. (2Th.2:10-12) When they reject it, they've rejected the Holy Spirit and committed the unpardonable sin in rejecting Jesus Christ. (Mat.12:31,32) ... Read more! 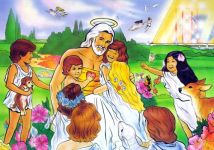 Your Best Friend DO YOU KNOW WHO THE KIND LOOKING MAN IN THIS PICTURE IS?--His name is Jesus, and He wants you to know that He loves you!

JESUS ALWAYS SHOWED A SPECIAL LOVE, UNDERSTANDING and CONCERN FOR THE CHILDREN, and was always their Friend. The Bible tells us that one day when Jesus was speaking to a crowd of people, some mommies and daddies "brought young children to see Him." (Mark 10:13) But it says that His followers tried to turn away those who brought the children, telling them that their Master should not be disturbed or interrupted. ... Read more!

The Man of Love WHO IS THIS AMAZING MAN OF LOVE?--His Name is Jesus, and He wants you to know that He loves you!


JESUS IS NO ORDINARY MAN.--Nor is He merely a great teacher, rabbi, guru, or even a prophet. In a way, He is all of these, but much more. For unlike the other great religious teachers who came before Him--and those who came after Him--Jesus not only spoke about Love and spoke about God, but He was Love and He was the Son of God, so He really knew what He was talking about!

THE BIBLE TELLS US THAT "GOD IS A SPIRIT," and that "God is Love."--John 4:24; 1John 4:8. God is the Almighty Spirit of Love Who created all things. He is the Power of the Universe, so great and so high, so mighty, that He is far above and beyond our limited human understanding!

GOD IS ALL-POWERFUL, ALL-KNOWING AND PRESENT EVERYWHERE.--And that's just too big a concept or idea for us to grasp! But He loves us very much, and wanted us to be able to know and love Him. So to show us His Love and to help us to understand Him, He sent His Own Son, Jesus Christ, to Earth in the form of a man, so that we could see through Jesus what God Himself is like. Jesus brought God down to our lowly human level of perception. ... Read more!

The Easter Story I'M SOMEWHAT OF AN ICONOCLAST, AS YOU KNOW, WHICH MEANS WHAT? (SUE: IDOLSMASHER!) And one of the idols of the organised church is what? (Alfred: Their traditions.) Their traditions. And some of their favourite traditions are what? (Alfred: Christmas & Easter?) Their high holy days, their holidays as we now call them. What people today call holiday, that word came from Holy Day, think of that! They're anything but holy nowadays, in fact they're quite unholy!


SO SOME OF THE FAVOURITE TRADITIONS OF THE CHURCH ARE HIGH HOLIDAYS, HOLY DAYS, & they are really held very holy. Oh my, when I was young if you didn't at least go to church on Christmas, you certainly would go to church on Easter! And in the churches I went to, if you didn't go to Easter Sunrise Service on Easter Sunday morning you weren't even a good Christian, right? It's early in the morning when the sun's rising. ... Read more!

Happy Birthday Jesus! NOW, I DON'T SAY IT'S BAD TO GIVE SOMEBODY A GIFT for Christmas if you want to. We give away gifts every month, thousands of them, to the missionaries and the people who need them. And we give them what they need too!--Money! But wasting your money on presents for people when you're not even sure what they need or would like or would use is foolish. I have received more junk for Christmas that I just turned around and gave away.
IMAGINE HOW MUCH THE WHOLE FAMILY MUST WASTE on Christmas if they have a tree which costs money and all those decorations which cost money. ...read more!