Exposés of conspiracies and false teachings

Each statement after the graphic preceeding it is the first paragraph of the article. Click the graphic or the title to read more!
Peter Pan, Walt Disney!

From whence come wars? COUNTRIES USED TO GO TO WAR JUST FOR PRIDE over some incident because they were offended or one king made a bad remark about another king and boom, boom, boom! But in modern years, recent years, they go to war for commercial reasons, they're trade wars. NEARLY EVERY ONE OF AMERICA'S WARS WERE FOR SOME KIND OF TRADE ADVANTAGE or money or for territory.--Which of course were always fought under different excuses, even as far back as the Civil War.

Why Wars? IT'S ALMOST UNBELIEVABLE THAT MEN COULD CONCEIVE OF ANYTHING AS HORRIBLE AS WAR AT ALL, much less a nuclear war, literally knowing that they're contriving the deaths of millions--not just soldiers--but everybody!--Men, women, children, old folks!--Horrors! They "cause their children to pass through the fire", the Lord says. (Lev.18:21; Deut.18:10; 2Kg.17:17)...

The Big Lie! HITLER SAID IN "MEIN KAMPF" THAT IF YOU TELL A LIE FOR THE PURPOSE OF PROPAGANDA, TELL A BIG ONE! Because the BIGGER the lie is, the more people are apt to believe it, because they can't possibly believe you would dare to tell such a big lie unless it was the truth! So the devil was smart with evolution. He told the big lie....

Whose fool are you? - A discourse of Evolution vs. Creation IT'S SO RIDICULOUS FOR MAN TO NOT BELIEVE IN GOD!--Because man can't help but believe in God if he just looks at Creation! If you're not an absolute fool, if you have a reasoning mind at all, all you have to do is look at the Creation to know Somebody had to design it, pattern it, & put it together & make it work like it does!.....

When Christianity was infiltrated with Paganism! -- The Emperor's great mistake! I've often said that the Muslims were just tools in the Hands of God to punish the Christians for their sins during the rise of Mohammed and Islam. Because by that time, the 6th and 7th centuries, Christianity had become as idolatrous and as wicked and as corrupt as any kind of paganism, and their temples were filled with idols, statues of Mary and Joseph and blah blah! They just cleaned out the old pagan idols and put in new ones, that's all. That's all the Romans did. They even used some of the same old heathen temples for their churches. That's what the first Christian church building was in about 244 A.D., did you know that? It was not built, it was a former pagan Roman heathen temple!

There are Absolutes! The whole idea of new math is anti-God: "There are no absolutes." I'm sure the whole purpose is to destroy confidence in God, the Absolute! Outside of God's Creation proving the existence of God, mathematics proves the order of the universe. Math proves there is rhyme and reason to things.....

The Green Paper Pig IT WAS SUMMER IN THE MIDEAST, and we were fleeing through this canyon or wadi where a stream flowed (I know now it was the Jordan River), towards some kind of sea or lake like the Dead Sea (which I know now it was) where we were to get on some boats to escape across to the other side. But then as a last resort, someone unleashed on us this big imaginary monster--a gigantic Green Pig--and he was huge, like a mechanical elephant or one of these mammoth monster-like parade balloons, and if you believed he existed he could destroy you! He was charging down the Jordan Valley, trampling on some people and devouring others, when I shouted at them: "He doesn't really exist! It's just in your mind! You must rebuke him and he'll go away!"...

Satan, King of Empires THERE'S AN AMAZING DESCRIPTION OF SATAN IN THE 28TH CHAPTER OF EZEKIEL WHERE HE'S CALLED THE PRINCE OF TYRUS. Tyre itself was the ancient capital of Tyre and Sidon, or Phoenicia, today Lebanon. I was just checking on the story of John Todd where he says it's a perfect description of Satan, and it certainly sounds like it, the "anointed cherub," etc.....

WAR--BOOM--BUST ECONOMY "WAR" CALLS FOR AN INCREASE OF FACTORY OUTPUT (WEAPONS, ETC.). FACTORY INCREASE MEANS MORE WORKERS BEING HIRED AND PAID. This means more people have more money to buy products of all other industries (IDOLS). This increase in jobs and spending is a "BOOM," but this increase in money leads to inflation. INFLATION is when the value of the dollar drops (or the amount of things it can buy drops)....

Who are the Racists? WHAT HAVE THE WORLD'S WHITES GOT TO BE PROUD OF! They have nearly wrecked the world! When the dark-skinned Romans of Southern Europe first came in contact with the Whites of Northern Europe, they thought them so beautiful because of their white skins and golden hair, that they called them angels, from which we get our term "Anglos" such as "Anglo-Saxons"--but they soon found out that they were some of the cruelest barbarians they had ever run into, who burned and pillaged and sacked and tortured the much more refined and darker-skinned civilisations of Southern Europe! It was these White Devil's Angels who invaded, and all but destroyed the much more learned religious, philosophical and peaceful civilisations of Southern Europe, the Near East, the Far East, and around the globe with their predatory, warlike brutality! 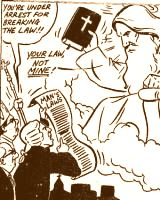 Man's Illegal Laws! From time to time you may hear or read about Christian witnesses or missionaries who are accused of "breaking the law" or of doing something "illegal".--Or you may hear that a Christian group has been expelled from some country and wonder "what they did wrong". The fact is, they may have done NOTHING wrong, other than obey the law of GOD!--For sad to say, in today's modern World, a good MANY of MAN'S laws are in DIRECT CONFLICT with the laws of GOD!

Deborah and Bill Davis' Dirty Book! This article is a rebutal to a book written in 1984, "The Children of God The Inside Story" By The Daughter Of The Founder, Moses David Berg by Deborah (Linda Berg) Davis with Bill Davis

I was raised in the Hegewisch neighborhood on the southeast side of Chicago, Illinois, served in the USAF from 1970 to 1974, and became a full-time missionary for Christ living 40 years in Japan, 3.5 years in Russia, and a few months in other countries such as Finland, Poland, Estonia, Latvia, South Korea, Taiwan and mainland China where I also served the King of Kings, Jesus, as an Ambassador for His Kingdom.

I have been unemployed since March 2020 due to the pandemic. Pandemic assistance from the US government will be terminated from September, 2021. If you love Deep Truths, please consider sending a donation toward my support and ministry of sharing God's truth with the world. Thank you and God bless you!